My Boyfriend Fake Proposed To Me 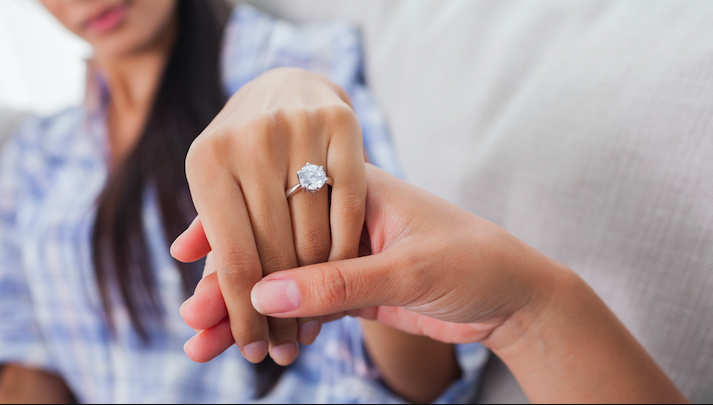 “Rachel, come in here for a second,” he shouted from the kitchen, pulling me out of my stalking trance. I was 32 weeks in on a girl who had once made out with my high school boyfriend, and I was finally getting to the good stuff.

I inwardly groaned, expected him to ask me what was for dinner (I didn’t know) or if had taken our dog to the dog park (I never do).

“What is it?” I delayed, closing my laptop on the girl’s face I hate-stalk daily and trudging slowly toward the sound of his voice.

“I just wanted to ask you something,” he said, coming around the corner and meeting me in the hallway. He had a beaming smile on his face as we almost bumped into each other. Pulling my left hand into his, he took a deep breath.

“I wanted to ask you something,” he continued, lowering himself onto one knee, “important.”

So, how did I get here? How did I get to the point that the guy I had been madly in love with for most of my college career was kneeling on the dirty floor of our apartment (I promise, I’ll mop soon), perched on one knee, gazing up at me in adoration?

Easy. I have the world’s most beautiful vagina. I’m serious. This thing is good. Looking at it, you don’t think “vagina.” You think of words like “home,” “happiness,” and “together forever.”

Kidding, guys. I’m kidding. No, unfortunately, my vagina just looks like every other vagina (I think?). In reality, we just got along well. We laughed at each other’s jokes and we’ve been there for each other during hard times. We graduated college together, moved in together, moved across the country together, got a dog together — the whole thing. We had done all of the steps. The only one missing? The ring.

Now, some people might think, “you’ve been together four years and you still don’t have a ring?” And to that, I say “fuck off.” I’m not spending my days breathing down his neck begging for a proposal (yes, I am), but the topic of marriage has come up plenty of times (like when I’m drunk and emotional and one of my friends gets engaged) and at this point, it’s as assumed as it could be for someone who still has a naked finger.

And after being asked on more than one occasion what my dream ring would look like (when we’re both drunk), I figured the idea was at least sort of on his radar.

Still, you can imagine my surprise when he burst into our apartment after work and got down on one knee. I stared at him and started to laugh, appreciating the joke of the situation. I hadn’t washed my hair in three days (okay, four), I was wearing a dirty XXXL t-shirt that I literally use as a napkin when I eat, and I couldn’t tell you the last time I had put on makeup. I wasn’t proposal-ready, but it was fine because I knew this wasn’t *my* proposal.

And then, well, and then he started talking.

“We’ve been together for such a long time,” he started, rubbing his thumb across my fingers, “and I love all of the memories we’ve created together.” I giggled. What a loser, I thought as I tried to pull my hand away. I was shocked that he was taking the joke so far, but we *had* just watched the episode of The Office where Jim pretends like he’s going to propose to Pam during the fun run. That must be it, I decided, smirking back at him in my best, “I know what you’re up to, pretend-Jim” face. As I tried to pull away again, he gripped my hand tighter, planting me in place.

“You mean everything to me,” he smiled up at me, his deep blue eyes dazzling in our shitty fluorescent lighting, “and as you know, I can’t imagine my life without you.”

My pulse started racing as his words reverberated inside my skull. Can’t imagine my life without you? What was he talking about? For the first time since he started his speech, I *really* looked at him. He was in a nice button down shirt and dress pants. His face was freshly shaven, his hair was parted to the side, just how I liked it. As I took in his better-than-usual-attire, I noticed, for the first time, that his left hand was behind his back. His left had was holding something behind his back.

I forgot that I was standing in our filthy hallway that I had promised to mop three weeks ago. I forgot that I hadn’t shaved in two weeks or that my hair was creating so much oil I could bottle it and sell it. I forgot about the t-shirt, the lack of makeup, the fact that my nails weren’t done or that I looked like a German boy. He looked so handsome, down on his knees for a change (hi-oh), and for the first time since he called me over, I wondered, could this be it?

“So, Rachel,” he concluded, taking a deep breath and squeezing my hand, “will you marry me?”

The blood drained from my face as I tried to grasp the words he just said. Marry? Did he say marry? MARRY? He couldn’t have. Is this really happening? This is happening? How is this happening? Did he just propose?

“Wait,” I squeaked out finally, staring at his handsome face, a face I know better than my own. I willed my heart to slow down as I tried to make sense of what was going on. “What did you just say?”

And then, slowly and deliberately, and brought his left hand around and slid a ring around my finger. I attempted to focus on what was happening, but my mind was swimming. Did he just ask me to marry him? I glanced at my no-longer-naked ring finger, frantically trying to digest the moment. The stone was bigger, way bigger than I had imagined. Way bigger than I wanted, really. And the color wasn’t exactly the colorless diamond I had pinned. It actually had more of a blue tint to it. The weight of it caused my hand to slip out of his, and I stared at what he had placed on my finger with shock. I couldn’t believe it — it was just too much.

Finally, after grasping for the right words, the right phrase, I found my answer.

I looked from his face to the giant blue Ring Pop resting on my hand. A Ring Pop. A Ring Pop was sitting where my 1-1.5 carat solitaire ring should have been sitting. A Ring Pop was the grand finale to his beautiful speech. To the four beautiful years we’d spent together.

I chucked the ring (pop) at his head and ran into the bedroom. Who does that? I thought, slamming the door and attempting to stop hyperventilating. Who fake proposes but says the four main words? His voice floated under the door as he apologized, but the laughter that followed only made the anger shoot through my veins harder. Faster. Who says “will you marry me” with a fucking Ring Pop?

It’s been exactly 38 hours since he fake proposed to me, and by now, he thinks I forgot. Or that I’m going to let it go. And that’s fine. I’m happy to let him think that. I want him to think that. An hour or so after the “proposal,” I came out of the room to find dinner made, candles lit, and wine poured. Soft music floating in the air and mixed with the decadent scent of buttery steak and fresh basil.

And then he fake proposed to me again.

Just kidding. Then, he sincerely apologized and we laughed about it together. We discussed our feelings and our hopes and blah, blah, blah. It doesn’t matter. Because the me that left the bedroom isn’t the same me. The me he fake proposed to isn’t the me he’s with anymore. I’ve changed. I’ve turned. I’m different now. Much like the female lead in any thriller, this is only the beginning. I have been scorned, and I won’t forget. I’ll *never* forget.

Things are about to get a lot less The Notebook and a lot more Gone Girl. What can I say? I don’t even like blue Ring Pops..