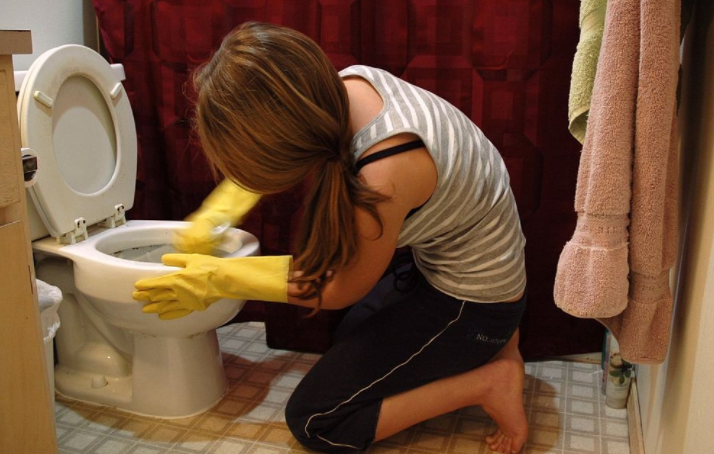 “I need you to come home,” I typed with shaky fingers, as I pulled myself across the drenched bathroom floor.

“Is everything okay?” he uncharacteristically texted back immediately.

Is everything okay? I stared down at my filthy body, aching leg, and the sea of sewage on the tile before me. The tears welled up as I wrote the words no girl wants to send to her live-in boyfriend.

Let me back up a bit. This past year on my birthday, I had it all planned out. I was going to go to the motherfucking Melting Pot on Friday, go out to a piano bar on Saturday, and Sunday would involve going to the farmer’s market, the girliest bakery in the world, and chugging a shitton of champagne. Just your basic birthday weekend celebration for a basic person. It would get decent likes on Instagram and make me forget that I’m getting closer and closer to actually having wrinkles on my face, which is really all that matters.

Anyway, things were going well. I racked up my boyfriend’s credit card bill on Friday and was the perfect amount of hungover on Saturday. I laid in bed while he got bagels and I moped around for a while before tossing on some false eyelashes and the most obnoxious fur coat in the world (fake fur, guys. Hold your red paint. Like I could afford real fur over the $30 monstrosity I got off Amazon Prime).

Needless to say, Saturday didn’t go as planned. Neither did the next three months of my life, for that matter. When the men at the piano bar called my name to the stage, I had to descent a great flight of stairs. And instead of just walking down like a normal human, I chose that moment to trip and break my ankle in three places. The paramedics were called. I was carried out on a stretcher. I had emergency surgery to save my foot (okay, I don’t know if I would have actually lost my foot, but it sounds nice and dramatic).

The point is, I broke my ankle (like, brooooke it), I was going to be unable to walk for at least twelve weeks, and the amount of morphine and pain pills that were being pumped into my system were enough to knock out a small horse. Or me, who coincidentally weighs the same amount as a small horse.

The thing they don’t tell you about pain meds (or maybe they do, but I was too drugged up on said pain meds to remember) is that they stop you up. They dehydrate you to the point that any shit in your body turns to a literal brick that has no hope of escaping. For days, I didn’t even think about it. Six days, to be exact. For six days, it didn’t occur to me that I hadn’t gone numero dos. The real kicker is that despite the fact that I’ve been with my boyfriend for 3.5 years and lived with him for two of those years, I’ve never openly announced that I, Rachel, use the bathroom for *that* reason. Call me old-fashioned, but I don’t want my man to know I poop. No need to tell me to talk to a therapist. I already know it’s fucked up.

That said, I hadn’t gone in six days, and I hadn’t even had the chance since he’d been at my bedside since I fell down the stairs. So on the sixth morning when he regretfully said he had to go to work, I took that chance to make my great poop escape. He left, and I hobbled to the bathroom on my crutches, where 45 minutes later after tears and a bleeding (yes, bleeding) asshole, I gave birth to what must have been an actual, baby-sized monster.

And two minutes later it became very clear to me that six days worth of shit was not going to make it down the toilet. I watched in horror as the brown water teetered over the edge of the bowl, and then spilled out, like a scene out of The Shining.

In a normal state, I would have just cleaned everything up, grabbed my passport, gotten a ticket to Europe, and started a new life. But thanks to my broken ankle and fresh stitches, I couldn’t balance on one leg long enough to get a mop, let alone scrub the crevices of the bathroom that were now soaked in my shit. Or plan a cross-country move complete with a fake identity, as I would have preferred.

So, I did what any self-respecting woman who is still creating the illusion that girls don’t poop to her significant other would do. I Army dragged myself into the kitchen where I got some paper towels and some glass cleaner (seriously? How was that all we had), and I laid on the bathroom floor, in my own excrement, trying to scrub it all up.

Two hours and an absurd amount of tears and self-pity later, it wasn’t much cleaner, and I knew it was time to call for help. I debated contacting a friend, but something about making a person who enjoys hanging out with me clean up my shit was too much. I knew who I needed to call.

My boyfriend. Not Ghostbusters, guys. Come on. They deal with dead people, not dead egos.

After sending him the initial “my shit is everywhere” text, I called him in tears and told him the story. It was the moment they cut out in every romcom. The girl, at her lowest point, is forced to tell the man she loves that not only does she poop, but it’s everywhere, and he needs to leave work to come clean it up. The classical music swelled and after the slightest moment of hesitation, he said he was on his way.

JK. He went into the bathroom and scrubbed it for a good thirty minutes before throwing out the mop and sending me a Venmo request for the cleaning supplies he purchased. Still, it just goes to show that when your life goes to shit, at least the person you love didn’t have to come home and literally scrub yours up. Perspective, ladies..