My Life in Charge of Standards 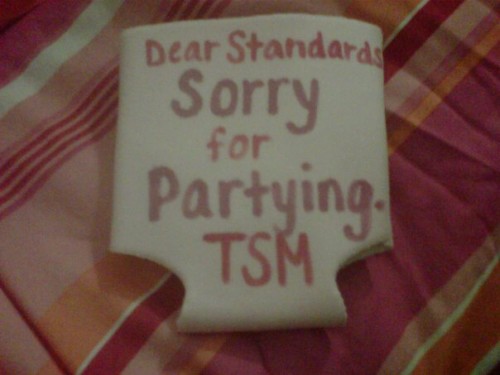 Standards….everybody hates it, but I happen to love it. Because I’m in charge. That’s right…I am my chapter’s VP of standards.

Why did I choose to run for this hated and feared position? For several reasons. It might have to do with the fact that all the heads of standards before me were the uglies that just wanted revenge on us for making them stay “behind the curtain” during recruitment. It might be because I got called to standards freshman year for “use of illicit drugs” (when really, I just took a drag of a random frat boy’s cigarette), and I wanted MY revenge. But mostly, it’s because I genuinely care about my sorority. I care about our reputation. I care about the safety and well-being of my sisters. And I want to see things run smoothly.

Being VP of standards of one of the drunkest sororities on campus (scratch that…THE drunkest sorority on campus) is no easy task. Especially when you’re a bit of a boozehound yourself. I’m drunk, and pretty, and I frequently MO with the opposite sex, and sometimes make the sort of mistakes that land my sisters in my office on alternating Wednesday nights. But all things considered, I think this works in my favor and I’m pretty sure it’s why I got elected almost unanimously. My girls relate to me and feel like they can be honest with me. I’m their friend rather than some psycho tyrant upperclassmen. I’ve been there. I get it. IIIIIIIIIIIII’m every woman! (RIP Whitney.)

As VP of Standards, the first and most important order of business is to assemble an awesome committee. Being the brains of the operation is hard enough without a solid support system that will have your back. The more the better…when tricky situations arise, it’s helpful to have a bunch of brains to bounce ideas off of. Choose a group that’s somewhat varied, like a good mix of the morally uptight and the laid-back (don’t let the girl who is completely morally bankrupt onto committee. That’s just hypocritical). Most importantly though, you need girls who will SHOW UP! None of those creatures who actually bother attending their 3-hour night class or who pull the disappearing act when they don’t feel like sitting through a meeting. Your phone was not dead and you DID get my 17 reminder e-mails, bitch. A good example would be your big, your little, one or two from your close circle, the smart girl, the social one who knows everything, and some level-headed girls who are outside of your immediate circle, but that you trust. Not any of your social chairs because you WILL have to bring them in at some point. And NOT risk chair. She’s a freak.

Secondly, you need to have a plan to make sure the meetings are efficient and as conflict-free as possible. Everything is confidential, aside from the inevitable post-meeting gossip calls to each members big, little, and grand-big (which, if you’re smart, you’ve already accounted for AND done damage control). Every chapter has different rules on how the meetings should go, but there are a few basics. NEVER discuss a member’s punishment in front of her. NEVER intimidate, NEVER take advantage of a new girl’s naivety, and most importantly, hold your ground and never let them see you sweat. Rules are rules, you’re in charge, and they have to do what you say. You might be besties, and you might even be going to the bar together later, but you still have to make your demands loud and clear. It can make you feel like a huge bitch, which is why it helps to already be one. Another thing that helps? Wine.

As standards chair, I see girls for a number of reasons. Mostly dues, in which case the meeting is boring and pointless because billing emails go straight to her Daddy and girls have no idea why payments aren’t in. Sometimes there are cases of catty drama between sisters or a sister and someone in a different chapter that we have to get under control. Sometimes a member is conducting herself, on campus or via social media, in a way that is embarrassing or disgraceful to the chapter and we have to give her a swift kick in the ass. Often, a member won’t fulfill her responsibilities for speakers, philanthropies, community service, as a sober sister. The worst is when a chairperson or member of E-board is royally abusing her power and pissing people off left and right. The meetings I look forward to, however, occur in the weeks following Greek Week, crush parties and fraternity formals, and I’ll be keeping you nosy skanks updated on the shenanigans my sisters get themselves into this semester.

Until next time. Stay classy; I’ll be watching.