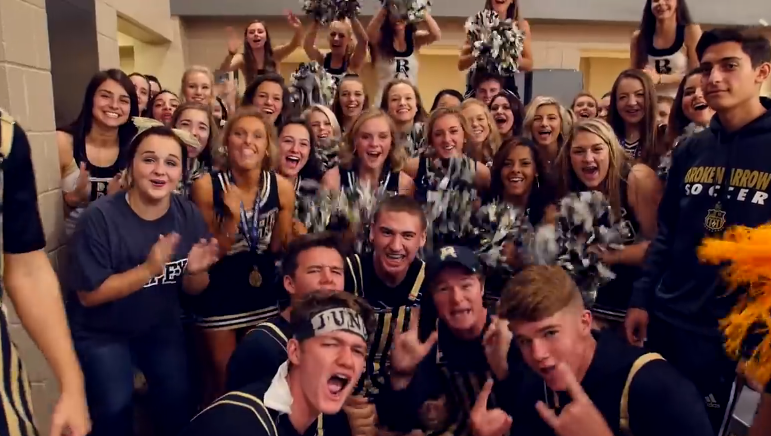 Sometime over the past few years, everything I knew about high school changed. Cell phones are allowed in more classrooms, 16-year-old kids look like they’re twenty-seven, and schools everywhere started doing lip dubs.

If you’re unaware as to what a lip dub is (where have you been?), it’s basically a lip-sync music video shot without taking any breaks. What this usually turns into, is every punk kid trying to outdo the next for their 15 seconds (that’ll live on YouTube forever) of lip dub fame. And a whole lot of tripping. It’s a hot mess.

Then there’s the flawless student body at Broken Arrow High School in Broken Arrow, Oklahoma. The 3,600 students and faculty came together to make a lip dub of all lip dubs. Although they kiiind of cheated by filming it in three weeks instead of one shot, the extra time was worth it. There’s no tripping and no one trying to steal the spotlight. Just 2,600 students who absolutely crush it.

And of course, the faculty really giving the whip and nae-nae their all. Maybe too much all, actually.

Spoiler: don’t watch if you’re not emotionally prepared to feel transported back to the halls of your alma mater.

Is it wrong to think some of those guys are cute? Probably..