So, Here’s What *Actually* Happens After You Go Through Recruitment 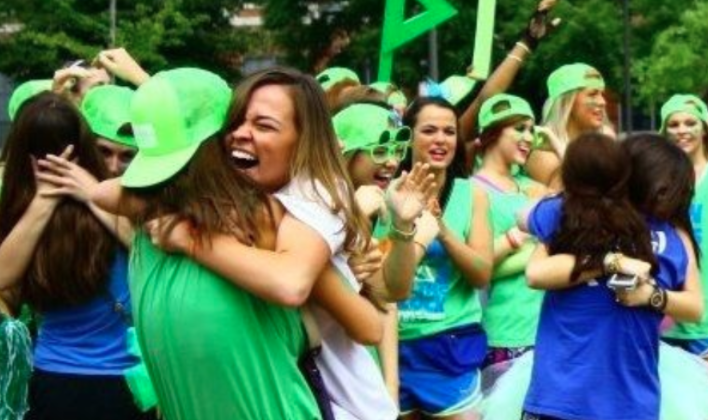 It was hot and my feet ached as I teetered on my six-inch heels to the final house of the day. The sun was starting to set along Greek row, and I was already feeling emotionally drained as I plopped down on one of the plastic chairs nestled in the share of the large, temporary white tent.

“How are you feeling, Rachel?” My Rho Gamma asked as she perched on the seat next to me, looking significantly less frazzled and sweaty than I did.

“It’s alright,” I sighed, reaching for my water bottle and putting in back down in disgust after feeling how warm it was. “It’s just been a really long day.”

Princess Jasmine, as she went by since all Rho Gammas’ identities remain a secret for the duration of recruitment, leaned forward and put a hand on my shoulder. “I totally know what you mean. Pref night is a lot. And this day hasn’t been easy for you.”

It was the final day of recruitment, Preference night, and at this point, I felt pretty over the whole experience. Up until then, I had been making recruitment my bitch. I had charmed my way into getting invites from the top chapters each and every day. At this point, I was already mentally calling them sisters and had visions of walking into one of those top tier chapters with their cool girl reputations and calling one of those devastatingly ornate mansions “home.” I wanted the pretty friends, the perfect parties, and the “best” frat guys to fall at my newly-single feet. So, for the entire summer, I had done everything in my power to make that happen. I whitened my teeth to the point that they became sensitive to anything that wasn’t a room temperature mush. My skin turned a rich caramel color as I spent every day at the beach, liberally applying tanning oil and snacking on pieces of celery. I ran three miles every day, which was three more miles than I had ever run.

And when I showed up to recruitment in the fall, I almost looked the part. And for a while, I had them fooled. As I walked into the enormous houses each and every day and talked to the girls who looked like the popular people from my high school, I convinced myself that it felt right. That I was fitting in. They were easy enough to chat to, I thought, as I triple checked that my hair was curled the way Cosmo had told me to in the mirror. If I just pretended to like what they like, they wouldn’t be able to tell that I was actually bubbling with self-doubt, right? That I was so uncomfortable in the bodycon dress and the stilettos that cost three week’s pay from my summer job. Underneath their makeup and tans and abs I would never have no matter how many miles I ran a day, we had to be the same, right?

It seemed like we were, until Preference night, when I got cut by all four of my top houses. All four of the top tier houses. And at the time? It was pretty fucking devastating. I cried. I complained. I called my mom and cried and complained to her. But eventually I had to make a choice — check out the other houses that wanted me, or drop out of recruitment and go through college without Greek life, something I had wanted to be a part of forever.

That’s where these recruitment love stories usually end. That’s where mine usually ends. But as a postgrad who did the whole recruitment thing years ago, I want to let you in on something even bigger. Even better. What happens after recruitment, after initiation, after the socials and formals and big little wars. After becoming a big, gbig, and a ggig. After the sentimental senior year and getting spoiled like a new baby again, after having farewells, getting your stole, and marching across that stage, an alumna of your university and your chapter.

Because when you’re in college, it’s easy. You go to the house and there are sisters to talk to. You go on socials and there are boys to talk to. You go to philanthropy events and there’s a whole Greek community to talk to. With built-in events, most of which include food and/or alcohol, it’s almost too easy to form bonds with a variety of people. You see your friends everywhere, and with schedules like having class on Tues-Thursday from 9am-3pm, it’s pretty hard not to find people to love.

But that’s not actually where the magic of being Greek is seen. It’s not at your Lip Sync events or Greek Games. It’s not at semi-formals or date functions or sisterhood retreats. It’s not even in you chapter room on a lazy Sunday, when treats are being passed around, and friends are passing notes, and someone is braiding your hair, and everyone is laughing about something that happened at meal plan last week. As much love and magic and beauty as there is in all of those moments, that’s not what it’s all about. Greek life is about what comes after. What comes later.

Because what comes after all of that, is where you can see the true reason for being in one of these organizations.

It’s the fact that after graduation, you moved away, and yet, you still Snapchat your big daily. It’s the bond you have with your little, who ended up dropping the chapter, but managed to remain closer than ever. It’s standing by you best friend’s side on her wedding day, a girl who was in the chapter you dreamed of being in. The chapter that dropped you. It’s calling your biological sister, who ended up choosing a different chapter on Preference night. A chapter that wasn’t yours. It’s going to your pan-little’s bachelorette party, a girl who was in a “rival” chapter. It’s watching your boyfriend stand by his fraternity president’s side on his wedding day, marrying a girl from a different school.

Sorority life, Greek life, isn’t just about the three or four years you have in your chapter. Sure, all of us old graduates would give anything to go back in time for Thursday night socials and Friday meal plans that included chicken fingers and three types of French fries (plus the metabolism that allowed us to eat that every week). But the funny thing is, as sad as it is to leave your house, your school, and your sisters, you realize as time goes on that the cliché really does ring true. Because as you visit sisters in their new homes, or act as bridesmaids in weddings for girls from different chapters, you realize that being in a sorority doesn’t end when you walk across that stage your senior year. Being Greek isn’t over the night of your final chapter. The friendships you made and the bonds you created are what it’s truly about. Because as much as we all thought we were just saying it for good PR during recruitment, it really isn’t just four years. And as wedding season comes around and you long for the days when all you had to pay for was dues, it’ll hit you that it really is for life..