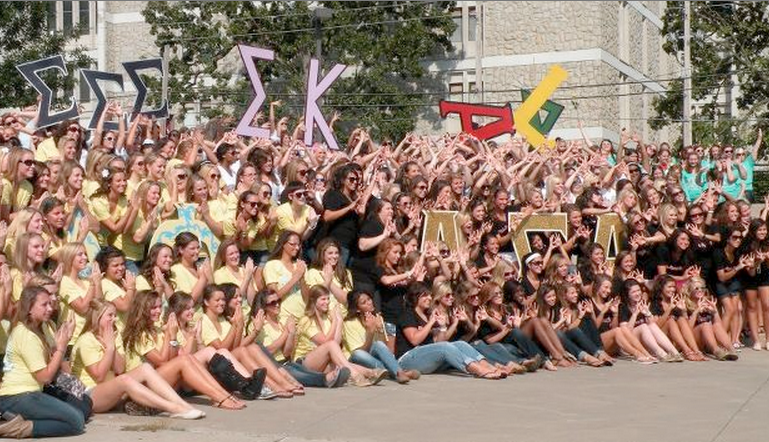 I’m the girl guys dream about.

Besides being conventionally attractive, I boast another feature that can’t be seen overtly but is one that men fawn over whenever I happen to mention it aloud: I am a sorority girl. Sorority girls are sluts. That’s the ideology that society, the media, and popular culture continues to perpetuate about us, among a series of other demeaning stigmas which oftentimes convey us as anti-feminist bimbos, avid partiers and hazers, as well as conformists who “pay for their friends.”

The most tragic aspect of this cultural falsification is that it’s working. Based on the ongoing hate talk, bad publicity, and media appropriations that continuously targets us Panhellenic sisters, it is fair to argue that these feelings must, in fact, be stemming from some type of valid source. If women in sororities didn’t consistently present themselves in a certain way which might merit these prevailing negative attitudes then this external banter and these generalizations surrounding us wouldn’t exist, right?

What if I told you that we, ourselves as sorority women, are even made to think this way. We continue to reciprocate a cycle of presenting ourselves as highly attractive, fun-loving, bubbly young women who love to have a good time, not because those traits exist inherently within each of our individual personalities, (although they genuinely do for some of us) but because we ourselves, have no alternative but to try and mimic these very notions and forged perceptions which ultimately work to tear us down.

Since this identity was the only one that I felt I had left, I did everything within my power to maintain this role that society had set forth for me. Even when it meant sacrificing my own health due to a serious eating disorder which I had developed at the time.

I started going to more parties, stopped eating, and spent more time drinking, smoking and hooking up with guys than I had done in class or on my school work. This rendered me incapable of separating my true sense of self from my culturally constructed persona, thus condemning myself to internalizing these prevalent notions of failure and shame. Even more powerful than the voices in my own head were the ones that were emanating from society’s onlookers.

Sorority girls are sluts, they said.

That means I should go home with that guy tonight even if I know I don’t want to. It means I should make out with as many fraternity boys in one night as possible. It means that I should talk openly about my sex life and share private details with friends that I otherwise would not.

Sorority girls are partiers, they said.

That means that I should stay out until 3am even though the thought of me having to be at work at 8am is lingering in the back of my mind. It means I should keep chugging that jungle juice, keep taking shots, and keep mindlessly dancing along until I am physically unable to stand up and someone must offer to take me home.

Sorority girls are sexy, they said.

Sorority girls are hazers, they said.

It means that I should not even acknowledge these new members in our chapter as individuals whom I am encouraged to interact with. It means that anyone who is not wearing my letters is expected to earn my respect. It means that my affiliation and dedication to my selective society of membership deems me as better than the nerdy girl who is sitting next to me in my economics class, despite the sheer fact that I, myself, am the one who’s falling apart at the seams.

In spite of my own personal identity complexities, I am certain that I am not the only undergraduate woman out there who feels this ever-present notion of shame surrounding their status as a sorority woman. In fact, I accept that there are even thousands of other women who happen to share the same or similar feelings in regards to their own conflicting senses of identity as I do.

There are so many of us who often internalize the conglomerate of lies that have been fed to us about who we are and what it is exactly that we are supposed to be as young women navigating this trail-run of adulthood. It is my suspicion that there are far too many sorority women who bear the shame of this stereotyping but refuse to talk about it openly, either because they are too afraid to or for the sheer fact that admitting our faults would just ignite further indoctrinations against us.

No one has been brave enough to admit that our culture as sorority women is problematic and believe me when I say that I am the first person to implore that this sentiment is not nearly the fault of us sorority members, and us alone. However, when we as a subculture collectively decide that we are going to feed upon these lies that are spewed out to us by outsiders we only become a part of the problem instead of serving as the flame that could ultimately possess the potential ignite a solution.

We must stop buying into this bullshit and hypocrisy that demeans and objectifies us. We must become a part of the solution, and the only way to do that is to stop acting so much like the sorority girls that the world wants us to be and start acting more like our true selves..

Kristen Simonelli is a Monmouth University Student, Writer, Advocate, and Sorority Woman. As a frequently featured columnist on various contemporary online media platforms, Kristen's philosophy of raising awareness for neglected social issues is personified through her written work with the intention of cultivating a voice for individuals who are unable to speak up for themselves. Feedback and professional inquiries for Kristen may be fowarded to her directly via email at [email protected]