That Time I Used Saran Wrap Instead Of A Condom 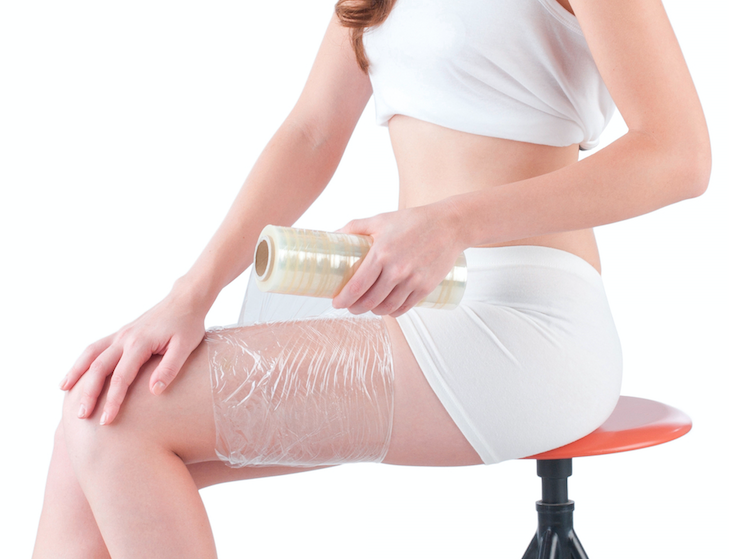 “I don’t have a condom,” he murmured dejectedly as he gazed down at my naked body.

“Wait, are you serious?” I asked, my vagina speaking louder than my logic. “Is there anything else we can use?” I watched as a whole string of emotions crossed his face. Surprise, concern, excitement, doubt, and finally, determination. He eagerly pushed himself up, grabbed his boxers, and peeked out of the door.

“No one’s out there,” he proclaimed in a stage whisper that wasn’t any quieter than his normal speaking voice.

“Okay. So go?” I said, already somewhat over this whole situation.

As I hear his steps echo out into the other room, I lay back on the white, linen bed. I had been dating Adam for a year, and considering that he was my first boyfriend, things were just now starting to heat up. I had lost my virginity to him a few weeks ago, and other than the few times we had knocked out a quickie after school, we hadn’t had sex that much. So I had a plan. The most cliché plan ever: a sleepover. We’d go to his older sister’s house, spend the night, and have sex for real.

The only problem was that I didn’t relay my plan to him. I thought we were on the same page, and to be honest, I wanted it to low key be a surprise. So when we arrived at his sister’s house for the evening, I was ready for a romantic evening and he was not. After making small talk over dinner with the woman who shared his genetics, watching some bullshit show on the TV, and pretending to be tired, we headed off to bed. That’s when everything started going to shit.

Actually no. It was fine for a little bit longer. As he inched me back onto the bed, with a thirsty look in his eyes, I felt my pelvis constrict. My knees caught the back of the mattress and I fell onto the comforter with a giggle.

“Keep it down baby,” he growled.

Yeah. At this point in my life I was still cool with guys calling me “baby.” Cute, right? I felt my heart stutter in my chest as I realized just how bad we were being. Pre-marital sex? In his sister’s house? While my mom thought I was at my friend’s house? My own boss ass bitchiness was turning me on more than him. Wait. There goes his shirt. I watch as it falls slowly to the floor, and peel my eyes up to his body. And those abs. I take that back. He was turning me on more.

I leaned my head back on the bed, and he slid his body onto mine. I could feel the heat radiating off of his skin as I squirmed in anticipation. He sat me up and whipped my (most likely Hollister) tank over my face. He impressively unclasped my bra on his second try and gently pushed me back down. His lips landed on my chest, and my breath hitched as he nibbled on my nipple. His mouth moved up to my neck, nipping here and there. I could feel the blood pounding in my veins as his warm breath tickled my ear. He reached for the back of my neck as he pulled my awaiting lips onto his. As he bit my lip, just a little bit too hard, I felt a jolt run to my southern regions and my cheeks flush in excitement.

Fuuuuck. I wanted him. I moved my hips in an effort to make him realize that I wanted his hands and I wanted them up my vagina. Now. Unfortunately, he was too busy pawing at my boobs to get the nonsubtle hint. Was he squeezing my chest? Was he slapping? Was he pulling on my boobs in a way that almost brought tears to my eyes? Maybe! Ughh come on. I know grabbing my tit is fun but just move it down a little bit…no not my stomach. What the — oh shit there it is. A moan escaped my lips as his hand slipped into my 5 for $26 VS “panties.” His skilled fingers circled my clit as he kissed my jaw line. He slowly eased his pointer inside of me. I would have been embarrassed about how wet I was, if I wasn’t so impressed with myself.

“I want you inside of me,” I purred into his ear.

And that’s right about where I left you. His palm deep inside of my vagina, me begging for the dick, him not being prepared. Before I sent him off into his sister’s house on the hunt for a condom, I asked why, the hell, he didn’t have one. His answer? “I thought we were just having a sleepover!”

As I was sitting there waiting for him to return from his mission, an idea popped into my mind. A memory, almost. Back in the day when I was obsessed with the musical Grease (because yes, we all had our first sexual fantasies thanks to Danny Zuko) I remembered the scene where John Travolta rubs Saran Wrap on his dick.

I had asked my mom what that was all about, and for some reason she didn’t lie. She fessed up and admitted that back in the olden days if kids didn’t have a condom, they’d use plastic wrap. The joke’s on her, because when she told chubby, awkward me that at the age of ten, she never thought I would use that information when I was seventeen and hot.

So when Adam came back in the room empty handed (shocker. He didn’t find a condom just laying around his sister’s house), I told him the plan. He was going to go into the kitchen, find some plastic wrap, and wrap that dick up.

The sight that I was greeted with when he returned yet again is one that I will never forget. The tanned, toned guy I was in love with was completely naked. And attached to his pelvis? A massive boner that looked like it was being strangled by white-ish, clear tape.

“Does it hurt?” I asked, gazing down at his painful looking erection.

“No. Not really. It just feels…tight?” He grimaced as he moved toward the bed.

“Are you sure you want to do this?” I question, as he took a deep breath and slowly eased onto the comforter, wincing in discomfort.

“Yes! Yes it’s fine. Let me just lean back or something.” I watched as he inched up to the headboard and let out a deep sign when he finally sat back.

Not exactly the romantic start I had hoped for. Considering that his dick looked like a left over sausage wrapped up for storage, I wasn’t sure how to proceed. That wetness I was bragging out? That was long gone. And considering that this guy couldn’t move without the plastic ripping at his pubes or causing chafing or whatever the hell the problem is, my dream of him going down on me was a bust. All I wanted was a little tongue action and some Barry White, but it looks like I was getting neither. And sucking his penis now would do virtually nothing. I doubt that he’d be able to feel anything, plus, I wasn’t feeling too giving anymore. So I did what any slutty, self-respecting seventeen-year-old would do.

I started spitting on his dick.

I knew that guys liked that (thanks Google), but I didn’t exactly know how to do it properly. Did I need to get phlegm? Should I hover above and let it drip out, or sort of shoot it from my mouth from a side angle?

I decided to do a little of each as he watched me with a mixture of horror and amazement.

“What are you doing, babe?” He asked, after I hocked my second loogie onto his sad looking penis.

“Trying to get you wet…?” I muttered, wondering if I had gone to far.

“I think we’re good, come up here,” he responded, making me realize that I had, in fact, gone too far.

He pulled me into his lap, and moved his leftover sausage out of the way. He started to kiss me, and I reached down to grab him. Oh. Yeah. It felt like a plastic toy. Hot. At this point, I had gotten in too deep. All I wanted was a dreamy night with my not-even-legal high school boyfriend but no. Life decided to fuck me in a way his wrapped up penis never could. I knew this wasn’t going to be good for either of us. But yet, as I eased myself onto his plaster mold of a penis, I was shocked to see his eyes roll back in his head. How was he even feeling this?

I started rocking back and forth, distracted by the squishy, scratchy sounds of plastic moving around.

“Lean back baby. Lean back,” he gurgled through his ecstasy.

Lean back? We hadn’t quite gotten to that part of our relationship yet. I was still just newly devirginized, and I sortttt of thought we’d be *~mAkInG lOvE~*. Leaning back wile doing him cowgirl in his sister’s guest bedroom while he wears Saran Wrap on his dick was not what I would call making love. And with something that felt like an over-sized Barbie arm wedged up my vag, I wasn’t the most enthusiastic. But considering I didn’t want the total night to be a bust (and I wanted him to bust, if you know what I mean), I leaned back.

We were done. With a contorted face, a guttural moan from him, and a few painful him thrusts, it was over.

I had had sex with a Saran Wrapped penis. And it was as bad as could be expected.

After that he rushed off to the bathroom to unwrap his dick, only to tell me that semen spilled all over his hands while doing it. Sweet. The next few weeks were spent receiving lectures from my friends, praying that my period would come, and hoping that I managed to beat teenage pregnancy. And while I’m not advising using cooking wear instead of a condom the next time you get weird, I have to say: that shit worked. I managed to avoid having a baby, and learned why you should always be prepared to fuck, because sometimes guys just don’t think ahead. Maybe Danny Zuko wasn’t trying to teach me out how to have somewhat safe, 1950s style sex, but that’s what he did.

And thanks to him, I’ll never fuck with Saran Wrap again. It’s condom-less for good. Jk. Sort of. Ah to be young..