The 4 Hottest Things In The New “Fifty Shades Freed” Trailer 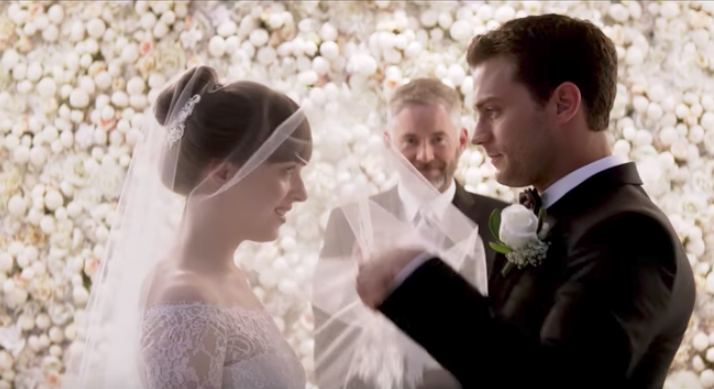 If there’s one thing we all love (besides hate stalking our exes and consuming our weight in cheese) it’s sex. Talking about sex. Thinking about sex. Turning people down who want to have sex with us — it’s hot, it’s steamy, and it’s a fucking power trip. And, since we all love sex and power, we’re naturally all obsessed (even if it’s secretly) with the “Fifty Shades” franchise. Say what you will, but that shit is hot.

Now, as for the series, things have already moved along nicely. Christian and Ana have had the classic breakup/makeup thing, the “his ex is still in love with him” thing, and “the old ass lady who took his virginity awkwardly outed him in front of his mom” thing. Oh yeah, and that time Ana’s ex-boss tried to kill Christian. Same ole, same ole. So, naturally, the only next step for them? Fucking matrimony. Check out the just-released trailer below for a peek in the pants of the final installment.

A lottttt is happening here. Let’s break it down to the four best aspects, shall we?

When you’re in a relationship where the end goal is wedding bells, there’s one nickname and one nickname only that makes all of our panties wet (ugh, sorry): wife. If any moment in the series made you more hot and bothered than when they called each other by their new legal prefixes, then you’re lying.

I’m sorry, this girl who graduated college like, half a second ago is now the head fictional editor of an impressive ass publishing house? First, I’m calling bullshit. Second, I’m calling “didn’t your husband buy the company? I’d be hella jealous of this bitch.” And third? As much as I’m a hater, that’s absolutely amazing. If getting the hottest guy in the world to commit is great, getting your dream job and proving to everyone that you aren’t just a vapid, gold-digging harlot is even better.

Sure, it’s a little annoying that he bought a house without her input. But when it’s a mansion (and when he has enough disposable income that he can buy thirty more houses she loves), you can’t really complain too much. Besides, there’a 0% chance that she’s not going to be allowed to decorate it however the fuck she wants. Which is, truly, the dream in this Pinterest-obsessed society.

4. Putting A Thirsty Bitch In Her Place

How many times have we seen some random ass girl flirting with our mans? How many times have we put those soul-sucking demons in their places? If there’s anything in this entire series that makes me want to stand up and shout “you fucking go, bitch” while fanning myself off, it’s when she says, “you can call me Mrs. Grey.” Killed. It.