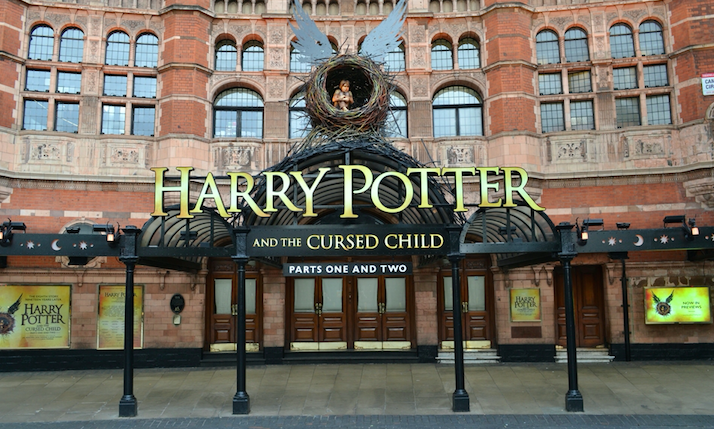 Nine years (and 11ish days but who’s counting) ago the final installment of The “Harry Potter” series was released. If you were a kid, or one of those virgin-types like me, you anxiously waited in line at your local bookstore for the seventh book. Maybe you dressed up in costume. Maybe you got sorted into your Hogwarts house. Maybe you went home and stayed up for two days to finish it. You know, normal things that people with friends and social lives did.

Anyway, back then we thought the story was over. I mean, all over the book it insisted that the book was over. The freaking dedication was like, if you stuck with Harry until the end, this is for you.

And we did. We stuck with him. And it was sad and painful because we grew up with those freaking stories. But then, like all good things, it came to an end. We accepted it. But, of course, as always, JK Rowling threw a twist at us. She decided to throw us for a total loop and release an 8th installment of the story. Nine freaking years later. It’s actually a play, but this Saturday, July 31 at midnight the script is being released in book form.

So you know, the 8th “Harry Potter” book that we were told would never happen is happening. Naturally, this has sent everyone into a freaking frenzy (unless you spend your free time doing things that don’t involve broomsticks and pumpkin juice). And so, like the good ole days, bookstores around the nation are having midnight release parties. Like you had better Saturday night plans.

This Sat at 8, nationwide: count down to #CursedChild's midnight release at your local B&N! https://t.co/mOlsR6CbDN pic.twitter.com/LBlsoOdT3r

So in preparation for the next chapter of the journey, here are a few little tidbits about where we last left Harry Potter in the epilogue of “Harry Potter and the Deathly Hallows.” Is my nerd showing yet?

• Harry dies. Sort of.
• But don’t worry, he comes back and kill Voldemort and saves the world so like, it’s all good.
• Harry and Ginny are married, thank God. Talk about sexual tension.
• And they have three children, James Sirius (aw), Albus Severus (sob), and Lily Luna (ugh).
• James, the oldest, is already at Hogwarts and is in, you guess it, Gryffindor.
• Albus, however, who is entering his first year is scared that he’ll be sorted into Slytherin.
• Naturally our main man HP has the best words of wisdom, saying that one of the headmaster Albus was named after (Severus) was Slytherin and a total BAMF.
• And that there’s nothing *wrong* with Slytherin.
• And that he could tell the sorting hat how he felt if it was that important to him (#tbt to the first book).
• Ron and Hermione and married! Yay! YAY!
• And they have two kids, Rose (who is just starting at Hogwarts) and Hugo
• Neville freaking Longbottom is now the Herbology professor at Hogwarts.
• Draco Malfoy is married (shocking) and has a son, Scorpius.
• Teddy Lupin (Remus’ and Tonks’ orphaned son) is hooking up with Bill and Fleur’s daughter, Victoire.
• Harry’s scar has not hurt for 19 years.

Some more information is out there circling, but I’m not about to read any spoilers, let alone posting them on the internet for people to get mad at me over.

If you aren’t a fan of the series (but seriously, how did you even get this far if you’re not?) odds are you’ll have no idea what the hell I’m talking about. Whatever. I don’t care. Go watch “Game of Thrones” or whatever. But if you *are* a fan, and you are just as excited, scared, and emotional about the next book as I am, just know you’re not alone. You can rest assured that come midnight I’ll be at a bookstore in a way-too-elaborate costume, tears running down my face, feeling like I’m a kid all over again.