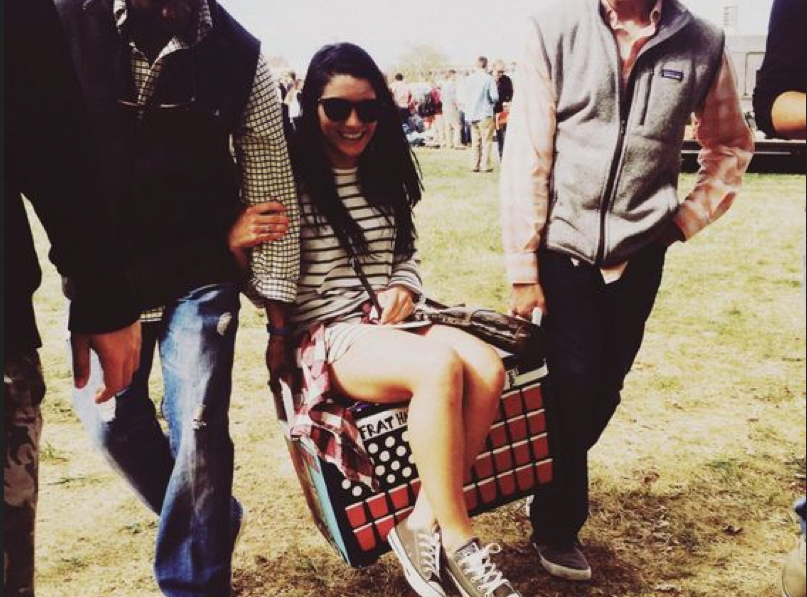 “Hi, everybody, it’s so nice to meet you all! I’ll be your campus tour guide today. Let me know if you have any questions along the way, and I’ll try to answer them as best I can. Feel free to direct any positive feedback towards my boss after the tour is over. I could really use the brownie points right now; that creepy motherfucker been riding my ass all week about “the importance of being on time” or some shit. Like it’s my fucking fault that dumb-as-shit barista can’t get my coffee order right the first time.”

“To your left, you’ll see the engineering building. It’s one of the oldest and most historically significant buildings on campus. I’m not an engineering major, but I happen to know for a fact that the male to female ratio is approximately 9 to 1. You know that that means, ladies. There’s some serious husband material up in this bitch.”

“Can you tell us about tutoring options?”

“Oh, sure! When I was a frosh there was this really hot guy in my statistics class that was basically Einstein with a hard body and flow that wouldn’t quit. I eventually roped him into doing pretty much all of my homework by pretending to give a shit when he explained why Jurassic Park would never have been possible. But shit got kinda weird after I accidentally shacked at his place one time. So when picking a tutor, be sure to find one that you don’t want to explore sexually. Or at least wait until after finals.”

“Up ahead you’ll see our recreational complex. It’s usually pretty crowded, and I don’t really like people, so I wouldn’t exactly say I’m a regular. But if you set up shop outside you can watch all the football players come and go pretty much all day long. And don’t even get me started on the lacrosse team. Sometimes I pretend to enjoy cardio just so I can sit in the steam room and gawk at all the sweaty man meat… what was I talking about again? Oh, the rec. Yeah.” *checks paper* “Visiting the rec is a great way to unwind after a long day of lectures.”

“Do they offer specific classes?”

“Oh, fasho. They offer a dope hot yoga class on Sunday mornings. Great way to sweat out the gallons of vodka cranberries you inhaled the night before. Last time I managed to wake my lazy ass up early enough to partake, I left the place reeking like what I imagine one of Charlie Sheen’s girlfriends smells like.”

“Our campus also maintains a variety of organizations to keep you engaged. Some are kinda lame, though. Like that one group that just walks around picking up litter. They don’t even have t-shirts.”

“Are you a part of any student groups?”

“Well, I’m in a sorority, obviously. I also occasionally alternate between College Republicans and College Democrats. I appreciate the right wing because they usually just spend their meetings getting shitfaced at a bar with a Ronald Reagan cutout, but the left wing’s group leader is the sexiest hippie I’ve ever seen. I know what you’re thinking, but no, I don’t only gravitate towards preppy, conservative men. I ain’t got no type. Which reminds me, I’m also a part of the hip hop fan club. We throw a lot of parties, but what else are we going to do with a shitload of bomb playlists?”

“And here’s the library! We have one of the oldest and most beautiful University libraries in the state! Plus, if you take a gander up to the stacks when it’s not too crowded, you can totally get away with nailing your study buddy. Great way to take advantage of a study break. But you didn’t hear that from me.”

“Late. Like, super fucking late. I don’t wanna scare you, but you’re about to embark on the four most draining, mentally tasking, groin-punching years of your life. I can’t tell you how many times I’ve cried my eyes out in these empty, fluorescent hallways.” *sigh* “I’m really gonna miss this place.”

“Aaaaaaand here’s where your tour really begins. Welcome to the greatest system on the planet, quite literally given to us by the Greek gods. Now, before I begin, I should let you know that some of you won’t make the cut for this lifestyle. I’m talking to you, with the cargo shorts and the polo tucked into your underpants. Seriously, what are you even doing?”

“You bet your sweet young ass I’m motherfucking Greek. Born and raised. That’s right. I was literally reborn into a world of philanthropy, sisterhood, and t-shirts for anything and everything you do. I mean it. You can’t even take out the garbage without someone thinking of the perfectly somewhat subtle sexual innuendo to print on on a frat tank. It’s a magical world I live in.”

“Which house are you in?”

“Sorry, but I can’t tell you. My boss keeps getting complaints. But I will say that you all should take a good, long look at that beautiful house right there. No, not that one. That one’s a piece of shit. Yeah, that one. I hear they’ve got some real gems in that place.” *flips hair*

“Unfortunately, this is where our tour ends. I know it says we have a few more stops before we’re done, but I thought these wedges were way more broken in than they actually are. I’m not willing to risk the integrity of my pedicure just to introduce you sorry sons of bitches to the campus, so if you could just find your own way back to the student center, that would be bomb. I’m gonna go bother my house mother for some Advil and the latest gossip on who’s getting slammed with a standards meeting.” .