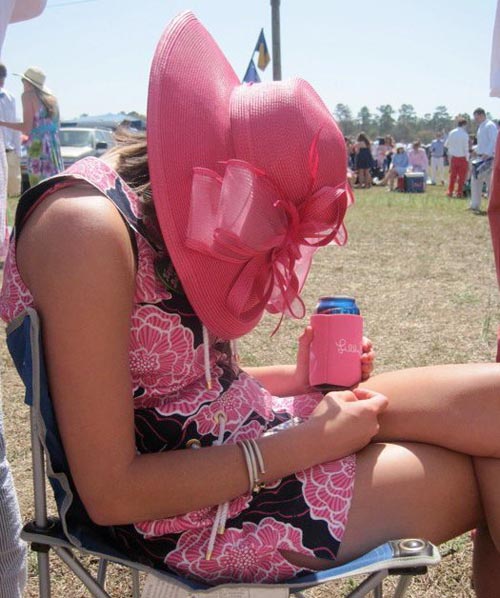 Every single chapter has the same bland explanation of what qualifies as “good” PR. It always tends to be along the lines of “Someone who embodies the true ideals of” yadda yadda yadda. Holding everyone to these expectations is, of course, bullshit. We all know that there’s no such thing as a “perfect” pledge class, so the chances of everyone in your chapter being classy women is shit slim to nothing. Typically, there are five types of PR you can bring to your chapter, and almost everyone falls into one of them.

You wear letters and do your makeup all the time, you volunteer at the local homeless shelter every day after class, and two months ago you found the cure for cancer. First of all, fuck you. No one likes an overachiever, but technically, there’s nothing wrong with what you’re doing. You network at socials and overall make your chapter look like a bunch of sexy intellectuals, so congrats on being a better person than 99% of the population.

But let’s be real. There’s only one of those in a chapter, two if you’re lucky. You’re more likely to get…

2. You Are Absolutely Useless

Somehow, you got lucky and even though your mom drank a gallon of wine every night during her pregnancy, you managed to avoid getting any of the facial deformities of fetal alcohol syndrome. Unfortunately, you have mashed potatoes for brains. Constantly on academic probation and labeled as “The girl who couldn’t figure out how her clicker worked” in every major class, you are neither smart, nor able to carry a conversation with anyone unless it pertains to the newest episode of “Say Yes to the Dress.” If there was ever an example of someone given a bid just to fluff up pledge class numbers, it’s you. Luckily for everyone, you never wear any letters or sorority shirts. Even if someone sees you walking into a chapter house there’s an 85% chance you got confused and walked into the wrong one anyway. No one in your chapter dislikes you, but they recognize that you’re an absolute waste of space and do nothing to help the sorority’s image.

You can hate these girls. You can try and revoke their bids. You can try to haze them so hard they drop, but you need to stand back and ask yourself…why? As long as they’re not running through campus screaming “I LIKE KUNG FU AND I’M IN PHI MU,” does it really matter? There isn’t a single chapter without a few wastes of space, so you might as well embrace ’em. Sure they don’t help, but they’re not hurting anything either.

3. Your Brain And Liver Will Be Dead Before Graduation

There’s something to be said for the girls that go out and have a good time. There’s also another, more negative thing to be said for the girls that go out and snort Adderall off the back of a frat house toilet while butt chugging Mike’s Hard because ingesting alcohol orally puts you at risk of caloric overload. When given the choice between attending a sisterhood event or day drinking with a 90% chance of blacking out before happy hour, you’ll be more likely to see this girl passed out next to a fire hydrant on a sidewalk than inside the chapter house bonding with everyone else. She really can’t help it, though, her memory’s pretty bad. It’s normal to frequently take eight shots in a night, because you forget that you can only handle three, right?

No, you’re a fucking alcoholic subtly crying for help by joining the Alpha Alpha chapter of whomever is helping neither you, nor your sisters. BUT, you can turn this complete ditch into a goldmine. Chances are this type of girl goes not only to the bars, but also to frat parties every, which logically means someone has to invite her. If you can get this chick to stop being an incoherent piece of fraterniture, she’ll probably be able to network enough to get your chapter in with the fraternities you want to associate with. Until then, though, she’ll just keep showing up to parties blacked out and unintelligible to the point that the only thing anyone can understand coming out of her mouth is the drunk hiccups.

One of the great things about being in a sorority is that invites to socials aren’t limited to a select group of girls. They’re extended to the whole chapter. This is awesome for everyone except for this girl. Sure, she gets at least a 3.0 every semester, talks during discussion sections, and actually pays attention in class, but that only goes so far. Her Greek life report card is as follows:

Academics: B
Philanthropy: B+
Sisterhood: B- (She made fun of the fat girls in the new pledge class. She couldn’t help it, but come on.)
Rageability: D

And that D does not stand for dick. It stands for her chilling in the corner with a shitty beer and just bopping up and down by yourself, because you don’t want to get too drunk. This doesn’t work. You know how much fun it is to be sober at a frat party? About as fun as a bag of dicks. A bag of dicks is only fun if you have a bag of vaginas to go with it, and even then, that’s balls to the wall weird. If you show up with those in tow, you’ll promptly be arrested for genital mutilation. Is that what you want?! HUH?!! No, it’s not. Doing this doesn’t introduce you to anybody and unless you’re the spit and image of Mila Kunis, no one’s going to take the initiative to talk to the odd girl standing by herself. In other words, loosen up. Life’s too short to waste and in ten years, you’re going to look back at the Animal Science exam you took drunk because you’d had a little too much fun the night before and chuckle.

5. Congrats, You’re About Par For the Course, aka Let’s End on a Semi-Positive Note

You do your makeup and hair when you wear letters and you have fun socially, but like I said you’re only “on par.” Sometimes you decide “Eh, my hair looks good enough and it’ll be dark at the party anyhow” so you let your looks slide. You’ll have days where it’s raining and you haven’t done laundry in two weeks, so you wear a sorority shirt because it’s the only clean thing you own even though there’s a 100% chance you’re going to look like shit that day. Well, guess what? The freshman to your left noticed the bags under your eyes and your letters. The frat party you didn’t do your hair for? One of the brothers wondered aloud who let in the chick with the wet poodle on her head.

Like I said, you putt par fairly consistently, but why not aim for an Eagle? Golf metaphors aside, while you’re not the worst, everyone notices you at your worst more than they notice you at your best, so keep that in mind the next time you decide to wear a crop top out even though you just ate a large Big Mac combo from McDonalds.