The Girl Who Always Stuck Her Tongue Out In Pictures 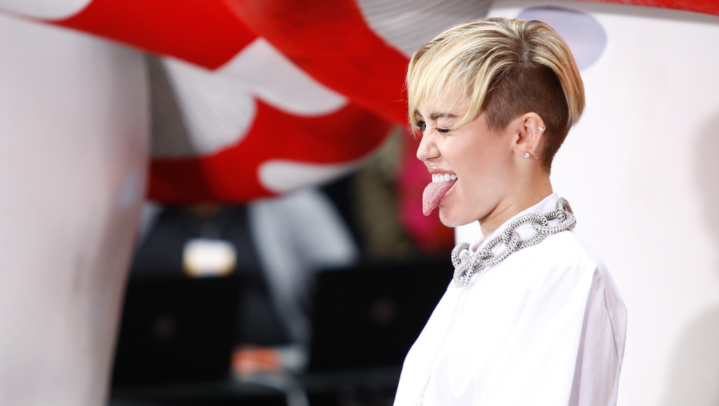 “Yessssss,” Jenny, the most attention-seeking one of the group shouted, easing her way into the center of the pack of girls.

“Alright,” he murmured, anxious to rejoin his friends who were playing darts in the other corner of the bar. “One, two, three.”

On “three,” magic happened, as it always does when a group of attractive 20-somethings stare into the soulless eye of a phone’s camera. Jenny, always the center of attention, squatted down slightly in the center of the group, her impressive cleavage spilling out of her crop top as she puckered her lips up toward the camera. Stacey, on her right, pretty much copied her as she copies everything Jenny does, and she also bent forward, pretending to kiss her best friend’s cheek. Megan, on the far right, put her drink to her lips and tossed her arm in the air in a totally effortless and carefree way. On Jenny’s other side was Courtney, who hoped the camera wouldn’t capture the fact that she just ate cheese fries, so she tried to hide as much of her body behind her friends as possible. Then, on the far left, was Rebecca.

Rebecca never knew what to do in pictures. It was hard because, if we’re being honest, she wasn’t the hottest one in the group. She might actually have been the *least* attractive one. None of them would ever admit that or say it aloud, but thanks to her average face, slightly doughy build, and her constant declaration that whiteners were too strong and hurt her teeth, she wasn’t usually the highlight of any picture. So, for the longest time, she would just smile, or duck face, or copy whatever Jenny did, because it was easier than thinking of a pose herself. But after a while (and after Jenny started hanging out with Stacey more), she realized she needed to become her own person. She couldn’t keep following what everyone else did if she ever wanted some attention for herself. How did she expect to break 1,000 followers if she never did anything risky? Shocking? Different?

So, when she was about three vodka sodas deep one day, she made the bold decision to stick out her tongue during a photograph.

She didn’t do it in the way children do when they’re being teased. No, she did it in the way slightly promiscuous college girls do it. Her mouth was open wide and her eyes were squeezed closed like she was just waiting for a big old penis to make its way inside. Ater the first time she tried this pose, she knew it was what she had been looking for. She got at least 20 more likes than her average on the picture, and the guy she had had a crush on in high school, Clark, actually slid into her DMs.

Since then, anytime a picture was being taken, Rebecca’s tongue would wiggle its way between her teeth and out of her mouth for the entire world to see. It didn’t matter if it was a group picture, a selfie, or even at a more formal situation, like formal or recruitment. As soon as the flash went off, her mouth would open as if on command.

For awhile, things were going really well for her. She hit her goal of 1,500 Instagram followers, thanks to all of the middle-aged men who didn’t really speak English that kept commenting on her pictures. After taking pictures in bars, guys would always come up to her and buy her drinks, and for the first time in a while, she felt that her hotness could rival that of her friends’. Clark even started talking to her more seriously, and she had a sneaking suspicion that he was going to lavalier her by the end of the year.

The only problem? Her friends absolutely hated the pose.

Megan, who didn’t really care, nodded mutely as she signaled the bartender to get her another drink.

“She sort of looks like I don’t want to say it, but…” Jenny continued, glancing around for support.

“Like a slut?” Stacey finished eagerly, happy to talk shit about one of her closest friends if it meant getting approval from Jenny.

“Thank God,” murmured Courtney, happy that no one was paying attention to the fact that she just ordered more queso. “I totally agree. So trashy.”

“Do we tell her?” Stacey asked, excited by the prospect of more drama.

“Hmmm,” Jenny thought, as her eyes focused on Rebecca who was leaving the bathroom and walking their way. “Let’s just see what happens. I’m sure she’ll grow out of it eventually.”

So for years, her friends held back their true feelings about Rebecca’s signature pose, and would always throw a double tap her way because that’s what friends do. They lie to avoid hurting someone, then talk shit behind her back. Still, they grew up, and social media poses became less important as they worried about getting their dream jobs and getting their boyfriends to commit. The friend group graduated college and spread out across the country. Some of them moved for love, others for money, and more and more days went in between them catching up. Still, they made sure to be there for the big moments, the important ones. And while they all grew and changed, it became clear on Rebecca’s wedding day that one thing had remained same…

“You may kiss the bride,” the officiant said, as Clark, Rebecca’s almost-husband leaned in to kiss her.

It was the happiest day of her life. She was marrying the guy she had loved since high school, and all of her closest friends were there to tell her how pretty she looked. As she turned to face her family and friends, she saw the photographer kneel in front for the first picture of the new husband and wife. Without thinking, she felt her tongue snake its way between her teeth as it always did, a habit she didn’t think twice about on her wedding day. But it was a habit that would continue to haunt her for the rest of her life.

Like in the hospital, after giving birth to her first child. A perfect baby girl that had her eyes and Clark’s nose, was plopped onto her chest after she spent seven hours in mind-numbing labor. She was exhausted and sweaty, still shaking from the adrenaline, but as her mother turned the camera on her, the first moments with her first child, she again, felt the presence of her tongue as it too, posed for the picture.

From there, it only got worse. More weddings, more births, more special moments were tainted by the fact that Rebecca could not take a single picture without sticking her tongue out. It wasn’t even that she wanted to anymore. Friends would take pictures with Recebba and “one without” so they wouldn’t have to have one bridesmaid standing there with her tongue out for nice, professional pictures. She was horrified by the way her body would pose when a flash went off, but no matter what she did, she just couldn’t stop. She tried therapy, hypnotism, and medication. She meditated, she did drugs, she got her tongue pierced and wore a special retainer but nothing worked — nothing stopped her tongue from seeking attention at the worst times.

And it wasn’t until the funeral that things really fell apart. Twenty years after she first discovered this pose, she was no closer to breaking her bad picture-taking habit. And when her husband’s father passed away, Rebecca sticking her tongue out in every single picture at the solemn affair was what finally broke down their marriage. He had had enough. He said looking at their memories made him sick because in the eighteen years they had been together, they hadn’t managed to take one nice picture, make one nice memory, together. So, after he buried his father that day, he told Rebecca that he didn’t want her to come home. Ever.

From there, Rebecca’s life got even worse. Her marriage fell apart, and she lost everything in the divorce. Everything, including her own babies. After the judge looked at all of the pictures of Rebecca through her life as evidence, he gave Clark full custody of their children. Which made sense because, hello? Our girl Becks didn’t take a single normal picture in twenty years. She had to move out of her beautiful home and live in a small studio apartment that smelled like soup. Over the years she adopted cats, of course, and as time went on and the number of cats she owned grew, Rebecca distanced herself more and more from her old life. Friends stopped calling and family stopped making plans with her. While living in a cat-piss infested apartment and having no family or friends who cared about her was sad, there was one bright point — she didn’t have to worry about sticking her tongue out in pictures anymore. No one ever asked to take her photograph again, and when she died in that apartment, her 27 cats ate her tongue.

So, don’t be like Rebecca. Stop sticking your fucking tongue out in pictures..