The Importance Of Discussing Sexual Assault, As Told By A Victim 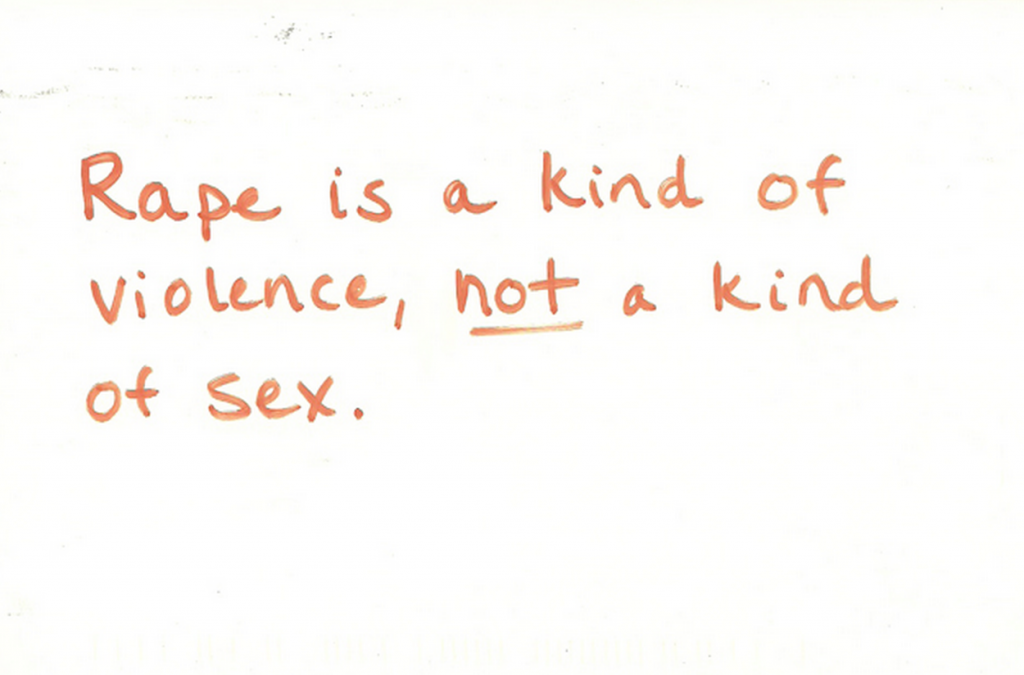 Recently, the Huffington Post published a report that said that one in every five women will be sexually assaulted in her lifetime. Did you know that 80 percent of those women are under the age of 30? How about that victims of sexual assault are four times as likely to consider suicide? That they’re six times more likely to suffer from post-traumatic stress disorder? I’m sure you probably did, because we see these statistics all the time. We look at them and we talk about how sad it is, but to us, they’re just numbers on a page. So let me make this more real to you: I am the one in five.

When I was 14, I was sexually assaulted.

If you have been assaulted, it was not your fault. I waited for a year and a half to hear those words. You shouldn’t have to. I don’t care if you knew him, if you met him at a party, or if you had no idea who he was. I don’t care if you were drunk or if he slipped you some kind of drug. I don’t care when, where, or how it happened. There is no reason for a man to ever put his hands on you without your permission. Nothing you did “asked for it.” You are still beautiful. You are still innocent. He didn’t take anything from you. He has no power over you, your life, or your future. Trust me, I know. Those are some of the best, hardest things you will ever hear. I still almost cry every time someone says them to me, because even almost six years later, I have a hard time believing they’re true.

Of the percentage of attempted and completed sexual assaults in America every year, 25 percent of victims are women between the ages of 18 and 24. That’s right, they’re college-aged women. Girls just like you, just like me. Ladies, let me tell you now, if you are the victim of a sexual assault, the best thing that you can do is report it right away. I waited so long that it was impossible to catch the man who hurt me. Don’t do that to yourself. No one is going to judge you. No one is going to think any less of you because of what happened. Sixty percent of sexual assaults go unreported every year. Sixty percent of rapists walk because they’re never in any danger of going to jail. They walk because their victims are too ashamed, too afraid to speak out against them.

It’s time that we open a dialogue on our campuses. One in four women on college campuses are the victims of an attempted or completed sexual assault before they receive their degree. How is that even possible? Every college campus has its own police force, so how are these people still getting away with it? The answer lies in the legislation. Previously, students have been taught that “no means no,” and that if a girl doesn’t say no, she’s consenting. That if she doesn’t fight back, she wants it. It makes saying “not right now” or even just “no” seem like a negative thing, rather than a choice that anyone entering into a sexual encounter has the right to make.

However, some schools have begun adopting the “only yes means yes” policy of affirmative consent. Basically, if both parties do not clearly communicate a “yes” before sex takes place, consent is not established. This will prevent defenders from asking victims if they “fought back” or if they said no. If only yes means yes, then anything other than that is a no. President Obama’s new “It’s On Us” campaign places the responsibility for stopping on-campus sexual assault on the entire campus and student body, but predominantly targets male students. In January, when he announced the formation of a task force, President Obama said, “We can do more to make sure that every young man out there–whether they’re in junior high or high school or college or beyond–understands what’s expected of them and what it means to be a man, and to intervene if they see somebody else acting inappropriately.” The “It’s On Us” campaign will partner with colleges and private companies while using social media to raise awareness to create an on-campus atmosphere where the victims will be supported and sexual assault is not tolerated. New legislative models for campuses are supposed to be announced by the end of this month.

As we can see in the case of Emma Sulkowicz, the current legislative measures are not enough. There’s still not enough being done for the girls like Emma or for the girls like Lizzy Seeberg, who committed suicide nine days after reporting an alleged rape by a Notre Dame football player. Where is the justice for girls who have to look their rapists in the face every day? Why is it okay that a Kansas University student is convicted by the school of “non-consentual sex,” yet receives only a four-page paper and probation as punishment? There is not enough being done to protect our young women in an environment where they are supposed to be safe. When these women manage to work up the courage to report their assaults, they’re told that because they were drinking, because it’s “he said, she said,” there’s nothing they can do.

If you have been assaulted, I’m not going to tell you that you’ll ever be the same. I’ve never been the same. I’ve had nightmares almost every night for six years. I have a hard time sleeping without some kind of light on. There isn’t a day that goes by that I don’t feel inferior compared to girls who haven’t experienced what I experienced. There isn’t a day that goes by that I don’t think about what happened to me. Right now, you probably feel that way, too. You don’t feel like you’re ever going to be okay again. Some days, I feel like that, too. Some days, I can’t even get out of bed. But I refuse, above all else, to be a victim any longer. I am not a victim of sexual assault, I am a survivor. And so are you. There’s a long road to recovery ahead of you, and it might be a long time before you feel okay. But guess what? You will be. You will survive and you will grow to be the beautiful, incredible woman you were intended to be. He can’t have control over you unless you let him. What he did doesn’t define where you go from here–only you can decide that.

It’s time that we, as women in college, whether we have been the victims of an assault or not, stand up and say that it’s not right. That it’s time colleges stop criminalizing the victims. That we aren’t going to allow them to silence us for any reason. Things will never change if we don’t push to change them. It’s time to start supporting our victims, not blaming them. Tell your administration, tell your lawmakers. Tell them that we’re not going to allow ourselves to sit by quietly as our fellow students are left alone to suffer after what could be described as the most horrible thing that can happen to a woman. Sexual assault is a crime of power. It is a crime that violates its victims physically, emotionally, and mentally. Sexual assault feeds off the terror and silence of the victim. So start the conversation at your school.

If you have been sexually assaulted, you can contact the National Sexual Assault Hotline at 1-800-656-HOPE or visit its website.