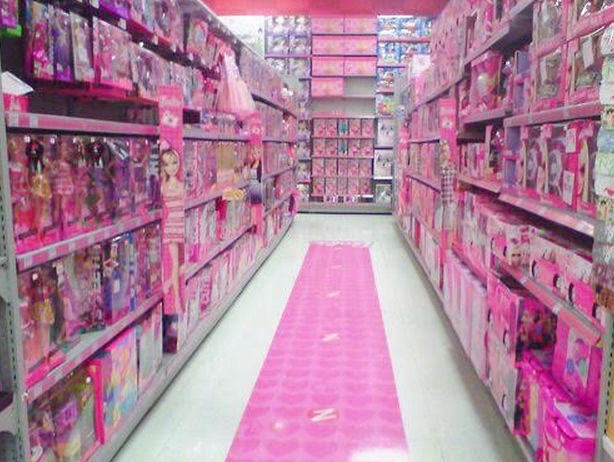 I took a deep breath, and tried to bury my emotions before I walked inside. I was going to have to be completely straight-faced if I wanted to pull this off. I put my tiny hand on the doorknob and walked inside. I heard my mother’s voice say, “Okay, well the kids just walked in, so. Okay. Okay. Stop it!!!! What did she say?” I had a few minutes. I put my shoes away, pulled a piece of paper out of my backpack and walked downstairs.

I stood in front of my mom, holding my report card, waiting for her to look up at me.

“I got my report card today,” I said as timidly as I could muster.

I could see her getting upset, or annoyed, or something. This was going flawlessly.

“And what were the rest?”

“Let me see that!” my mom smiled. She grabbed my report card and confirmed that I’d gotten an A+ in every subject aside from gym (a telling indication of how my future would pan out) and history. “Well, we’re going to have to celebrate, aren’t we!”

Moments later, we were en route to Toys ‘R’ Us. Like all children experience, a sense of pure happiness washed over me upon entering the toy store, a feeling I only come by now when I take a negative pregnancy test. I squealed with delight. Once there, I breezed through Animal Alley, and rushed passed the legos, and then, there it was.

The pink aisle was my favorite thing in the whole world. It was pretty, and exciting, and just for girls. And I loved it. I loved the idea of being feminine, even as a child. I wanted everything I owned to be pink, only occasionally settling for its less hot cousin, purple. I liked playing in my mother’s old makeup, and having painted nails, and playing house with baby dolls. I occasionally borrowed my brother’s G.I. Joes, but only because Barbie needed a new boyfriend when she realized Ken was gay. I liked going shopping, and buying new clothes, and I only wore dresses, because jeans were boy clothes, and I wouldn’t be caught dead in the things. My parents tried to get me involved in sports, and while I loved dance and gymnastics, my sole question after my first tee-ball game was “Now that we’re done playing ball, is it time for tea? I thought this would involve a tea party.”

Fastforward fifteen years. I now consider myself a feminist. I like sex, and I like talking about sex, and I think that all women should have the exact sex lives they want without it meaning anything about what type of person they are. I am way too aware of the subtle things in society that allow the double standard to exist — like a movie with a simulated blow job being rated PG 13, while a movie showing a guy coming up from under the covers is rated R — and while we’re on the topic, the fact that there is no noun equivalent to “blow job” for oral sex on a woman. (I say we call it a happy meal.)

I don’t feel like I even need to mention the wage gap. No one is out there saying “Oh, this one’s got a vagina! Knock a few bucks off her paycheck.” There are a whole ton of statistics as to why women make less than men, including but not limited to going into fields that typically earn less, like education. My question is not “Why do women make less” OR “Why don’t we get women more interested in engineering?” It’s why are fields that are traditionally feminine valued less. I think we can all agree that education is pretty important. Why don’t we make it a more rigorous degree, a more competitive field, and pay educators more?

I am entirely aware of sexism within the entertainment industry, as I am part of it. “Girl comedy,” is this very specific type of humor that is catered almost exclusively to women. “Boy comedy” is just comedy. And it’s not because women are less funny. It’s because men are so conditioned to only have to care about things that specifically fit their needs, and women are conditioned to accept that.

However, I think there is a LOT wrong with feminism as it stands. Namely, shit like this.

Don't do this, @Target pic.twitter.com/cfh3cp5Nqa

The tweet went viral earlier this month, and something about it didn’t sit well with me. The point, of course, is that little girls can like building sets just as much as boys do, and to use the qualifier “girl,” somehow negates that. It aims to appeal to a genderless society. The thing is, I’m not sure a genderless society is possible — and I’m not sure that’s a bad thing. The fact of the matter is most (not all) little girls are more interested in Barbies than building. And of the girls who want to build maybe some of them they still want their building sets to be pink. Or maybe they just want to see a little girl on the box playing with the toy, so they feel like it’s okay. And maybe, the parents of those girls need a way to find the toy that best suits their child. Had the store been selling male dolls for little boys, surely the sign would have said “Boys’ Dolls,” and I don’t think there’s anything wrong with that.

We’re getting to a point where we’re so hellbent on everything being equal, and on sameness, and catering to everyone’s over-sensitivity, that we’re forgetting something major. Some little girls — AND some adult women — really like the pink aisle. We like being feminine. We like doing our hair and makeup. We like shopping — and we like that we like shopping. Trying to make society an androgynous entity, frankly, ruins that. More men like sports than women, and more little boys like building sets than little girls. And I don’t feel like an asshole for saying so.

I’m not saying that every girl has to be one way, or every boy has to be another. I’m not saying I don’t believe in equality, socially, economically, emotionally, or politically. I’m just saying there’s a way to fight for equality without destroying the pink aisle..