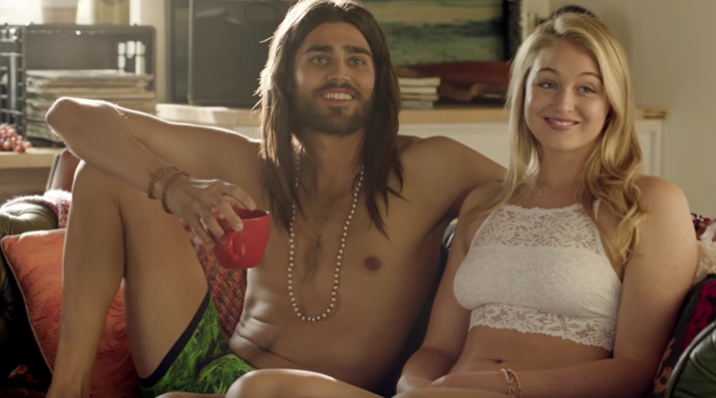 A few weeks ago, we reported on Aerie’s newest campaign. Much like their “real” campaign with women, using girls who looked like natural people and refusing to airbrush, they decided to do the same thing for men. Because men’s natural, hairy, doughy bodies are beautiful too, right? Of course, we decided to poke fun at the whole thing. I mean sure, we’re all for feeling good about yourself, but some of these ads were ridiculous.

Like, sure. The idea is good-ish. Guys should feel confident about their bodies (considering how guys with beer guts and horrible personalities call us ugly and “only date dimes,” though, I feel like a lot of them already feel pretty good about themselves). But the execution was just goofy AF. While everyone got their panties in a bunch (geddit?) about us laughing at this ad, it turns out we were right about this whole thing. I’m not gonna say I told you so, but…

According to Cosmopolitan, the whole #AerieMAN campaign actually was a joke, because even though we’re all about body acceptance, it seems like we’re not quite ready for dad bod models. The shame. American Eagle, the company behind this PR nightmare, said late in the day on April 1st (like, after 8 p.m. late) that the #AerieMAN campaign, which they launched on March 24, was actually a big, fat, flaccid joke. Because everyone knows that the key to a good April Fool’s joke is to release it a week early and act like it’s actually real for an absurd amount of time.

Some aspects of #AerieMAN were just for laughs, but we take body positivity VERY seriously: https://t.co/FHqswrlLg9 pic.twitter.com/lXPuX6whPg

Yeah. It’s one thing if they picked guys who looked like our boyfriends, with goofy smiles and on the verge of skinny-fat but come on. The guy doing yoga? The pelvic thrusting? The dumb confession-like interviews? Something was off, and they were just begging to be made fun of. And according to a press release from the company, that was the point. Duh.

Following the successes of the Skinny Skinny Jean in 2013 and American Beagle Outfitters in 2014, the brand reveals today its #AerieMAN campaign, featuring a mix of quirky characters of different sizes and personalities sharing “real life” stories in their skivvies, was all in good fun to parody the #AerieReal campaign by Aerie, a leader in body-positive marketing.

The #AerieMAN campaign, which sparked immediate online chatter and debate, challenged how brands market to the male customer, and portrayed a lighthearted, creative interpretation of the #AerieReal message, a body-acceptance movement launched in 2014 where Aerie, the lingerie and apparel brand from American Eagle Outfitters, stopped retouching its models.

“We aren’t afraid of being bold in how we engage our customers, whether through a video that makes you think twice, or challenging the norm in how a brand markets to men,” comments Chad Kessler, American Eagle Outfitters Global Brand President. “We are an all-inclusive brand and we know our male customers respond to humor. We look forward to continuing to innovate and evolve the American Eagle Outfitters product offerings.”

And what’s a good joke without the internet getting pissed?

Who sat down and thought "You know what'd be funny for April Fools? Using plus size models on our site!" I'm disappointed. #AerieMan

@AEO No, you obviously don't. If you did, #AerieMAN would be real & you wouldn't have used body positivity as an April Fool's "joke".

So apparently the #AerieMAN campaign was a parody. Sorry, @Aerie, but I'm missing the part where it was funny. https://t.co/fv3UEGsx8F

I don't get what's funny about the #AerieMAN "prank." I'd LOVE to see more body-positivity campaigns for men.

On one hand, their PR department fucked up. Bad. On the other hand? It wassss sort of funny. I mean, come on. Did you really think this was a real ad? They got us, and they got us good.

The truth is — it’s funny. The way they did it was horrifying, but looking back at the ads, you can see that it was a joke. Let it be funny. And if you’re still not laughing at it, laugh at Aerie’s marketing department that will make any and all of your social media faux pas look like amateur hour. In response to this hell hole of a situation, AE has announced that they’ve donated $25,000 the National Eating Disorders Association. But wait, in addition to throwing money in the hopes of getting people off of their backs, it appears that they actually will end all retouching of male models in its underwear and swim images as well. So what might have started out as a joke, is turning into reality.

Say goodbye to abs and hello to dad bods, ladies. Equality, and having sub-par bodies, is now..