The Title Sequence Of “AHS: Cult” Was Just Released And Yup, Trump’s In It 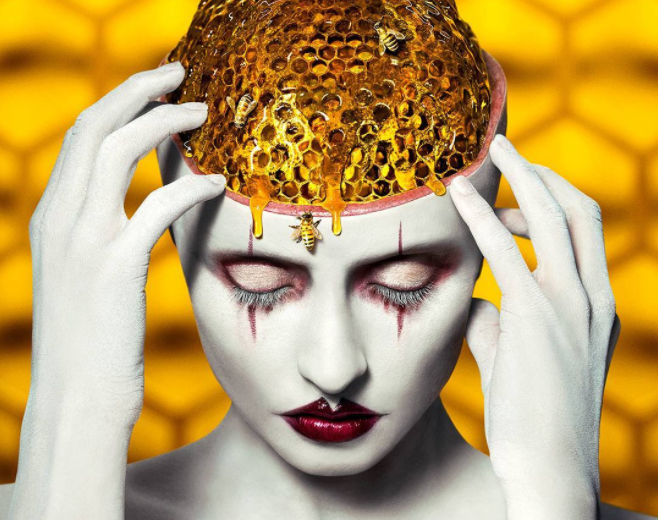 Last season of “American Horror Story” really took us on a trip. First, we didn’t even know that the season was about until it started. And then, the season started and we *still* didn’t know what it was actually about for a long ass time. All in all, it ended up being pretty impressive, and most of us were glad, as always, that we spent our evenings unable to fall asleep thanks to Ryan Murphy.

One thing that most of us lowkey hated, however, was the fact that “American Horror Story: Roanoke” didn’t include the classic title sequence we’ve grown to love over the past seasons. The creepy music. The little hints of what the season would hold. Jessica Lange’s name at the beat drop (RIP) — it all came together in a way that made us oddly aroused and excited about having the shit scared out of us.

Thankfully, for season seven, Ryan decided to listen to us. You know, for once.

Wait a minute…you want the main title sequence to return this year?!

And yesterday, he released this work of art and ho.ly. shit. It really is something.

Watch it begin. Witness the opening credits for #AHSCult. pic.twitter.com/7X3Cy9W7DV

Now, we know that “American Horror Story: Cult” is going to be based on this past election, and while no one is actually going to play Trump or Clinton, those masks aren’t really hiding what all of this is about. Sure, we have enough politics in our feeds already, but at this point, it’s pretty unavoidable. I’ll take my dose of political shit with lots of gore, sex, and Evan Peters, thank you very much.

Obviously, some people are hating on it because the song is slightly different (isn’t it always?), a lot of names we’ve grown to love are missing from the sequence and the season, and it’s giving off a somewhat “Freakshow” vibe, which wasn’t really a crowd-favorite. Still, from the allusions of Trump and Clinton, to the use of patriotic horns and snares, to the display of chemical warfare and animal testing, it’s pretty easy to say this season is going to be fucking explosive. Literally.

“American Horror Story: Cult” is set to air on Tuesday, September 5th on FX. But if that’s too far away for you, check out ahscult.com. With behind the scenes looks, creepy interactive shit, and “The Ring” style clips, it promises to get you excited and maybe give you a seizure. Win-win, amiright?.