The White Girl’s Guide To Surviving The Zombie Apocalypse 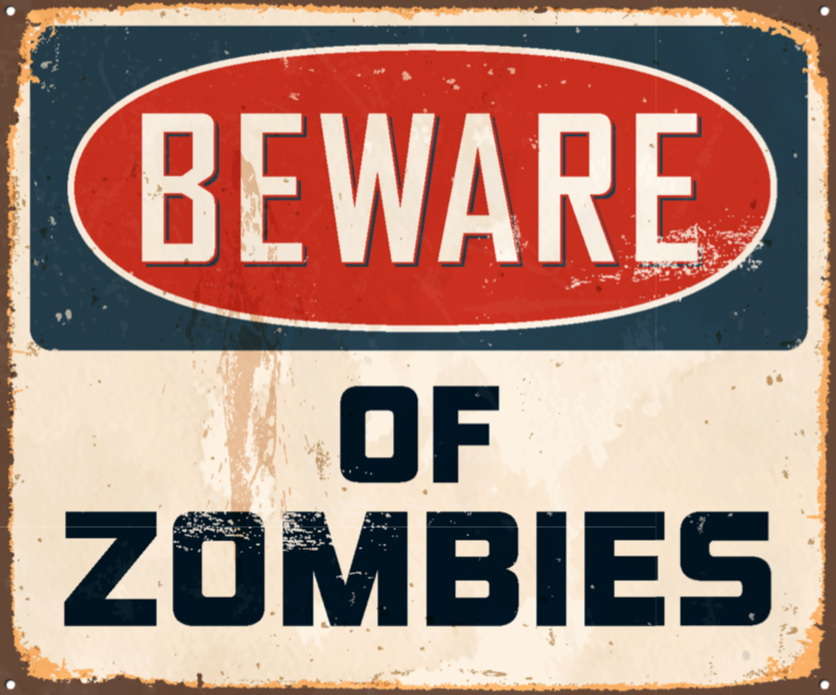 Now more than ever, people are seriously asking, “What would you do if the apocalypse happened?” It used to be a hypothetical question, scoffed and laughed at by the majority of people. But after that Ebola scare, it’s a serious matter that we all needed to start preparing for, like, yesterday. Let’s put it this way–what’s the point of studying for your ancient civilization exam if there’s a chance everyone gets Ebola and turns into Ebola zombies and you don’t even have an exam anymore? Now you’re being chased by decaying zombies with bleeding eyes and running like a 16-year-old at a busted house party. Oh, but don’t worry, you know all the theories behind Machu Picchu and what kind of diet the Incas ate in the wintertime. Yeah, that’ll fucking save you.

At the risk of sounding like an end-of-the-world-believing freak who sympathizes with the apocalyptic preachers outside of subway stations, here’s your actual grocery survival list. I mean, who wants to live in a world of dried fruit, mistrust, and no Twitter? Not me, and certainly not you.

1 Trip To Costco
Hint: For this trip, pretend like you’ve just discovered Costco for the first time–like, you literally can’t believe you can get a tent for your entire family, a 10-pound bag of almonds, shampoo, and a hamster all in one place. In fact, if possible, stay in Costco for the end of the world.

1 “Paleo Dieting For Dummies” Book
WTF are carbs? Come Ebolapocalypse time, you’ll literally have to survive on meat and veggies. Also, processed sugar is a thing of the past, so you’ll look phenomenal, too. What a shame Instagram will no longer be around–you’d have one hell of a #transformationtuesday.

12,000 Industrial-Sized Nutella Jars
What’s the purpose of surviving the end of the world without Nutella? None.

90 Gallons Of Wine And Vodka
Who knows what you do to pass the time when the world ends, but who cares as long as you have booze, right?

A One-Year Supply Of Adderall
The Adderall will come in handy when you need to ration your food. It will also keep you awake to avoid Ebola zombies, and it will make you focus on building a shelter inspired by Jay Gatsby’s West Egg Mansion, because, let’s be honest, you can’t live in some peasant lean-to, right?

150 Packs Of Feminine Products
Apparently no apocalypse guide cares to think about our time of the month. Think about how much it sucks when you realize you’re out of tampons. Now think about being all alone after the world has ended and getting your period. Yeah, those tampons are going to be clutch in about 28 days.

2 Cartloads Of Chocolate
This will also come in handy in 28 days. It’ll save you from starting a second apocalypse when you’re craving something sweet.

10 Hummus Tubs
You’re not gonna eat all those veggies bare like a savage, are you?

All The Diet Coke In The Store
I actually don’t know the difference between water and Diet Coke, especially since about 20 percent of my bloodstream is straight DC. (The other 80 percent is a mix of Starbucks, alcohol, and the other stuff blood is made of.) So, hydration.

Proper Clothing
The pressure is on, because this is what you’ll have to wear for the foreseeable future. Stick with what you know: leggings, oversized sweaters or crew neck sweatshirts, tank tops (so you can show off your killer bod when the paleo lifestyle kicks in) and comfy boots. And a scarf, because accessories matter even when no one is around.

A Weapon
Not everyone will fight with gossip and words, so you need to be one step ahead. The first thought everyone has for a weapon is “gun,” so if you know how to use one, go for it–even though you probably won’t have your spirit jersey on or someone to take your picture while holding the gun. You win some, you lose some. If guns aren’t your thing, take a page from Rapunzel’s book and use a frying pan. Kick ass and cook some delicious dinner from a recipe you remembered from Pintrest all with one tool. Super resourceful.

A DVD Player And DVDs
Seriously, what are you going to do with all that extra time? Pick your nose? Eh, hard pass. Make sure you get a DVD player that runs on batteries (or take an Adderall and figure out how to steal solar panels from somewhere…you’ve got time) and get every season of “Gossip Girl,” “The Sopranos,” “Real Housewives,” “Say Yes To The Dress,” “Sex and the City,” “Girls,” and anything else you can get your hands on.

Yankee Candles
Electricity is a thing of the past, so when the sun goes down, something needs to light up the room (other than your smile, of course). Candles will make sure that you can see no matter what the time is, and you’ll be in a super-shelter that is warm, bright, and smells like sugar cookies. Want to smell the outdoors without risking your life? Sage and pine will burn for your nature needs. Yankee Candle, how do you do it?

Your wits
So this isn’t a supply per se, but you’ll need them. You know how we have that thing called “recruitment,” where we judge girls who we’ve just met to see if they can sit with us? That’s, like, exactly like the apocalypse. Your awesome shelter that’s probably bedazzled–because why not–is totally going to attract those who weren’t as prepared as you, but how do you know if you can trust them? Easy. Use your recruitment skills that have been engrained into your instincts by your recruitment chair to decide. Or, throw that all out and follow the number one rule of randoms trying to talk to you: ignore, ignore, ignore. Besides, they probably spit when they talk, and you don’t need that fear in your life.

Hakuna Moscato (@HakunaMoscato) is a contributing writer for Total Sorority Move. and Post Grad Problems. A born and raised Maryland girl, she's obsessed with the Baltimore Ravens, Old Bay, and anything that has the Maryland flag pattern on it. She's a newly retired student-athlete and sorority girl, but not quite ready to call herself an adult, especially since she still has to be carried out of bars. With a Long Island in hand, she's ready for whatever life is throwing her way. Maybe.