The Worst Possible Things That Could Happen During Sex 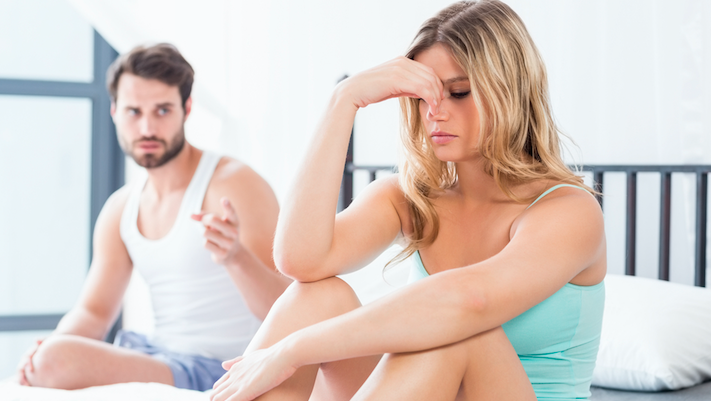 Recently I was hanging out with my friend and her boyfriend and, naturally, the second we hit our third vodkas, we started talking about the best ways to reduce our carbon footsteps and the amount of trash we produce. J-fucking-kay. We were talking about sex. Baby-making. Fucking, if you will. And as we got down into the nitty and the oh-so-gritty, they told me a tale so horrendous it caused my vagina to literally seal itself off.

Basically what happened is that the guy, in total guy fashion, knew the girl was coming over and knew that they were going to bang (they had been dating about three months, so they were still hooking up every time they saw each other). He had been running around all day and knew he should take a shower but alas, he was too lazy. So, what did he do? He dumped about a half a bottle of cologne on his dick and called it a day. Naturally, the second she hopped on, her insides started screaming. Her outside started screaming too, actually. They had to call the hospital. She had to put ointment all up in there. And, obviously, no one got to orgasm.

In his defense, he said he thought it would smell good, and if he got lucky and got a blowie, maybe even taste good. Which shows how fucking dumb guys are because in what world does perfume taste good? Whatever. I digress. The point is, these two have been together forever, are obviously going to get married (assholes), and lived to tell the tale. There are a hell of a lot of horrible things that can go wrong during sex. So, if you ever feel awkward about the time you accidentally called you boyfriend your ex-boyfriend’s name, I’m here to make you feel a hell of a lot better.

4. You get shit on his dick upon removal.
Just look away. Be cool. Lock yourself in the bathroom. Die?

5. Or you just completely shit on his dick.
Who needs to have love and relationships anyway? I hear the local shelter has plenty of adoptable cats.

6. You get toilet paper stuck in your vagina and he has to pull it out before going down on you.
That’s what you get for buying generic!

7. Or worse, you forget about the tampon chillin’ inside of you, and he comments on the string mid-oral.
Oh, that? No. That’s just part of a female anatomy. You didn’t know that? God. What do boys learn in school?

8. You start your period and bleed all over his shockingly clean white sheets.
Shame on his mom for buying a college guy white sheets.

9. Or, even worse, you start your period while he’s making basecamp south of the border.
“No, that’s not blood you’re tasting. Are you sure you haven’t gargled any pennies today?”

10. Someone farts. Doesn’t matter who.
The best way to snuff out any and all arousal you were currently feeling.

11. Or better yet, you make another very loud sound from another very small hole in your body.
10/10 times will happen whenever your knees make it up to your ears. Plan accordingly.

12. You call the person you’re sleeping with a name that isn’t theirs.
“No, I wasn’t thinking about him! I mean, if I was, it was how much *better* you are at that move than he was…”

13. Your ex decides to call you mid-penetration.
Bonus points if you actually answer it.

14. You decide to give a blow job. To completion.
Yeah, it’s not the *worst* thing that could happen. But when you’re drunk and randomly decide to swallow, it’ll feel pretty brutal.

16. Or you start to feel sick mid-blowie and immediately upchuck all of said Taco Bell.
Next time he’ll think twice before pushing your head down. Lol. Like there would actually *be* a next time.

17. Actually, him pushing your head down in the first place.
That shit just really sucks.

18. He tells you he wants to see other people while he’s still inside of you.
Couldn’t you have waited like, two more minutes?

19. He orgasms right after he breaks up with you while having sex with you.
Welp. Looks like it’s time to hit the ol’ dusty vagina trail.

20. You start crying.
“No, no! It’s not you. I just thought of my childhood dog that passed away four years ago.”

21. He starts crying.
“If I give you money from my wallet will you just stop? Please?

23. He accidentally calls you “Mom” right when he comes.
Guess you know how close he is to his folks now, huh?

24. He accidentally breaks his dick mid-thrust.
Nose goes on who has to tell the doctors what happened!

25. Or you accidentally break your vagina.
Now sure how, exactly, this would happen but if there’s a sexual will, there’s a way.