Things Every Senior Needs To Do 2 Weeks Before Graduation 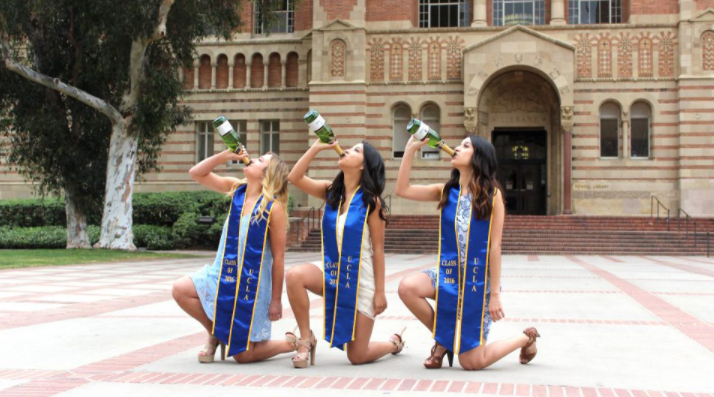 Well, this is it. I know you’ve sort of been thinking it for a while, but now as we’re past spring break, Easter, and in most cases, formal, it’s time to accept the facts. You’re graduating. You’re really, actually graduating. Even though it seems like just yesterday you were using your fake to get drunk off sex on the beaches, with just about two weeks until the commencements begin, it’s time to admit it. There are just a few procedural finals and ceremonies between you becoming one of those real adults. So, as you get ready to stumble across that stage and flick your own tassel (sounds dirty, yes?), here are a few last things to check off of your ever-growing list.

1. Go To Your College Bar

Not just any college bar. Go to *your* college bar. The one you frequented before you were twenty-one. The one with the sticky floors, the bathroom that always smells slightly of vomit, and the crowd of underage kids you’d basically get arrested for talking to. Drink the shitty, watered-down vodka. Dance on the slippery tables. Hell, throw up in the disgusting bathroom. Do it all one more time for the younger self who thought that college would never end.

2. Hook Up With Someone You’ve Always Wanted To

For all of the ~single ladies~ out there, now is the time. The time to have a sloppy, you’re-going-to-get-sent-to-standards DFMO with the hot guy from your English class. The time to take him home even though he doesn’t know how to spell “orange.” The time to do whatever you want with anyone you want. I’m not saying be a slut, but I’m also not not saying that, you feel? Sorry to all the ladies in a relationship, BTW. You’ve already won enough — this one’s for the girls flying solo.

I don’t care if you think it’s time-consuming and tacky. I don’t care if your school forbids it (what are they going to do, not let you graduate after you’ve technically already graduated?). It’s like the final crafting exam for being in a sorority, but for once you actually get to keep your hard work. After taking a million pictures for Instagram and hanging it up in a shadow box that you can stare at postgrad, you’ll be happy you decided to throw a quote and some rhinestones on there.

It’s not nearly as fun as getting drunk at a shitty bar or hooking up with a shitty guy, but it’s just as important. Odds are, you had a professor or a counselor or a staff member who helped shape and guide you. Maybe it was the strict guy who made you actually learn the material, or maybe it was your advisor who supported you each and every time you changed your major. Bake some cookies, write a note, and deliver your heartfelt thanks in person. You never know how far a kind word and appreciation can go. It’s time to actually sort of be a decent person in society. Plus, did you know letters of recommendation are a thing? Bribing is way easier while you’re still on campus.

The place where you first learned how to hold your liquor, that tacos at midnight are always the move, and the joy of trying to hookup in a twin XL. Try knocking on the door of your old room and see if you can’t bribe the 19-year-old in there to let you say goodbye. If she’s not down to let some strange, washed-up senior in her room, stand outside and take some dorky pictures. It’ll feel lame in the second, but you’ll be happy you did it for years to come.

If you hate it already, odds are it’s not going to get better. But projectile vomiting from drinking a marg after college is frowned upon. Decide once and for all if this devil water is for you while you still have the chance to sleep off your hangover until 3 p.m. the next day.

7. Go To Your Last Chapter

I know you feel like there’s no reason. You already lied about your service hours. You already had formal. At this point, you have nothing to fear from the younger-than-you exec board. You don’t really have to go to chapter. Nothing is going to happen if you don’t. You’ll still get to wear your letters when you walk and your daughter will still someday be a legacy. But from someone who avoided chapter as much as possible without getting kicked out: go. Do your handshake one last time. Sing your songs and say your ritual and soak up all of the faces you love (and love to hate) in the place you called home for the duration of your undergrad.

Not just perfect pictures for Instagram. You have enough dumb smiling ones with the silly t-rex arm in your camera roll already. I mean take a million pictures of life. Snap away at meal plan. Document your walk to your evening class. Go to your favorite floor of the library, your old apartments, your ex-boyfriend’s frat house and take flawed, funny, let’s-never-post-these, boring, ordinary, extraordinary pictures. Over time you’ll forget the familiar path you took to your sorority’s house every day for four years. You’ll forget what buildings looked like, and you’ll forget the faces from when you were all young and didn’t have that “just worked from 9-6” look.

9. Get Your Résumé In Order

It’s just about the lamest thing you can do (besides taxes, but we’ll cross that bridge next year). You’ve put it off and put it off, but now it’s time. If you don’t have a job yet, you have to actually start making that résumé look good. You’re paying for a lot of really good resources, so take advantage of your career center while you have the chance. Before you walk across that stage, everyone wants to help you succeed. After, however, you’re just the dummy who didn’t prepare.

10. Hit Up All Of Your Go-To Restaurants

The one with the pizza slices the size of your head. The one with the free chips, salsa, and mixed drinks they served to minors. The one with the cheap hibachi noodles, and the one with the hangover-curing sushi bowls. Right now they seem like staples, but once you move away from your college town, you’d be surprised to find that a bowl of chicken fried rice costs more than your university’s $3.99 special.

Whether you have two weeks or two months until the big day, it’s going to go even faster than these past four years did. Stay up late, take the shots, go to the events, and cherish everything your college has to offer. You can always go back to the place, but you can never go back to this time, right now, as an undergrad. Enjoy every moment you have left, and get excited: **the best is yet to come..

**Okay, that’s a lie. The best was in college — I can’t deny that. But hey, at least now you’ll be able to buy wine that isn’t in the box and feel pressured as more and more of your friends get engaged. Get psyched!