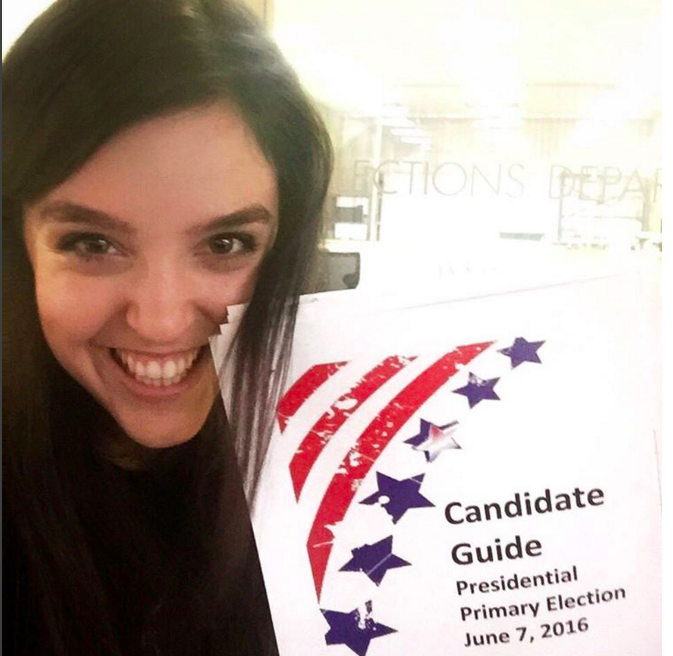 When most of us are 24, we will still be trying to figure out our lives. We’ll be in grad school, or in some entry level job, pondering the next steps in life while trying to save up enough money to move out of our parents’ house. Everything – life, relationships, the contents of your tote bag – will be a giant mess and you’ll just be doing your best to make it through the day.

And then there are people like Erin Schrode, who will make the rest of us feel like disasters because she’s actually accomplishing things. Like running for Congress.

Yes, 24-year-old Erin Schrode is running for Congress, but let’s make it clear: Erin is not your average mid-20s girl. She’s already the co-founder of Turning Green, a national non-profit organization devoted to education and advocacy around environmentally sustainable and socially responsible choices for individuals, schools, and communities. According to her website, she’s also been “brand ambassador for IKEA and will.i.am’s EKOCYCLE, spokesperson for leading organic brand Nature’s Path, face of Seventh Generation personal care line, advisory board member for Myspace, Intel, Run for America and Mobile Kitchen Classroom, lead witness before California congress and DC lobbyist, creator of a green skincare collection with Whole Foods Market nationwide, “eco-activist-runway-model” in New York Fashion Week, and collaborator with top designers on ethical lines.

Erin is an obvious go-getter. So when she was asked by some people why she wasn’t running for the seat in her hometown of Marin County, located within California’s District 2, she thought to herself, “why not?”

“I’m not going to say the notion never crossed my mind, but in a far off, distant manner. Something I do way down the line, when I have the right pedigree and the right career and the right finances and the right image and the right connections, because that’s what we’ve come to expect,” Erin told Marie Claire. “But that’s not what I’d want from an elected official.”

Like most girls who are about to make a big decision, she turned to her bestie for advice. “I talked to friends and mentors, and my best friend said, ‘Yeah, there’s a million reasons why you should wait. But why not run while you wait?'”

At 24, Erin is actually too young to serve in Congress; but luckily, she turns 25 next month, so problem solved. If she wins the race, in which she’ll be running against two middle-aged men, she’ll be the youngest woman ever elected to Congress, and the first woman under 30.

Erin’s campaign has three major tenets: the future of education and work, human rights, and of course, her passion for environmental health, which has allowed her to travel to over 70 countries since she launched Turning Green when she was 13.

Erin told the magazine that, in this day of crazy politics, she knows exactly who she is, and she doesn’t plan to change that for her campaign. “I don’t know what’s to come, but I am aware of my personal values. I have issues that drive me that I will not compromise on. I’m an environmentalist. I’m an activist. I’m a woman. And those identities cannot be stripped away from me.”

As for what drives her, it’s pretty simple. “What can I do? For me, that has been the question I’ve always asked myself: What can I do to respond to injustice?”

No matter what side of the aisle you are on, you’ve got to respect that. Here’s hoping some other politicians follow suit..