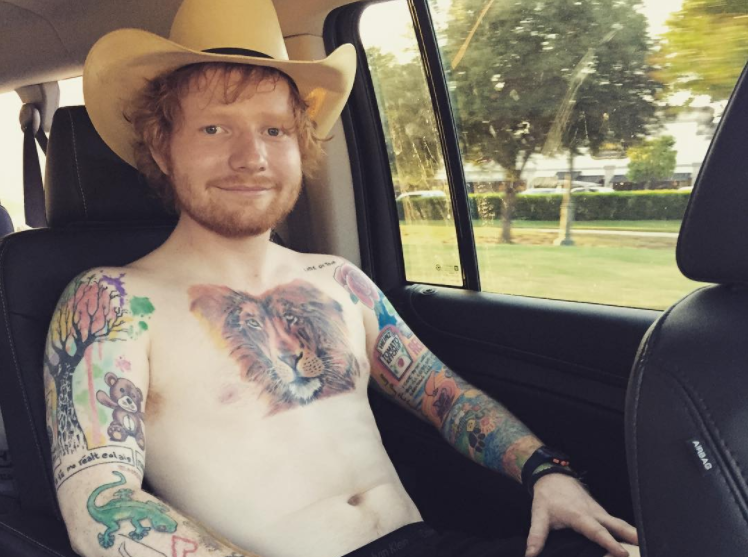 As a worshipper in the House of Hollywood, celebrities are everything. They make even the most mundane activities interesting. That’s because the are beautiful beyond the limits of humanity. There is no way that they aren’t clones. It just doesn’t make sense how they can be so flawless at all hours of the day. No amount of money could ever make me look like they do. And they need to be recognized as societal elite. So why does Ed Sheeran get to come out here and ruin the sanctity of celebrity looking like a stressed out manager of a Best Buy?

Sure, he is talented. He has a nice voice and an ear for music. But so does every troubled high schooler. Which is what I’m assuming he was. His songs are catchy and easy to sing along to in the car, but come ON. You can’t tell me that if he was standing in front of you right now and he was singing one of his sex songs, that you would want to find out if the carpet matches his mangled drapes.

The tattoos. THE TATTOOS. It just. It doesn’t make any sense. That level of ink is reserved for tattoo artists, gang members, and Adam Levine. That’s all I have to say on that subject.

Oh! And another thing! His friendship with T*yl*r Sw*ft is other-worldly. What’s supposed to happen is a guy like Ed is supposed to have a hopeless crush on T*yl*r and she is supposed to reject him with every fiber of her being. Yet another reason that she is an insincere, slithering snake. This bizarro friendship where they were brought together by the “love of music” or whatever makes me want to chop all my hair off and dye it black so I can live as a person who has never had to witness the two of them interacting in any way.

My only explanation for this is that he’s British. It’s possible that they have a different standard for beauty there. And that standard is entirely too low. How are busted British guys regaled as handsome because they have an accent? Prince William isn’t exactly a looker and he’s muhfugging royalty. Not to make this a feminist issue, but the only famous woman from Britain that isn’t a next level babe is Susan Boyle. Among the likes of Emily Blunt, Kate Middleton, Victoria Beckham, Emma Watson, and Kierra Knightly, Susan Boyle sticks out like a sore, hangnailed, infected thumb. So what is it about Ed Sheeran that lets us overlook the fact that he looks like a lazy-eyed possum and focus solely on his talent?

Even when they dress him up or try to pose him in a favorable way, all I see is a shitty red chinstrap. There’s nothing dazzling about him. That seems like it could be part of the appeal, and I could see that. But just for a moment, imagine him naked. You can’t. Your brain won’t allow it. And it shouldn’t. I wouldn’t that wish that upon you. The only reason I suggested it is because I knew your brain would shut down before it would produce such an image.

If Ed Sheeran gets to be famous, then so does every shlubby guy who roams the Earth with an acoustic guitar. Is that what you want? Is that what you really want? You’re thinking, “aww, poor thing. You’re being so harsh on the little guy.” And that’s EXACTLY how he rose to fame. Something about his pitiful face makes you want to cheer him on. But I refuse. I reject Ed Sheeran. I rebuke the fact that he is famous in the name of Yeezus and all that is Hollywood. We deserve better than this..