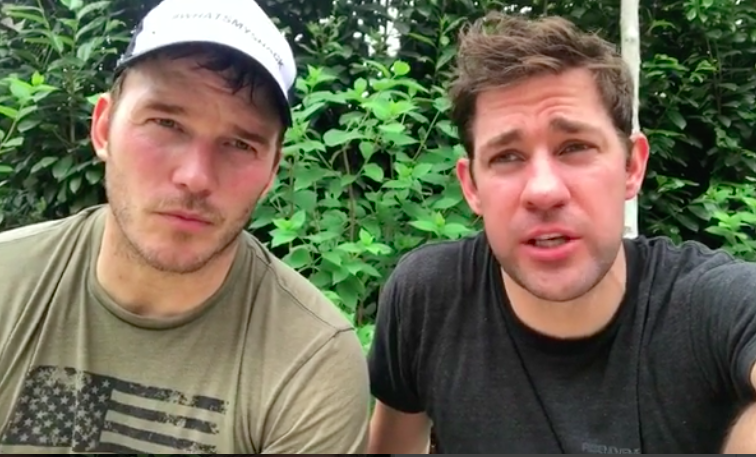 There’s a lot of stuff in this world that divides us. Religion. Politics. Whether you were team Jacob or team Edward. But one thing we can all agree on is that a funny, lovable actor-turned-hot is just about the most wonderful thing that this world can give us.

Both of them started out as somewhat dorky-yet-cute guys who were totally accessible television show crushes. Sure, they were still way out of our leagues. But they were soft and sweet and made us feel like we sort of had a chance. And then? They both got ripped AF. And no matter who we pray to, what party we’re on, or whether we loved vampires or werewolves, we can all agree — we’d all wife either of those men up in half a heartbeat (let’s ignore the fact that they’re both happily married to funny women who are hotter than all of us).

Anyway, I never knew these two men were friends (or at least acquaintances), let alone worked out together until they both posted something on their Instagrams yesterday. As the all-American men that they are, they both decided to take part in The Murph Challenge. This is a physical fitness feat honoring Navy SEAL officer, Michael P. Murphy. “Murph” received the Medal of Honor as well as a Purple Heart for his service to our country. He was killed in 2005 during active duty in Afghanistan.

So, how do you do this challenge? It’s:

Yeah. It sounds like a joke to me because that is physically impossible. But our dream men, who both happened to be in the United Kingdom, decided to honor Murphy as well as all of our fallen veterans yesterday by completing the challenge. As if we didn’t love them enough already.

Today we remember and honor each and every one of the brave men and women who gave their lives for us. #memorialday #murphchallenge @prattprattpratt

#memorialday #murphchallenge @johnkrasinski 1 mile 100 pull-ups 200 push-ups 300 air-squats 1 mile Do it for time. Check out the challenge and get your shirt at https://www.forged.com/ Thank you to all fallen heroes and their families. Today we remember and honor you.

The best part is, Chris Pratt hashtagged #AndyAndJim and Jenna Fischer (who played Pam) liked Jonh’s post and it’s all just really beautiful. Anyway, after doing all of that, the two guys we would always marry in a game of “Fuck, Marry, Kill” have to be sore AF today. So, guys. If you need a rub down, I’ll happily book a last-minute flight to the UK. All you have to do is ask..