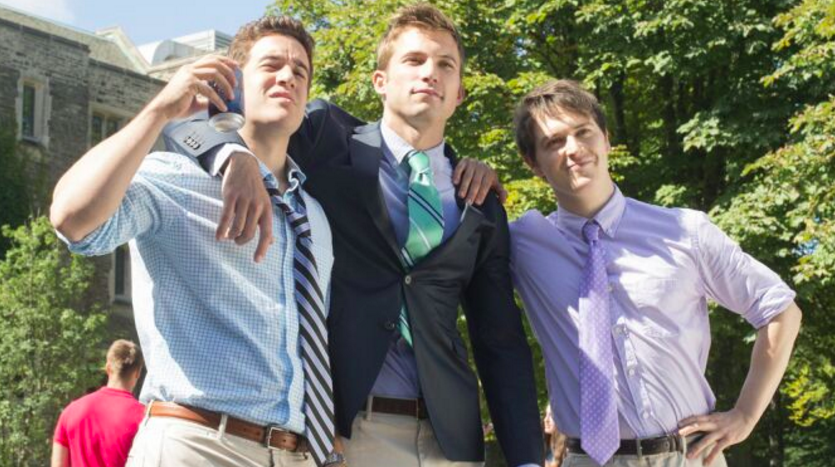 The release of the much anticipated Total Frat Movie is right around the corner and we were so excited to sit down with the stars and ask them a few questions about life, movie-making, and fraternities.

JUSTIN DEELEY (CHARLIE): My brother was in a fraternity, and I had a lot of close friends from high school that were involved in Greek life, so I knew a good deal about them. I didn’t know anyone who had had a bad experience, and my brother had a wonderful time in SAE. I went to the University of Louisville, and my closest friends were in Phi Kappa Tau, and I ran with them quite a bit. So I think on a very surface level I understood what a fraternity provides. The community, the brotherhood, being a part of something that expands well beyond your pledge class, and the chapter at your school… It connects generations. I would say this story has gifted me with a much deeper understanding of all that.

STEVEN YAFFEE (DOUCHENOZZLE): My perception of fraternities was it was just one epic party night after night after night. Though that is true, I didn’t realize the bond the brothers have with each other. These guys are truly family and that was the most interesting thing I learned. That was the main thing that helped me get into the role and understand Frat life. I talked with a guy who was in a frat over thirty years ago. When he sees his old frat brothers, it’s like they haven’t missed a beat. That was something I really admired and loved hearing about.

2. What was the best moment on the set of Total Frat Movie?

ALEX: There are too many to count. However I went out to dinner with Yaffee and Chuckles (Deeley) and Warren, and I proposed that we ball tapped each other on set for fun. It got out of control on the first day so we agreed to only do it on camera. We hit each other’s testicles a lot. Then on, I believe the last day, Warren let’s everyone kick him in the balls. I’m dead serious. He let all these guys kick him and he just stood there and took it like it did nothing. Then I think Yaffee ran up and gave him a good one right in the pills and he doubled over and said, “Ok, that’s enough.”

JUSTIN: Ball Taps. Our director started a game and anytime the camera was rolling, and you were on the camera you could be ball tapped at any moment. The purpose was for a blooper reel originally, and by the end of the shoot, you would be in a scene and literally be thinking “Am I gonna be ball tapped?” It was awesome. Ladies, life advice…guys are weird; we really enjoy hitting each other in the balls. If any guy tells you otherwise he is lying, and you should stay away from him.

STEVEN: There’s a scene in the movie where Charlie (Deeley), Billy (House), and I are yelling insults are really vulgar things across the street at AJ. For about a week leading up to that scene, Alex and I decided we were going to go off script and improvise and come up with the most offside horrific things we could and just keep going until they yelled cut. We literally brainstormed for a week and would go home and write stuff down. When it came to shooting on the day, half of the takes couldn’t be used because either a cast or crewmember fell over from laughter and the shock of what was coming out of our mouths. So I guess we succeeded. One of the things made it into the movie where Billy yells about doing stuff to AJ’s mom and then me talking about an angry pirate…

3. How did you prepare to play this role in the film? Do you share any similarities to your character?

ALEX: It’s funny because going in, I thought “I’m gonna get ripped” I’m in decent shape, but I wanted to get lean. Then I was at a fair the weekend before shooting and there was this funnel cake with Nutella and whipped cream and Reese’s Pieces so I think, “I’m going to eat this whole thing to my face.” I did and it was amazing, then I figured that Billy would not give a fuck about being lean since he drinks so much, so I just ate everything in sight and did curls. It was pretty fun.

JUSTIN: I just sat down everyday and imagined what it would be like to live in this world. Yeah I mean there are similarities to every part I play, its really just about opening that part of myself called Charlie Martin and living in those shoes and feeding my curiosity.

STEVEN: Thankfully I don’t share many similarities with Douchenozzle. He isn’t exactly the sharpest tool in the shed, which made him so much fun to play. He’s sort of a little kid who’s never had any responsibility and just lives in the moment. He’s never really worried about what comes next in life or worried about consequences so that was extremely liberating to play. I had an amazing time creating that character.

4. On a movie set, there is often a lot of downtime. What do you like to do when you’re not filming?

STEVEN: On this movie, the down time was a lot different than on most sets. The mood was always super light and the main cast all got along so well. We would all just chill together all day. I can’t remember why, but we started listening to a lot of Florida Georgia Line. Sometimes I would serenade Justin with it and try to make him feel incredibly uncomfortable. One of the days we did the ALS ice bucket challenge in our downtime. Hair and makeup had to approve it and wouldn’t let us get our heads wet, so we just jumped in a huge container loaded with ice.

ALEX: [I like to] sleep in my trailer or shoot the shit with the guys.

JUSTIN: Man it would be a day party, and go into the night. The location to me isn’t that important. It would just need to have some portion be outside, about 70 degrees out. There would be that slip and slide drinking game tournament I don’t think I would want thousands of people there. But about all my closest friends, also in this fantasy I am 21 years old, But the main event would be a small stage and a guitar where Garth Brooks, George Strait, Travis Tritt, Eric Church would play all day. And of course they would participate in the slip and slide tournament.

ALEX: I’d probably throw a music festival with all my favorite artists there, from the post rock stuff I like to some mosh pit type shit. There would be all you can eat BBQ. With some fancy root beers. (I love root beer).

STEVEN: The most epic place to party is New Orleans. I went down there recently for a buddies’ bachelor party. If I were throwing the ultimate party it would be down there on Bourbon Street. Those people know how to party..