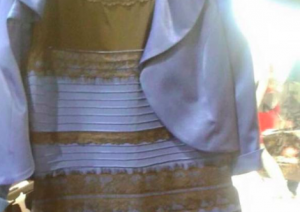 It’s 2015 and the internet is being completely overrun with llamas and dresses.

You know which dress I’m talking about, so I’m not going to waste your time with some lengthy introduction about cones and retinas and low-light eye functionality. That would be a waste of time. The fact of the matter is, this dress is very clearly blue and gold. It is not white and gold. It is not blue and black. If you think I am a wrong, I hate you. This is personal now.

A picture for reference: 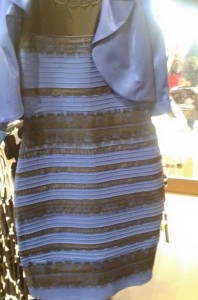 2NOTBrokeGirls: Is “I don’t care” an acceptable comment? Because I don’t get it…

SaltyDog: No one doesn’t care. Everyone cares.

2NOTBrokeGirls: I was too wrapped up in watching the runaway llamas repeatedly to care.

Roger Dorn: As someone who’s colorblind, I’ll sit this one out.

Fratrick Kane 88: This dress is setting race relations back at least a decade.

Lucky Jo: This dress is tearing my friendships apart.

yeahokaywhat: I can’t eat. I can’t work. I can’t stop staring at this fucking dress. I hate myself.

Lucky Jo: But seriously, should I be concerned that my dad thinks the dress is red?

Bacon: Back in my day we only cared what color a dress was if it was covered in semen. cc: @billclinton.

SaltyDog: It’s quite obviously blue and gold. Anyone who is telling you otherwise is a troll.

Veronica: When I blink I see the dress.

Jack Hammer: We let BuzzFeed win again. We as a human species have no standards.

Bogey Wells: It looks like a shitty absorption spectrum. 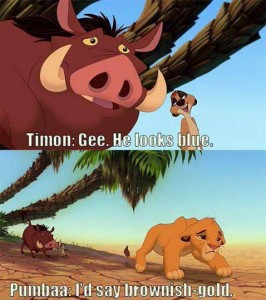 shut up and read: I almost ended my engagement over that damn dress. It’s a life ruiner.

crismontyyyy: If you don’t see blue and black, that’s fine, but you’re wrong and I hate you.

The Boulevard: Put me down as “Don’t care what color it is, it’s an ugly ass dress.”

Babe Lincoln: Nobody wears black and blue together, obviously has to be white and gold.

Babe Lincoln: Also, I just received a company wide email about this, my manager threatened to fire whoever thought it was white and gold so now I’m unemployed apparently: 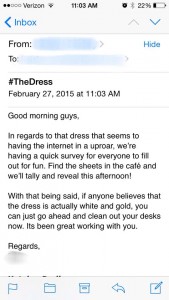 InVinoVeritas: My mom asked me if I was colorblind because I said it was white and gold.

YaGalSal: I legitimately hit my friend who said it was black and blue, so this dress has really forced me to step back and take a long, hard look at my life.

yeahokaywhat: THIS IS A FUCKING DEVIL DRESS.

Hakuna Moscato: Fuck this dress I’ve seen both colors and it’s all about lighting and color perception and who gives a damn what color it is what really needs to be addressed is the fact that SHE DOES NOT LOOK GOOD IN IT WHY DID HER FRIENDS LET HER WEAR THAT.

Hakuna Moscato: Check out that run-on.

yeahokaywhat: If I unfocus my eyes and sort of squint while simultaneously hating myself, I can sort of see blue. But black? LOL BLACK?

BabeLincoln: You have to close one eye and relax the other. Or just close your eyes and just imagine that it’s blue and black to get it that way.

Catie: I tweeted about it last night, but my boyfriend and I were in Home Depot when it started blowing up and some poor employee had to come over and referee the fight. For the record, he agreed with me. The dress is white and gold. And my boyfriend slept on the couch last night.

Babe Lincoln: We all need lives after freaking out about this dress for so long, but, with that being said, IT’S A FUCKING WHITE AND GOLD DRESS, OKAY?

akbrooks17: But what color are the llamas? 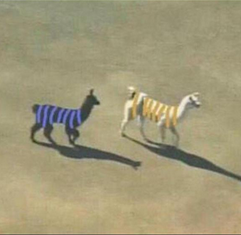 Veronica: I am CONVINCED that I’m smarter than everyone who saw white and gold. #sorryhaters. Like, I couldn’t be deceived.

Babe Lincoln:In all honesty, that dress is the fugliest f-ing thing I’ve ever seen.

Catie: Based off of this thread, I’ve decided who I truly like and whose columns I’m going to start sending straight to the trash. #TeamWhiteAndGold

yeahokaywhat: Can we all just go back to a time when we mutually hated Taylor Swift?

We have no fucking clue.

I like to eat bagels bites in my bed. SnapChat your excellent girl advice and what not to @SDGrandex