Video Comparing Sorority Girls To Cult Members Leaves Us Wondering: Are We Maybe In A Cult? 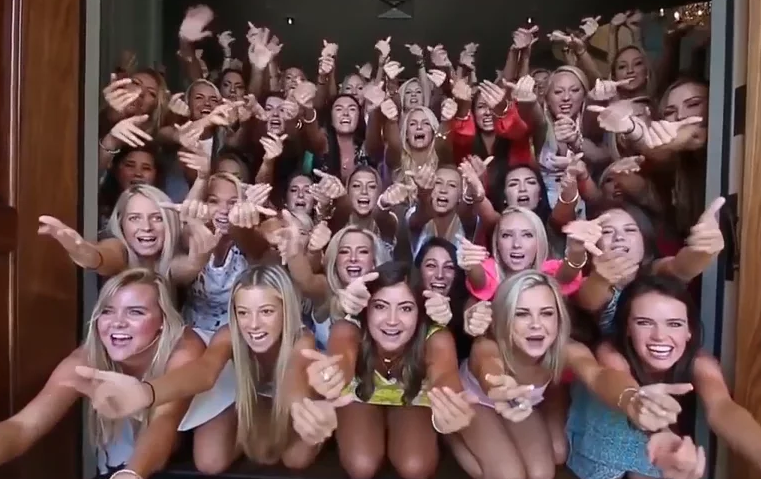 Tale as old as time, or at least as far back as 2007, sororities have been compared to cults. A group of girls in my pledge class actually referred to themselves as “the cult.” It’s funny, because we’re obsessed with our organizations in a non-creepy way, but can acknowledge some of the things that might seem creepy to an outsider. It’s no big deal.

An student named Victoria “Tori” Valentine at Syracuse University made this comparison herself in a semi-creepy, semi-hilarious video as part of a project. She used advice, clips, and music from a really old, really creepy video on how to start a cult, and added in clips from recruitment videos to make her point.

Pause. Are we maybe a fucking cult?

“Start with a prolonged period of love-bombing.”

“Come live with us. Wear these clothes.”

“Encourage members to spy and report on each other.”

That last one hurt. Fuck you, girls who call sisters to standards. You’re the real enemy.

I’m not sure whether the artist intended the video as comedy or as a testament to the psychology behind sororities and/or group think — how any of, in the right circumstances could feasibly be manipulated into a cult — but either way, I could not stop laughing. But I’m the kind of fucked up person who’s made a habit — nay, a career — out of making myself a punchline (and also, the type of person who watched this video and knew that the artist wasn’t actually suggesting sororities were real cults, because I have common sense). A few commenters on Vimeo, however, were REALLY mad about it.

Emily Ann:
This is the most disturbing and fucked up comparison you could ever make to an organization of women trying to form bonds, raise money and awareness, and in the end better themselves as young professionals. I can’t speak for ALL sororities throughout the country, but in my case we were FAR from all this bullshit portrayed. I wouldn’t be the woman I am today without the lessons I had learned and my amazing group of supportive sisters. Hope you enjoyed making a very large group of woman extremely angry and targeted. End rant.

Well, there’s no way to prove you’re in a cult quite like taking a clearly innocuous and exaggerative video to heart, and vehemently defending “the cause” using the exact language the video said cult members use. Way to go.

Valentine responded to some of the comments, but the most conclusive thing she had to say was the following:

I honestly did not expect it to receive so much attention; from one art student to another I’m grateful for your constructive feedback. This was made for a found footage assignment for one of my classes, and I was engrossed in continuing to edit it even after my critique and was actively working on it for the rest of the semester. My concept was to draw parallels between a video by Carey Burtt and a group of recruitment videos I came across on the internet and was not meant to personally offend anyone. I have friends in sororities; my best friend and roommate is in one herself. From what I’ve read it has generated some discussion and has made people think differently, and I couldn’t ask for anything more out of a project. I have no personal agenda against Kappa Delta, or any other sorority or institution, just drawing on connections I saw between youtube videos.

Love the video or hate it, you’ve got to admit, it’s interesting..