Shield your eyes, because what you’re about to see might be viewed as erotica. If you’re viewing this from work, close out now. This image is NSFW. 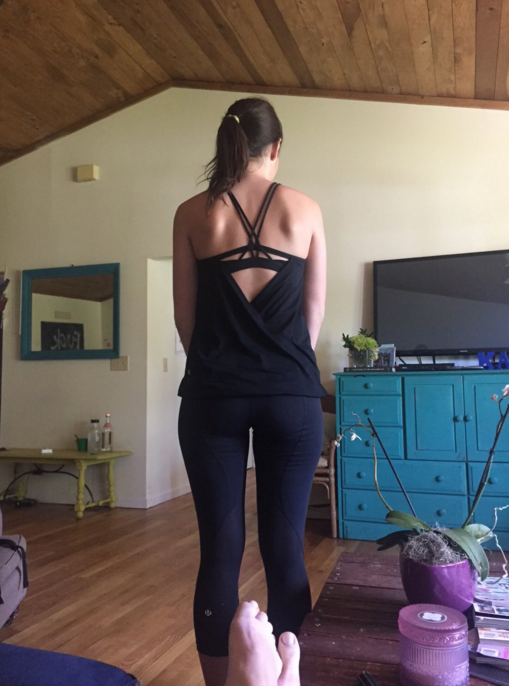 Oh, it’s just a girl in a cute workout top? Carry on.

Aside from the man toes at the bottom, I don’t see a problem with this picture. This looks like something every college-aged woman has worn to the gym (or when she wants to look like she’s going to the gym when really, she’s just going to get some froyo).

Danielle, the girl in the photo, threw on this #basic (but also really cute) workout attire and decided to actually hit the gym. She was just starting her workout when she was interrupted by an employee at the fitness center. I’ll let Danielle take it from here. 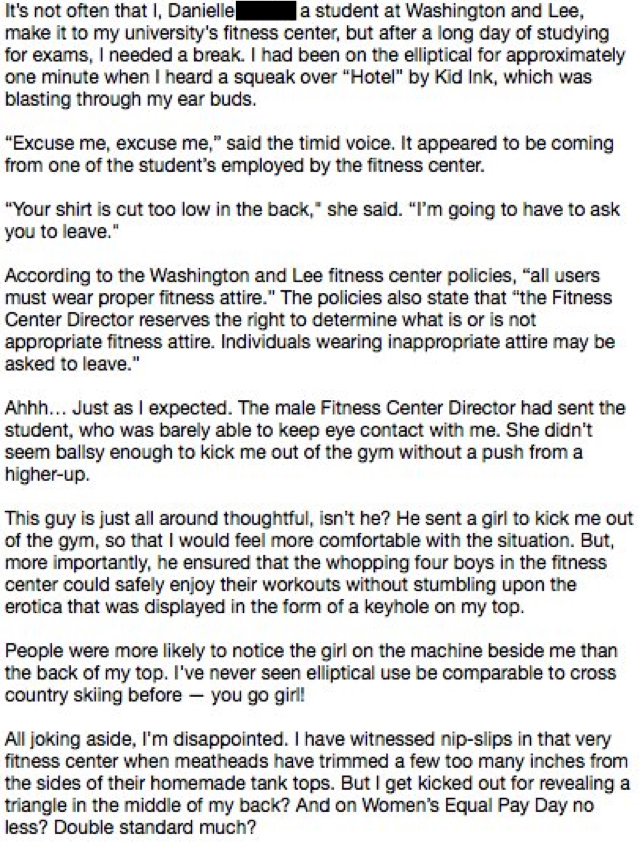 I’ve seen girls at my college rec center doing that sexual ab workout where you thrust your hips into the air in nothing more than a glorified bathing suit, but Danielle’s shirt is too low cut? Okay.

It’s one thing if your cleavage is out there for the world to see during a workout, but Danielle wasn’t doing that. She was kicked out and not allowed to finish her workout because she was showing a very small part of her back. Is that what guys are into these days? Are backs the new butts? Was the sight of Danielle’s three square inches of back so distracting that it was suddenly causing an onslaught of erections at the gym?

TSM talked to Danielle about her experience (BTW her cute top is from lululemon, you’re welcome) and she had the same reaction that I think a lot of us would have.

“Part of me wanted to start a scene — storm into the director’s office and demand to know what was so inappropriate about my top,” she said. “But another part of me was embarrassed. As I left the gym, I had to fight back tears. As I was leaving the gym I bumped into a boy headed there who is known for his revealing tank tops. I wondered if he would be kicked out like I had been.”

I get it. Danielle was just trying to have a good workout, she never even considered that what she was wearing could be interpreted by men (or more specifically, the male fitness center director) as inappropriate. And then she was made to feel bad about it — like she had done something wrong. I don’t know if that boy was kicked out, but I’m going to take a wild guess and say no.

“One student, who babysits for a fitness center employee, told me that said employee told her that this has become a problem at the gym. Additionally, this employee told the student that he cited the image that we girls are creating for ourselves, rather than health reasons, to justify his actions in kicking females out of the gym. I also spoke with a writer for the student newspaper, the Ring Tum Phi, who wrote an article on the subject a few months ago. She told me that she has been sending photos of the outfits that girls have been wearing when they have been kicked out of the gym to the athletic director. She hopes that the fitness center will change their dress code policies, as a result. I sent her my photo to help with the cause.”

I’d be interested to find out what “image” he thinks girls are trying to create for ourselves at the gym. That we work out? That we’re healthy and strong? Yeah, I’m all about that. I’m sure this guy thinks he’s saving the world, no — saving women, by banning certain workout attire from his gym. Maybe once the women are fully clothed and working out in burka’s can the men finally workout in peace and the women can save their “image.”

Danielle shouldn’t be made to feel bad about her top. The fitness center director should feel bad for kicking this woman out of the gym just because her top was too ~sexual~ for him to handle. If you get turned on at the mere sight of a woman’s back, well, that sounds like a personal problem to me.

Oh, and did I mentioned this happened on Equal Pay Day? Glad to see how far we’ve come in terms of gender equality in 2016. Keep up the good work, guys. .