What Your Starbucks Order Says About You 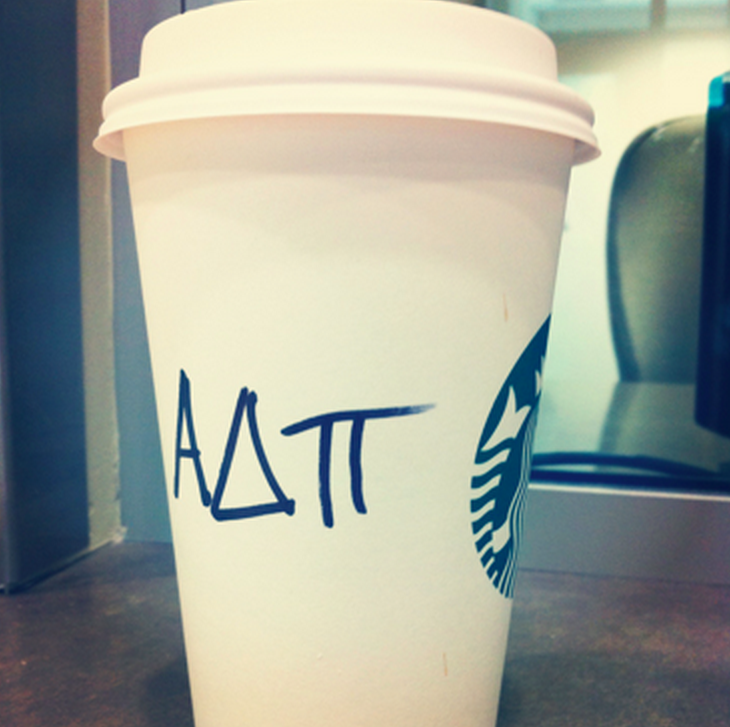 There are few more magical experiences than stepping into my favorite Starbucks first thing in the morning. Something about it manages to fill me up with excitement and wake me up before I’ve even had my first cup. Maybe it’s the smell of the freshly brewed coffee or the sight of the delicious pastries in the display case full of sweet, sweet calories, or maybe it’s the cute barista who sings whatever song is playing in the store to you–you know, the one you flirt with even though you know he’s, like, 35 and trying desperately to be an actor. Whatever, he’s cute, and flirting gets you a free Trenta upgrade. Win-win.

You may not realize it, but what you order at Starbucks is a major reflection on your personality. It’s true! There’ve been studies! By me! Just sitting and watching people at various Starbucks locations around the country for hours on end! Actually, that sounds like too much effort. I only hung out there for, like, three hours because the Barista started singing “How Will I Know” by Whitney Houston and, well, time just slipped away form me. But I digress. In my time as a Starbucks connoisseur, I believe I’ve seen enough to draw a pretty conclusive study about the various drinks that compose your typical ‘Bucks order, and what it says about the drinker.

You are one bold, brash lady. You’re completely no-nonsense. You don’t want anything to stand in the way of your goals, be that milk, sugar, etc., because that shit’s for quitters. You want your caffeine raw while staying lean and mean, and if Starbucks announced it was going to start pumping that shit directly into your veins, you’d be the first person in line like you were waiting for the new iPhone. You’ve most likely been in a fistfight at one point in your life and are itching to get into another one. The taste of the incredibly strong, almost burnt taste fuels your fire for the rest of the day…or at least until your next cup two hours later. You’re probably addicted to it, and you don’t give a shit. Truly the honey badger of the coffee world.

The drink so “crème”-y, it’s in the name twice! If you’re a fan of this chocolate monstrosity (or any of Starbucks’s Frappuccinos) you must not really actually like coffee, because there’s pretty much none in it. You’re more a coffee poser than anything else. It’s, like, 75 percent chocolate, 15 percent mocha, 7 percent whipped cream, and 3 percent coffee. But that’s fine, you do you. You’re a kid at heart and by god, if you want chocolate, you’re gonna get your freaking chocolate. I’ve also noticed that THE skinniest people order this drink, because a grande is more than 400 calories. I’d kill for that kind of metabolism–if I had one of these, my ass wouldn’t stop shaking for about a week.

It doesn’t get more basic than the CM. It’s easily got a larger and more passionate fan base than most NFL teams (looking at you, Jacksonville Jaguars) and some people can’t even function without drinking one. And that’s because it’s FUCKING DELICIOUS. There’s barely any coffee in it (it’s more milk than anything else) but who cares? I don’t know what makes it so good: the vanilla syrup, the steamed milk, the foam, the…uhh…caramel drizzle on the top. Droool. They may as well call it a Caramel Crack-cchiato, because that’s the effect it has on easily susceptible, basic bitches.

I take it back. THIS is the drink of the most basic of basic bitches. Devout PSL drinkers are getting their orders from some kind of hive-mind. I’m not sure who Pumpkin Spice Patient Zero was–maybe it was Alicia Silverstone back when she was a global phenomenon, before her crazy ass started chewing her kid’s food and feeding it to the kid from her mouth. If you’re the type of person who counted down the minutes until August 31 rolled over to September 1 so you could take your Uggs, leggings, sweaters, and Burberry scarf from the tub in your closet, then congrats, the PSL is for you.

Honestly, I don’t think I’ve ever actually looked at the kind of person who orders a Misto. I don’t even really know what they are. The ‘Bucks website says they’re some kind of combination of coffee and steamed milk, and whenever I hear the barista say they’ve got a Soy Misto ready, the person grabs it and runs out of the store before I can get a good look at her. These people are so mysterious in their hooded sweatshirts and tight, skinny jeans. Starbucks says the Misto is “delightfully smooth and perfect for sitting, sipping and contemplating the day.” I must find out more about these mysterious creatures.

The fuck is wrong with you? This isn’t coffee at all! This is a LIE! You’re essentially drinking the result of the branding partnership of the century: Starbucks meets Teavana meets Oprah. Oprah FREAKING Winfrey. While she may be one of the greatest people ever to walk the planet, I don’t really want to drink that. It looks kind of gray and gross. Plus, it’s not coffee. I love tea, but if I want tea, I’ll make it myself with hot water and a teabag worth 25 cents. I’m not about to waste $4 on tea. The only people who order this are people who drink it while reading Oprah’s latest book club book, have been subscribing to O Magazine for longer than their kids have been alive, and just want the queen to sit next to them on a plane and tell them everything is going to be okay.

Seriously? Are you five years old? It’s apple juice with caramel and whipped cream. Get your shit together, unless you actually are five years old, in which case, sorry for cursing at you, but you have no business being in Starbucks. Any parent who lets his or her kid walk into Gymboree with a venti anything may be the worst kind of human being. .