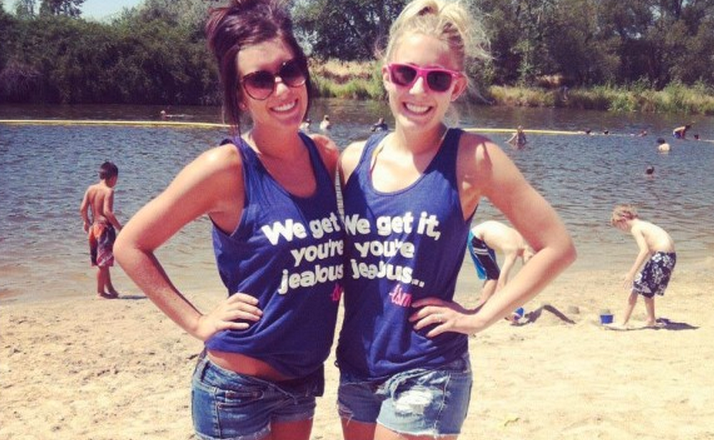 As pretty, young, privileged Americans, we all have one thing in common: a sense of entitlement. We think that by merely existing, we deserve the special treatment we get, and sometimes, we take it for granted. Sometimes, we overestimate ourselves. Sometimes, we think, that regardless of how horrid we act, people will still do what we want them to do. After all, that’s how it goes for the hot girl in movies. She gets her way, because she’s fabulous. It doesn’t matter how wretched she acts. Newsflash, people: that’s not real. Or if it is, it’s not real for us. It’s real for supermodels, and celebrities, not your everyday pretty girl. None know that better than the TSM staff and writers. We decided to share our humiliating tales about when sass has failed us. Maybe you will learn from them, but at the very least, you’ll get a good laugh at our expense.

It was the year after I graduated. I had come off a high — four years of my letters (and/or my boobs) getting boys to do what I wanted, and my whole life of my existence getting my father to do what I wanted. The general expectation was the same: guys were going to do what I wanted, and it was regularly confirmed by my guy friends from home, were the types of young men who never let me drive anywhere (because I’m a horrible driver) or pay for anything if they were nearby, because they didn’t want to be seen in public with a girl who had to reach into her wallet for anything. It was emasculating, they felt, which was wonderful for me.

Sometimes, unfortunately, the guilt would creep up, and I’d sneak away for a “bathroom break” and come back with shots for my boys. On one such occasion, I waited at the bar, and it wasn’t long before a young lad approached me.

“Do you want to take a shot?” he eventually asked.

“I’d love a shot. Your pick. Nothing too hard to take down,” I said, accidentally on purpose adding innuendo.

He ordered us something girly, like a Washington Apple, and as the bartender walked away to gather her materials, he laid it on me:

I laughed, waiting for him to reach for his wallet, but he didn’t. He was serious. This guy expected me to buy my own drink, which would have been fine, if he hadn’t OFFERED TO BUY ME A DRINK. I shot him a dirty look, took out my credit card, then looked directly at the bartender.

“Actually, it’s just going to be one.”

I threw back my shot, and stormed away without looking back. In my drunken fury, I was unable to immediately find my friends (who were exactly where I’d left them), and stormed downstairs, to ensure my bitchy walkoff didn’t end with me by myself in the middle of the dance floor. I texted the guys to come find me, but as I hit send, I looked up to see that my suitor had followed me.

“Please,” he begged. “I’m really sorry. Let me make it up to you. I’ll buy you a drink. Whatever you want.”

Fine, I thought. I’ll do him this favor. He may have the honor of purchasing my next vodka soda, extra lime. Unfortunately, it was too late. I couldn’t view his mishap as an honest mistake. This guy was going to pay…and then he’d endure my bitchery after my beverage was purchased.

My friends came to my rescue, and as soon as they did, I gave the drink-buyer the cold shoulder. He took this to mean my friends were some douchey guys who were trying to steal his lady.

“What is this, the fucking mafia? Back off her.”

“No, sweetie. You don’t get to play the hero right now. They’re here because I don’t want to talk to you any more. Thanks for the drink.”

And then, as I was walking away, laughing with the two guys who’d “saved me” from this probably-nice fellow, something happened. I felt a hand hover over my drink, and just as I was about to turn around and yell at whoever was bumping into me, I realized it was him. He grabbed my drink, and started pulling it out of my hand. I grasped onto the straw and slurped up whatever I could until both the man, and my vodka were gone.

It was a typical Thursday night. I’d guilted a friend into abandoning her studies to drink with me at our favorite bar, so that I could celebrate making it through another week as a barely functioning and only slightly shameful college student. I finished my whiskey coke and tried to make eye contact with the bartender for another, when I felt a tap on my shoulder. I lazily turned my head to meet the intruder, already irritated at the guy for interrupting my train of thought. I was greeted by a lanky stranger with a goofy smile and floppy hair. He actually wasn’t terrible to look at once you got past the fact that he was wearing a t-shirt with a terrible graphic collage of an eagle and an American flag paired with some cheesy caption like, “Land of the Free.”

This guy, without any type of verbal greeting, nodded his head and said, “Can I get you a beer?” Now, I’m not one to judge on outward appearances; yes, his outfit was atrocious, but that wasn’t my main issue. I just happened to be in a horrible mood at the time. I could have just declined and looked away, but no, I had to be a bitch and toy with the situation. Trying to figure out a way to say no without being too much of an asshole, I offered up what I thought was a perfectly sassy response.

“Sorry, I’m gluten-intolerant. So no.”

Clever, right? I thought so. I expected him to accept my obviously dishonest shut down and move on while he still had his dignity. What I never expected was for him to look pleasantly surprised, pull out the stool next to me, plop his hipster ass on the seat and tell me, “No way! Me too!”

I was stuck talking to this guy about his Celiac disease. Not only did I have to listen about his Earth-shattering diagnosis and eventual acceptance, but I had to pretend to know exactly what he was talking about. I was caught in this awkward lie and I couldn’t even do the only thing that would make this conversation bearable — order a cold beer. Eventually I just ordered a pitcher of Boulevard Wheat, partially to passive-aggressively admit my lie to him, but mostly because I was irritated and in dire need of excessive amounts of alcohol. Maybe I’m not actually gluten intolerant, but I’m definitely intolerant of the gluten intolerant.

___
If you’ve got a backfired sass story to share, email it to [email protected] All stories will be made anonymous (or by username per request). Try to keep it under 500 words. Thou shalt not judge lest ye be judged.
***