Why Best Friend Breakups Are Worse Than ACTUAL Breakups 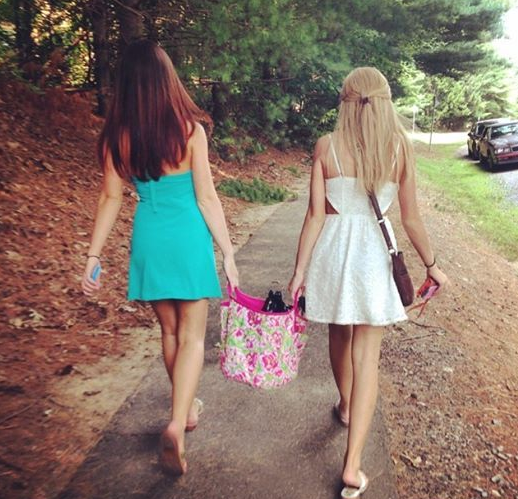 Imagine your best friend. The two of you have been best friends for years. You did everything together: went to school, went on your first date, went on vacations, graduated elementary, middle, and high school together. She got you your first boyfriend, and she was there when two weeks later, he kissed the girl with the biggest boobs in the sixth grade. She was always there when you fought with your parents, siblings, and other friends. She backed you up. She hated the people you hated, and you would have done anything for her. I mean, why not? She was your best friend. You got into trouble together, and you were there for each other through the ups and the downs. You were literally inseparable for YEARS. It’s a tale as old as time.

Except this tale takes a dark turn: you go off to college and everything is fine, until one day, she decides she doesn’t need you anymore. She tells you exactly what she thinks is wrong with you. And then she walks out of your life forever. You’re now facing the dreaded best friend breakup. And guess what? It hurts. It hurts more than any boy will ever hurt you. You’ll cry, you’ll be angry, you’ll throw things. She and her new friends will subtweet and you’ll cry and be angry and throw even more things. And that’s okay. Wallow in your self-pity, cry until your little heart can’t take it anymore, and then cry some more.

The truth is, it’s supposed to hurt. This girl wasn’t just some guy who you dated for a few months, or some pictures you can burn and memories you can put away in a box. She was your BEST FRIEND. Any good memory you have about growing up? She’s in it. Who could forget the time you slid down the stairs on pillows? (She hit a wall.) What about the time you jumped off a balcony together in Tennessee, for God only knows what reason? If you have a happy memory, she’s in it. Hell, growing up, you probably spent just as much time at her house as you did your own. She was a huge player in every part of your life. She helped you decide where you wanted to go to school, and she pushed you to major in your dream area rather than a practical one. She changed your life.

And now? Now is the hard part. Because now you’re going to have to pretend that it doesn’t bother you. Her life is going to start changing in big ways. She’ll graduate college. Get engaged. Move on with her life. And like the shamed ex-girlfriend of the guy who trades up, you’ll Facebook and Twitter stalk her, and you’ll look at her engagement photos, and you’ll cry over a wedding that you were supposed to be in that now you won’t even be invited to. You’re going to miss her baby shower and the moment when she finally lands her dream job. (The one that you always knew she could do, anyway.) You’re going to have to be the parents from Hercules and watch your baby grow up from afar. And you’re going to be happy for her: for landing her dream guy, her dream job, and for finally being happy. But you’re going to be sad, because whenever you imagined these moments in the past, you were always there.

But I have some more news for you: she’s missing out, too. She won’t get to see you break up with the guy she always said was all wrong for you. She won’t get to watch you find someone you think might actually be “the one.” She’ll miss your college graduation. Your wedding. Your baby shower. She’ll miss out on watching you achieve your dreams. She’s not going to see you be the person she always pushed you to be. She’ll miss out on watching you grow up, too.

And in the end, she’ll be just like that ex who you thought you would never get over. It’ll always hurt, but eventually you’ll think about it a little less. You’ll be able to laugh at the good times you had without being upset over the bad. You’ll move on with your life, and she’ll be just another notch in your best friend bedpost.