Why E-Board Hates You And How To Make A Change 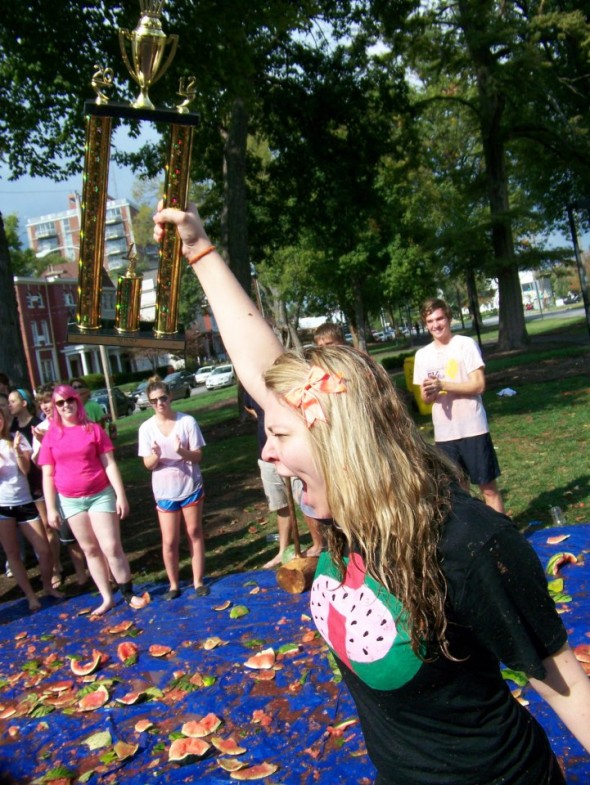 Alright, so there’s a slight chance I may have exaggerated in the title just to get you interested enough to open this article, but if you’re on your chapter’s exec board, you’ll know what I’m talking about. If you’re not, you will by the end of this.

I think the best way to start this out is by asking you to take a look at yourself within your chapter. Are you one of the girls that has an insane amount of free time for whatever reason and signs up to participate in every philanthropy event available? Or are you one of the more quiet ones that just sort of sits back and watches everyone else? That’s not to say that everyone falls into these two categories. There’s a happy medium: you sign up for the things that you’re legitimately good at, but only when you have time. It’s not like anyone expects you to do everything all the time. If you’re one of those girls, there’s really nothing wrong with you, but as for everyone else…

There’s nothing wrong with being enthusiastic and gung-ho about philanthropy or whatever other events your chapter participates in, but sit back and think for a minute. Regardless of the event, in an ideal situation your sorority would win, right? Nod your head because you agree with me, since no Olympian enters an event thinking to herself fifth place would be cool. Now look at yourself. Should you be signing up for this? Are you really the best person in the chapter to be doing whatever you’re doing, or are you just taking up a spot that should be filled by someone who’s better at the task at hand? I’ll give you an example.

An Alpha Rho named Molly signed up for the kickball tournament hosted by Zeta Beta fraternity. Golly gee, she’s so excited to meet all the Zeta Beta boys and hopefully make some good connections between ΑΡ and ΖΒ! There’s only 10 people to a team, so she made sure to sign up quickly. On the day of the tournament, Molly and her sisters meet early at the chapter house, then head over together. Molly is really excited, but only plays when her team is in the outfield because she has no legs. This is not a euphemism for something. She literally didn’t have legs. This obviously cost her teammates the game. Everyone was pissed, but smiled through their teeth under the guise of sisterhood. It sure was a super fun day spent with her sisters!

Can we all agree that Molly should not have signed up for the team and let someone that had legs sign up instead? This applies to EVERYONE. If there’s a world champion kickball player in your chapter and she’s standing behind you waiting to sign up for the tournament, and there’s only one spot left…get out of her way. You are not a special snowflake. You are not good at everything. Move. There’s nothing wrong with enthusiasm, just channel it into places where it’s not a waste.

I know there are girls reading this thinking to themselves Wow, not everything is about winning. What about sisterhood? This girl is warped. That’s fine. But don’t most of these events donate money to your philanthropy if you win? And after you win (or at least place) doesn’t everyone feel a sense of pride in the chapter? Go ahead and roll your eyes, but don’t you dare tell me I’m wrong about those last two points, because I’m not. Sisterhood is great and all, but if the amount of money you raise for your philanthropy isn’t anything special, maybe you should think about how proactive your chapter is being about events besides your own. Speaking about being proactive…

I don’t know if it’s because these people lack any sort of excitement towards anything or if it’s because they are honestly good at nothing in life, but they fall under the “filler” category in the chapter. Think about everyone in the chapter. Everyone. Now stop after it’s been about three minutes or so. If you couldn’t think of someone’s name, they’re probably filler. Filler girls fall under two subcategories:

Some people just don’t like doing things. Not gonna lie, if it’s between going for a hike or watching the SVU marathon on TV, you’ll find me hangin’ out with Ice-T on the couch, but some of these girls are legitimately good at things! Some of these girls paint like Picasso, run like the wind, and don’t give two shits about diving into dirt just to pull a belt off a hip during flag football. But they don’t sign up. They don’t do anything.

If you’re one of these people and you know you have something more to contribute to your chapter, you sure as shit better start pulling your own weight. The fillers can get away with being useless, because hey, you gotta hit campus total somehow, but you were recruited for reasons other than numbers. These girls are the bane of your chapter leaders’ existences, because there’s so much potential, but not a shit given in the world. Occasionally, someone will walk up to one of these girls and flat out say “Look, you need to do this or else we’ll get boned,” but it doesn’t happen nearly as often as it should. If you don’t care, if you don’t have any interest in doing things with other people, then why are you here? Why did you stress how you were an all-state track champion in high school during recruitment and then decline to sign up for anything revolving around athletics? And if you’re sitting there thinking Fuck you Martinson. I do care, then go out and show it, because all the girls who couldn’t think of your name in three minutes clearly don’t know that.

As for the second type of uninvolved girl, well, this is a bit of a sad situation. Let’s go back to Molly, who stupidly signed up for kickball despite her physical handicap. In addition to being crippled, Molly can’t paint, can’t sing, can’t write, can’t really do anything other than talk and smile.

And that’s all she has to do.

If you’re not good at anything, don’t try to prove to people you are. It won’t work, because, well, you’re not good at anything (duh). Your only job is to be good PR for the chapter. That’s your single most useful contribution, getting up in the morning, doing your hair AND makeup, and walking out the door looking like a million bucks. Being a good sister is a good contribution too, but I feel like that’s a given, but too many girls think it’s enough. They think sisterhood is all their chapter requires of them, and this is false. Do you know how infuriating it is to get up an hour early to look good on a day you’re wearing letters, just to pass by someone else in your very own chapter who isn’t even wearing foundation to offset her messy bun? You might think it doesn’t matter, and that since you’re a great friend/sister/whatever that it negates the fact that you’re too lazy to get dressed properly, but how many people outside your chapter know you’re loyal, friendly, and faithful? Not nearly as many as see you walk around looking like butthole. So when you walk around looking like a dumpster in letters, you’re promoting the idea that your chapter is full of the gross girls instead of beautiful and confident women. You can’t see sisterhood on the outside, and the quicker you fully accept that the better recruitment your chapter will have.

Since I’m not stupid and I can already hear the people about to say “WOW not EVERYTHING is about image you self-righteous bitch,” shut your mouth before you even open it. I don’t know what kind of world you’re living in, but it’s not reality. Image is everything, if not at least a giant chunk of it. In an ideal world, every fraternity would mix with every sorority, regardless of how “hot” the organization is. This does not happen. You know this does not happen. And you can go ahead and argue that parties don’t matter, that sisterhood and friendship reigns supreme as you channel your inner Care Bare or whateverthefuck, but take a second and ask yourself what chapters participated in your most recent philanthropy event. We all know that not every chapter can do every single philanthropy on campus since there’s usually an entrance fee and whatnot and money doesn’t grow on trees, but when was the last time a “hot shit” chapter did yours (assuming you’re not hot shit yourself)? I’m sorry, but at least where I’m from, if you’re bottom of the barrel not only does your social life suffer, but so does your philanthropy.

Everyone knows that Greeks are held to a higher standard than any other organization on campus, and it’s not fair. It just isn’t. It’s not an ideal world, and it’s not an ideal system. People aren’t perfect and many will never fully embody the values your chapter stands for. I wouldn’t even have anything to write if things within Greek Life like rank, tiers, and image weren’t such a big deal to so many people. You can ignore this article if you want, or you can at least take some of it to heart and maybe improve your chapter, your recruitment, your philanthropy, and yourself, because if you go through life thinking you’re hot shit and that you fart rainbows and perfection, it’s going to be a rough, delusional ride.