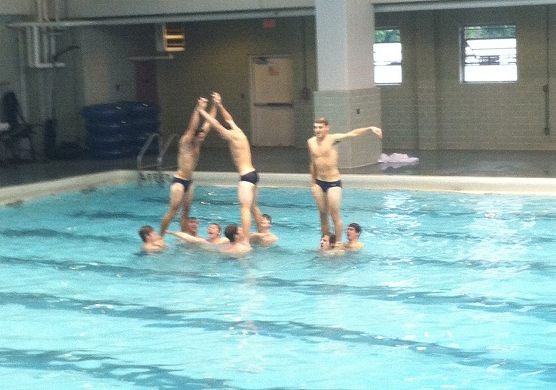 Butts. We’ve all got them. But apparently the Women Of Water Polo And Coaches (WOWPAC) are not cool with that. They put actual time, money, and effort into making a video about wedgies that they have released are planning to play at the Women’s Water Polo summit.

First off, was this made using PowerPoint 2001? Seriously, my 7-year-old cousin could vomit on iMovie and still make a better quality video than this. Someone watched this video and said, “yeah this is good, let’s have the world watch this.” That person needs to be fired immediately along with the nasally robot woman who voiced this piece of shit.

Second, I’d like to say WOWPAC, that was a valiant attempt of covering your ass by adding the male butt cracks, but this was obviously only about women. Water polo is a sport where you are constantly move your legs, and it is inevitable for your suit to go up your butt. I would like to reiterate that every human has a butt. This minimal exposure is something that is not going to detract from the sport unless you point it out in a negative way. Which is exactly what this video does.

And another thing. This is perpetuating our culture’s “you were asking for it” mindset. If a coach says something creepy about your butt, it’s because your coach is creepy, not because you didn’t fix your wedgie. This video is drawing attention to a minuscule problem instead of trying to advance women in sports. Instead of focusing on the sport, you have wasted your money and four minutes of my life talking about something that 4th graders worry about getting along with Wet Willies and Swirlies. For a committee claiming to represent and support women water polo athletes, this is just pitiful. Not only will adult athletes be seeing this, but so will young girls. We need to teach them about how strong their bodies are and to be proud of what it can do, not be ashamed of what it looks like.

WOWPAC, pull your head out of your ass. It’s messing up your suit.