I’m not sure that I would recommend starting college with a relationship. I did it, and it was definitely fun, but it’s not the most logical time to be tied down. College is about growing and changing and making stupid mistakes with the guy who sits next to you in Meteorology. It’s not fun watching all your friends go crazy while you’re glued to your phone, assuring your boyfriend that you aren’t going to cheat on him.

If you are going to go to college already in a relationship, make sure it’s not with this guy. This guy fucking sucks. Everybody has dated at least one crazy, controlling asshole– but this dude has so many deep-seated issues, it would take an entire team of psychologists to find the root of his insecurities. It’s one thing to check on your girlfriend and make sure she knows you care, but this guy takes his umbrella of influence and attempts to stretch it farther than any human should: 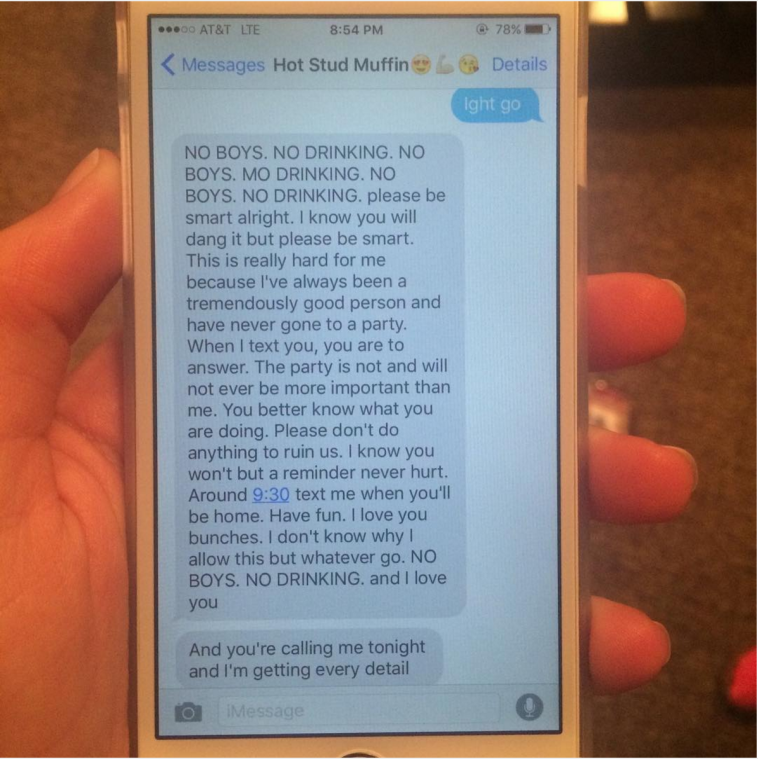 “This is really hard for me because I’ve always been a tremendously good person and have never gone to a party.”

Look, skipper, I don’t care what your mom has been telling you for the past 18 years; you are most certainly not a “tremendously good person,” and telling people that you are makes you look like a real dweeb.

Not to mention, avoiding parties and being a good person are not synonymous. I might venture a guess that you’ve never actually been invited to a party, so you should probably keep that little tidbit of information to yourself. Shit’s embarrassing.

“When I text you, you are to answer.”

This is where I would exit the relationship. You are to answer. Who the fuck does this guy think he is?

“The party is not and will not ever be more important than me.”

The party is and will always be more important than you, fucking nerd.

“I don’t know why I allow this but whatever go.”

I don’t know why your mother allows you to be such a controlling piece of shit, son. Do less.

I don’t know who the chick on the receiving end of this text is, but if you’re reading this: for the love of God, dump this man. Do it for me, yourself, and women everywhere. This guy could shit fairy dust and have a cotton candy-flavored dick, and I would still think he’s the most pathetic excuse of a boyfriend in existence. No one needs to have some insecure little dickstain telling them what to do, and an entire semester of this kind of surveillance would probably kill a person. Get. Out. Now..