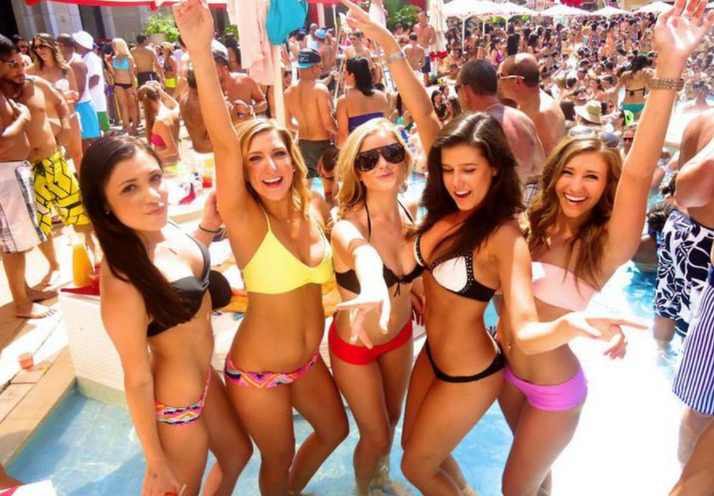 Once upon a time, being basic was considered an insult. We’d hide our Stabs, forgo our infinity scarves, and act like we’re not planning our Halloween costumes while it’s still 100 degrees outside (on that note, does anyone else already know what they’re going to be this year?). Then, sometime last year, all the basic bitches in the world got together, decided to team up, and collectively say “fuck it.”

And now, being basic is fine. It’s so fine, in fact, that we completely embrace it. We post pumpkin emojis on September 1st and we Instagram our coffee like Starbucks is paying us. But the real reason we’re all painfully basic isn’t because coffee is so good or Halloween is so great (they are though, just saying). It’s because our own parents gave us basic ass names and assumed we’d be fine.

So, if you have one of the common names below, just be cool. I know it was hard growing up with three other Megans in class, but it’s not your fault. You can’t help that you love Chipotle and plan your whole year around Coachella. It’s just who you are.

Alex: Whether she was Alexandra, Alexis, or Alexa, choosing the be just “Alex” is a strong move made by strong women. These gals aren’t to be messed with. No matter what they want, whether it’s a position on exec, a position with a man, or a position at their dream jobs, Alexes have all of the tools to get it done. No, they’re not always the most glamorous, but what they lack in false eyelashes and chokers, they make up for with the ability to get shit done and shot straight liquor back.

Morgan: Whether she majored in art, or her artistic talents are better used on Instagram, the Morgans of the world tend to see life just a little bit differently than the rest of us. Odds are, Morgans go to the gym for health reasons, instead of just trying to look hot, and their aesthetic is perfect because they actually go to amazing places instead of just pretending to be cool. Her hair is most likely gorgeous because she takes a ton of vitamins, her teeth are white because she doesn’t drink 74 coffees a day, and her personality is dazzling because she’s just plain happy. You lowkey want to hate her, but it’s hard when everything about her is so damn beautiful.

Nicole: If she’s not Italian and doesn’t talk about how Italian she is, she’s not truly a Nicole.

“Kat”: Whether she has big tits or just a big personality, the self-proclaimed Kats of the world want to see and be seen. At this point, she has a standing appointment at standards, but considering she gets everyone into the best parties, exec isn’t going to stop her anytime soon. Sure, she tends to always snag the spotlight but when it comes down to it, being by Kat’s side is way better than being her enemy. She knows far too many people to cross.

Charlotte: Mostly sweet and just a little bit sassy, Charlottes tend to be exactly what you’d imagine. Brunette, beautiful, and just a little bit reserved. No, she’s not always the life of the party, but when she comes out of her shell, she easily puts everyone else to shame. Don’t feel bad though. You know what they say, be a Charlotte in the street, end up hella rich married to a super sweet lawyer who drives you wild in the sheets. Or something like that.

Vanessa: If Vanessas aren’t born rich, it’s usually their life mission to become it. With perfectly manicured nails and an even more perfectly manicured life, she’s not above calling a guy “daddy” to snag a credit card from his wallet. The fact that values friendships above everything else means you get to reap a lot of the benefits. Don’t worry — drinks are almost *always* on her.

Natalie: The first girl of the group to agree to go on the hike, jump out of a plane, or go *gulp* camping, Natalies might actually like the outdoors. Sure, everyone says they love a good adventure and have ~wanderlust~ in their bones, but with Natalie, well, it might just be true. If her passport doesn’t make you dizzy, her Instagram feed is sure to, thanks to the plethora of new people and places filling each and every screen.

Hannah: The combination of bossy and brainy makes every Hannah a force to be reconded with. Whether you keep her around for her sound advice, her array of strange facts she always seems to pull out of her ass, or the color coded and perfectly organized notes she takes for every class, Hannah can always be counted on to help you raise your standards and your GPA. Sure, her alcohol tolerance might not be the best and she’s usually the one reminding you to chug water before bed but let’s be real, Hannahs have made all of our lives, and hangovers, much more tolerable.

Anna: The slyest bitches of them all, Annas know how to play any and all situations and people. With her naturally pretty face, nice hair, and decent ass, Annas can convince almost anyone to give her her way. No, she’s not outright mean and manipulative, but when you strip away her good looks and charming personality, you’ll realize just how calculating she is. Don’t be shocked when she gets everything she ever wanted in life — just take notes.

Kim: Once upon a time, Kims could be whoever they wanted to be. Now though, any girl named Kim has royalty to compete with. If she’s not considered the queen of contouring in her friend group, her friend group is most likely wondering why they keep her around in the first place. I’m not saying she has to be hot, but I’m also not not saying that, you know?

Megan: If Megan doesn’t own an apron, a pearl necklace, and a phone filled with boys’ hearts she’s broken, then she’s a liar. You might think the fact that she always looks put together and that her baked goods make you want to swear off Pure Barre forever and live solely in her kitchen means she’s better than you. And that might just be right. Take a look at the guys she’s dated in the past, accept defeat, and named your daughter Megan the second you conceive. Better luck next generation.

Lilly: She’ll probably be your best friend in elementary school and then get a new best friend in third grade and decide to switch schools to be with her even though you’re staying at your old school. Then, at her birthday party, her new best friend will give her BFF necklaces and you’ll cry and to comfort you, Lilly will say “you’re still my best friend at Fruitville.” No? Just me. Whatever. Lilly’s are fine. Probably bitches though, tbh.

Amanda: Guess Amanda’s favorite place to get coffee? Starbucks! Guess her favorite season? Fall! Guess her favorite food? Pizza! Sure, Amandas tend to gravitate toward all things basic. She wears her free red one-piece with pride and she complains about how fat she is while Snapchatting herself eating a red velvet cupcake and watching Netflix. No, she’s not the most original. But when she gets 500+ likes on Instagram and makes being basic look so good, can you really blame her?

Rebecca: Becca or Becks, this girl always keeps you on your toes. She’s not one to back down from a challenge or a shot, so more often than not you find yourself yelling at her to get off a table, get away from a guy, or put down the vodka. Still, when you watch her ballsy ass in action, you can’t help but wish you were just a little more like her.

Danielle: The girl who made bitch face mainstream, Danielles are the must-have friend in the group who will never, ever accept any shit. While you’re actually a little scared of her 99 percent of the time, she makes up for it by the fact that she’s always down for a good time and always insists on having another round before ending the night. No, you can never tell if she’s having fun thanks to her outward demeanor, but inside you truly know she cares. I mean, I think so anyway.

Mary: Mary bakes cookies. Mary goes to philanthropy events even if they’re not required. Mary smiles at people, even when they’re being annoying and even when she’s hungover. Don’t be fooled by her virginal names and generally goody two shoes personality — when the lights go down and the Jesus juice comes out, Mary’s going to get on her knees for a little bit more than just her prayers.

Laura/Lauren: 10/10 times Laura/Laurens are pretty, brunette (even if she dyed it blonde, her roots don’t lie), and just the perfect amount of bitchy. Hate her all you want for getting into a better university than you, but come graduation just remember: none of us are above kissing some ass for a great job. And Laur(en)a? She’s going to be handing out the great jobs. Did I mention she’s a bitch?

Christina: Her demeanor is just as sharp as her perfected wing eyeliner, and one stare from her does more than 47 drunken texts you send the guy who broke your heart could ever do. Get out of her way or crumble in her wake — she doesn’t mess around on her ride to the top. Don’t worry — you’re not the first person she’s made cry. Today..