Am I Supposed To Be Excited To Graduate? Because I’m Terrified 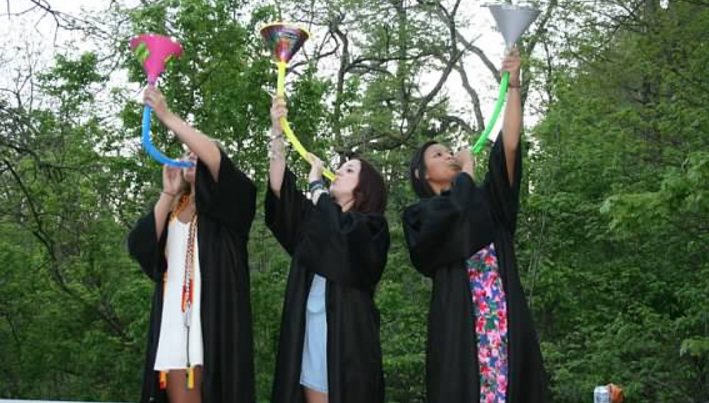 My first clue that maybe I wasn’t *as* excited to graduate as I thought was when I missed my graduation application deadline. That was a pretty glaring indication, if I’m being honest. Luckily, it’s a mere $15 late processing fine. But that was also my second indication that I wasn’t ready. I felt tinge of disappointment as I paid the fee, registered to walk for spring graduation, and deleted my mentally prepared, potential fall 2018 class schedule. One more bullshit semester taking wine tasting and yoga went from simply making the best of a bad situation, to being something I was secretly longing to do.

I hate being asked what I am doing next year. I hate that most, as in at least 80%, of my closest friends are taking a victory lap, and I was supposed to leave them behind. I hate that when I made the decision to stay an extra year, I was met with judgment. “Don’t you think you’ll be sick of the college culture?” “Don’t you think it’ll make you feel old?” “You do know you can’t get blacked out on Tuesdays if you’re working full time, right?” The most annoying part is that most of the people asking these questions were on their fifth or sixth year themselves, but somehow I was shamed for finishing in four. I was the nerd who did what we all try to convince our parents to be “impossible” in hopes that they’ll fund another year. Except that failing to finish all of your credit hours in four years is acceptable, just staying behind to be with friends is not.

What people fail to realize is that post grad life is more than just the responsibility of a full time job. It’s also not being within walking distance of 150 of your closest friends. Post grad life is coming home with drama like “my boss is a jerk, but I need this job to literally survive on this earth” and not “he slept with that girl I hate.” It’s summer loneliness but, like, for the rest of your life. It’s also bills. Do you know how much money I have in my bank account right now? Like, -$300. And that’s with a prepaid dining hall and dollar shots night. Do you know what I did yesterday? Bought my 4th Halloween costume for this year. Oh, and a new pair of booties even though my shoe holder is overflowing.

The thought of continuing into the “real world” when I’m still this fiscally irresponsible is downright horrifying. I know I sound like a brat, but it’s the truth. As much as I am an Independent Woman™, I rely on my parents for pretty much everything. Sure, I pay for a lot of things on my own, but it’s not even the tip of the iceberg. Real life bills aren’t just rent and utilities, it’s also car insurance, oil changes, pet insurance, phone bills, medical copays, renters insurance, etc. So much that it gives me a headache. Oh, and I’m just supposed to, like, management that.

Not to mention, at what age are you supposed to stop rolling your eyes at your old-fashioned grandmother for asking when you’re going to settle down and get married? Should I start taking her words seriously yet? Or in five years? Holy shit, should finding a person to get actual, real life married to be in my five-year plan? As in not even marrying the person, but finding him/her and not completely fucking it up like I had with every other relationship in my past? The only guy I’ve had sex with this semester is a 30-year-old named “Bartender Eric” and I’m not even sure that he has a last name. Whatever track I am “supposed” to be on, I don’t think I’ll get there any time soon. Right now that’s okay because I’m in college, but what about when I no longer have that excuse?

Working out is another big concern. As I am right now, I can work out once or twice a semester and still look decent naked. That is with a diet of hard alcohol five times a week and a daily burrito. Logically, I know that it is smarter to change my diet now, so that it’s easier when my metabolism goes to shit. But the kid in me refuses to give up Takis for carrots and hummus before I have to. Right now is the easiest time of my life to have a the body of a GD Instagram model, and I know I could achieve it with such minimal effort, and I can’t even do that. Is there any hope for the future?

Once again, I get it. All of these problems could easily be solved by me putting on my big girl panties and acting like an adult. But that’s the entire point. I am terrified of adult life. Don’t get me wrong, I know I will make it my bitch. I know I will have a dope time and make new friends and keep the important friends I have now. But also, I really can’t get over the fact that I’m going to have to pay my own phone bill..