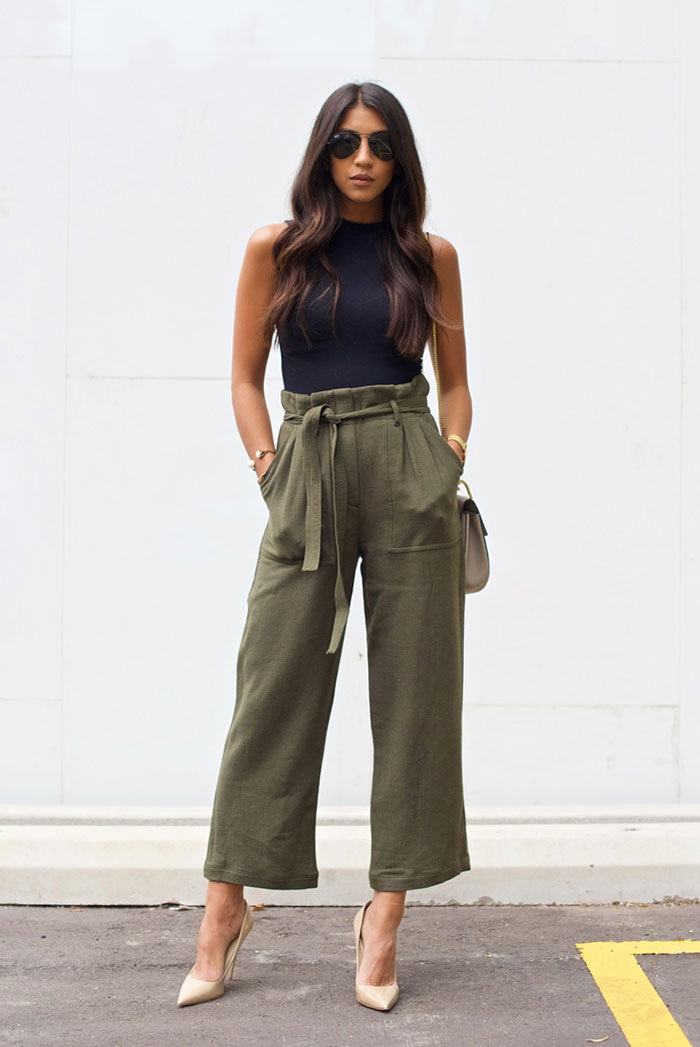 I distinctly remember the first time I cared about my pants. I was in middle school (obviously), and seemingly overnight, skinny jeans became the single most important thing in every hormonal teen’s life. I tried on pair after pair that hugged my then non-existent ass (LOL remember what it was like being a size 2?) that felt as though they were cutting off circulation in at least three areas of my legs, as I pleaded with my mother that these were my only, foolproof way to become popular (spoiler: they were not).

Ten years later, and we have finally seen the light with culottes. After a long decade of pulling, stretching, and suffering in pants that were sometimes so tight you would literally give up your first born to get out of them, the rule of skinny pants are over.

In case you’ve been living under a rock, or don’t have an Instagram account, culottes are a style of pant that generally fit your waist and butt, but flare around the legs, that are often made in a stretchy, flowy, or at least comfortable material. You can pair them with literally anything — from a button up shirt to just a bra, and somehow manage to always look like you know something about fashion.

They’re revolutionary. We have somehow managed to find a trend that makes us collectively look more fashionable, while becoming more comfortable. It’s as if we’re rewarding women for not only the past decade of wearing constricting pants, but every single fashion trend: heels, corsets, g-strings, and pantyhose, that I have a sneaking suspicion were designed just to hurt us. While I’m not sure if I’m ready to forgive society yet, for the years of surviving the harsh Canadian winters in heels and a fucking skirt, the only outfit deemed appropriate to “get into the bar”, it’s definitely a start.

Culottes may be indicative of a brighter future ahead. Sure, we might still be decades away from dressing as disgusting as men, but it shows that we can survive in society while being comfortable, without looking like a hungover mess in sweatpants. It also marks a step in the right direction, because it allows for women to be seen as professional, sexy, stylish, or whatever TF you want to come across as, without showing every nook and cranny of your body, which is huge. Since I’m nearing the end of my undergraduate degree, I’d started to become highly concerned with how I was going to dress in a professional setting. See, I want nothing more than to give off that “bitch in charge” vibe, but if television, and television characters are any indication, the best, and only, way to get this look is to own a ton of skin-tight pencil skirts, point-y stilettos and have a great ass. I have to admit, on more than one occasion, I’ve extensively wondered how I was going to pull off wearing a pencil skirt every day. What if I ate pizza the night before? What if I had my period? What if I was just tired of being uncomfortable AF at work every day?

Now, I’m not here to say that culottes are here to solve every problem in the world, but they did just solve my fear of not being able to eventually look like an icy bitch at work due to the fact that I bloat whenever it is most inconvenient.

While we’re not even two weeks into 2018, and there are already indications that all of our problems did not magically disappear when the ball dropped on NYE, culottes might be our saving grace. If I’m going to have to deal with political turmoil, global warming, the world falling apart, and, most importantly, my GD bloating, I may as well be comfortable doing it..