How To Go Clubbing, If You Hate Clubbing 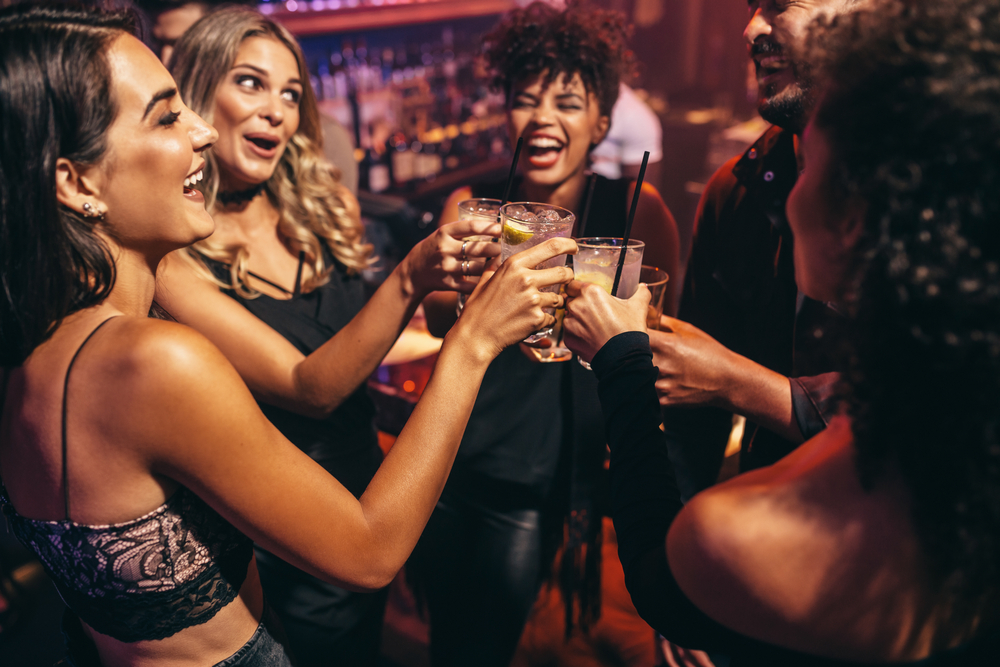 This is a safe space, so I’m just going to say it: clubbing sucks. Back when I was a freshman, sure, it was kind of exciting. The rush of using your fake ID to get past a bouncer (who really didn’t give AF if you knew how to spell your street name backwards), and dancing with guys in a way that wasn’t allowed at high school dances, in a skirt that would have made your mother’s head twist all the way around, is all very exciting. However, soon the novelty wears off, and by soon, I mean the second you realize that you don’t actually enjoy spending hours getting ready, just to be grinded on by some dude who’s doing his eighth year of undergrad until you sweat off all of your expertly applied makeup, that you’re not even able to fix because you feel uncomfortable being so close to all of the couples having sex in the bathroom.

But, alas, even though you and your friends have complained bitterly about how much clubs suck, there’s always some dumb, self-centered bitch who forgets everything negative she’s ever said about them, and insists that she wants to spend her birthday in hell (the club). “It’ll be so much fuuuuuun,” she whines. “Plus, it reminds me of when we were young, and were more exciting.”

“Shut up, Kendra. You’re turning 23, you’re not the crypt keeper. And if you actually have fond memories about that time that you gave a guy a BJ in the club bathroom after ten tequila shots, then I’m genuinely worried about what you consider to be a good time.”

Clubbing sucks, but so does not having friends. Kendra is now adamant that not only are you “all going to have so much fun at the club” but thats she’s “basically a cougar now.” Trust me, if Kendra wasn’t the same shoe size as you, and didn’t have her daddy’s credit card to buy designer shoes she doesn’t mind lending you, you would totally reconsider this whole thing.

Look, you’re going to have to survive this night, and now probably another one in two weeks, since Tiffany has been “inspired” by Kendra’s party, somehow.

1. Look young
Unlike Kendra, you probably don’t have a complex about your aging yet. However, if you’re starting to look old enough that they don’t ask to see your ID when you order alcohol at nice restaurants, you’re too old for the club. You have to take some measures to ensure that you don’t stand out, since that will only draw more attention to you from the group of 40-year-old “businessmen” in silky button-down shirts, revealing too much chest hair. Hit up Forever 21, or pretend you still give AF about how you look by curling your hair.

2. Get there early
Remember, you are “old” now. Get there early enough to ensure that the freshmen haven’t been able to sneak out of their dorms yet. If you spend about 45 minutes in the club without all of the “young people” who think it’s not cool to get there before the cost of cover increases, hopefully Kendra will realize she hates it when it’s in “full swing” but feel like she got her fix.

3. Don’t eat beforehand
“C’mon, Kendra, lets just not eat dinner… just to make sure that you look perfect in your skin tight, totally not skanky, dress!” In truth, you don’t care at all about how Kendra looks, however, you do care about how early you’re able to leave the club. You know after she drinks a bottle of champagne, and however many shots she gets from her ridiculous birthday sash, all she’ll want is pizza. “Its your birthday, girl, you totally deserve the pizza, c’mon, I’ll get the uber!” Mission accomplished.

4. Be the wingwoman of the year
“Omigod that guy over there is totally checking you out,” you claim, as you point randomly in the direction of a group of horny-looking boys to Kendra. She seems skeptical. “Kendra, it’s your birthday, and as your friend, it’s basically my duty to ensure that you have great birthday sex tonight. I would just feel like such a shitty friend if you didn’t go over and talk to those boys right now!” The quicker Kendra leaves, the quicker you leave, amiright? Who knows, maybe the only reason she dragged you all to this damn club in the first place was because she hadn’t gotten laid in awhile, and was starting to think irrationally. You’re basically doing the world a favor.

5. When in doubt, throw an afterparty
“The boys at Zeta My Dad’s A Lawyer Pi want to throw you an afterparty!” you squeal to Kendra, pretending that you didn’t need to beg them and promise that you’ll convince your sorority to agree to a slutty themed mixer in the near future. Who cares that they’re the loser frat. Who cares that their house looks like a health hazard. Anything is better than this GD club; and you don’t care if you have to sit on a leather couch that looks like it came straight out of the casting room, and pretend you give AF what their new pledge has to say to get away from it..