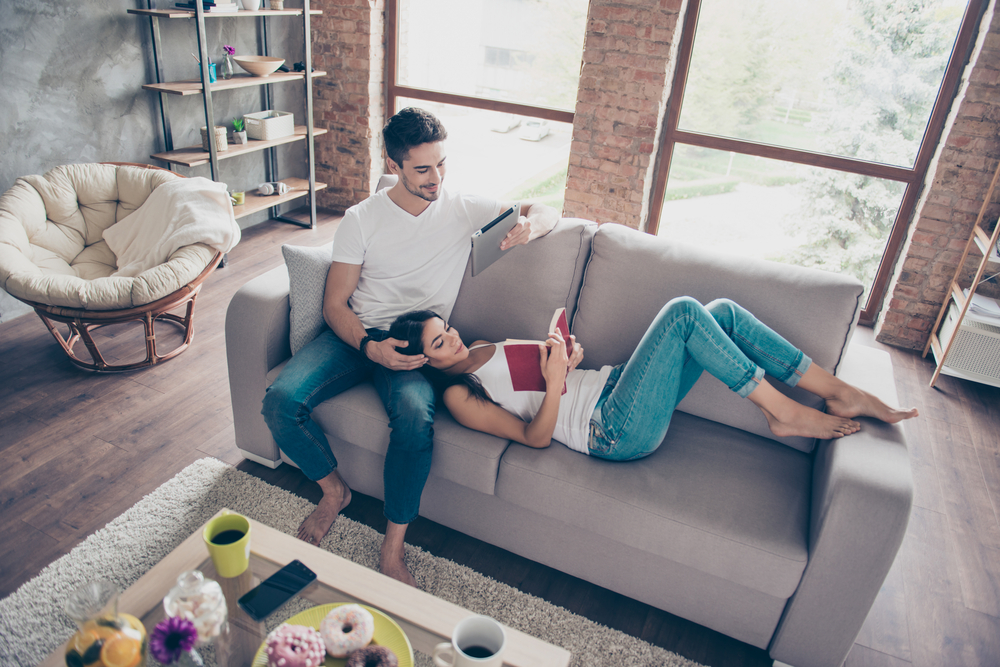 Boy meets girl. Boy wants to sleep with girl. Boy invites girl back to his place. Girl starts going over to his place all of the time. Girl leaves her dirty dishes around the house and takes 45 minute showers. Boyfriend’s roommates despise girl.

When I first met my boyfriend, I was still living in the dorms, while he had moved out, and was sharing a house with friends. When we had to decide whether we would spend the night in my single bed, always in earshot of my roommate, or on his queen sized bed, with all the privacy we wanted, the answer was pretty obvious. During my time over there, I was terrified of stepping on his roommates’ toes. I never even turned on lights during hours that they might be sleeping, worried that I might wake them up, never mind use their communal property. While, in retrospect, I shouldn’t have felt guilt about using a coffee mug, in a house that was already shared by six other people, I knew that it wasn’t ideal for them to have me stay over there all of the time, but they were nice enough never to say anything.

Two years later, and I’m now in my own house with my own roommates. When one of my male roommates recently started seeing a girl (who also has her own house and roommates), I was perfectly willing to return the favor that was given to me by my boyfriend’s roommates. I’ve heard stories from friends who have been told that their S/O can only stay over one night a week, and I swore I would never be that psycho roommate. Considering both parties had their own houses, I assumed that the time would be split pretty evenly between the two of them. But I couldn’t have been more wrong. I have now unwillingly been given a seventh (!) roommate, who, frankly, could use a lesson on not only how to be a good roommate, but how to be a good roommate to people who did not agree to live with her.

Since I have been on both sides of the situation, here is a list of how to be polite to your boyfriend’s roommates:

1. Don’t actually think of yourself as a roommate.
Imagine being invited to your “new roommate’s” party that she’s hosting … at your house. Realize that while you might spend a lot of time at your boyfriend’s house, his roommates are letting you stay there so that the two of you have a place to fuck. If you two only wanted to hang out, you could have gone literally anywhere. Don’t start thinking of their house as yours, unless you want them to tell your boyfriend that they “think he could do a lot better than you.”

2. Respect communal property.
If you’re in the shower every time I need to use it, watching my TV every time I get home, and using up the entire stove every time I need to cook, it’s a problem. For a rule of thumb, if you are going to do anything that might be construed as destructive, do it at your own house. Chances are, your own roommates would be annoyed if you took at two hour bath in the shared bathroom, so don’t think that people who aren’t your roommates won’t be. Your boyfriend’s roommates probably don’t know you too well, and might feel uncomfortable confronting you on your hygiene habits, but don’t think that they won’t bitch to your boyfriend, who will definitely not be happy always taking responsibility for your poor manners. It also never hurts to quickly check in with the other roommates before you do something, to at least demonstrate to them that you acknowledge their presence.

3. Don’t take food.
It’s annoying as is when people who are your roommates take food, never mind those who aren’t. If I wake up and find out that I have nothing to eat because you used all of my food to make your boyfriend a romantic breakfast, I’ll probably lose it. The excuse “oh, I thought that this was my boyfriend’s food!” gets old pretty quickly. If you are in the habit of constantly cooking for your beau, ask him to label his food, so you know what’s what. If your boyfriend is like much of the male population who believes it’s perfectly acceptable to live off of pop tarts and cold pizza, think about buying some food yourself to keep yourself sustained when visiting.

4. Clean, clean… please clean
If you use the excuse that you “don’t know where things go,” I will scream. It’s pretty obvious where the dishwasher is, and if you truly can’t find it, the rest of the roommates will collectively sit your boyfriend down and tell him that he is far too smart for you, and he has to break up with you immediately. While you’re over here often enough that it would be reasonable for you to be on our chore chart, I’m not going to expect you to vacuum. Just put away your dirty dishes, anything else that you may use, and clean up your spills. If you want to pretend that you live here, and act offended when you’re not in the roommate Facebook chat, take some responsibility.

5. Don’t leave your shit everywhere
I’m the first one to understand that it’s imperative to leave some necessities over at your boyfriend’s place, so that you don’t look like Shrek the next morning. By all means, please leave some toiletries and a change of clothes. I’ll even go as far as telling your boyfriend that it would be really nice of him to clear a couple of his drawers for you (trust me – he actually respects my opinion). But when you start to move your stuff in by box-load, to the point where it doesn’t all fit in his room anymore, you’ve gone a bit too far. Makeup wipes are a necessity, but all of your crafting supplies definitely aren’t.

6. Spend some time at your own place
I’m not saying this just because your presence is bugging the shit out of me. This is true advice, from one girl to another. Just as much as your boyfriend’s roommates don’t enjoy your presence 24/7, neither does your boyfriend. If you’ve only been dating a few months, and you’re already basically living together, he’s going to get sick of you. Show him that you have other plans besides hanging out with him every night, and insist some nights that if he wants to see you, he has to come over to your place. Give him more time to fall in love with you before you show him how annoying you are to live with..