I Am A White, Non-Racist, Non-Violent Mizzou Student And I Actively Oppose #ConcernedStudent1950 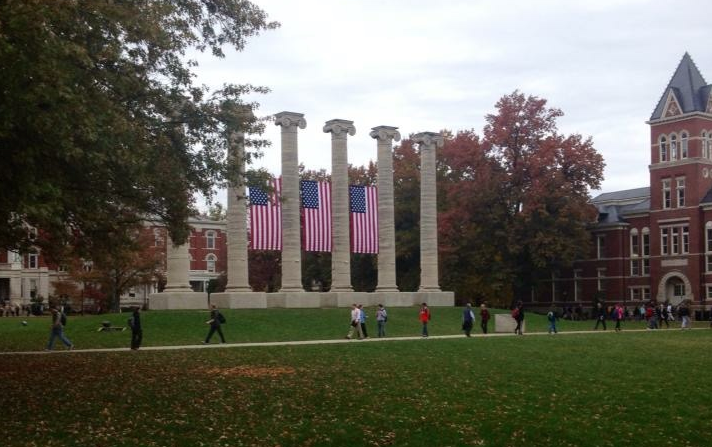 If someone had told me two weeks ago that my school would soon be on national news for a series of racial incidents and campus-wide chaos, I would’ve asked them what drugs they were on and advise that they seek immediate medical attention. But in the past week or so, mayhem has been the constant theme here at Mizzou.

On November 2nd, Jonathan Butler, a University of Missouri graduate student, embarked on a hunger strike in order to accomplish two things. The first was to ensure that Tim Wolfe, the president of the entire UM system, would be fired. The second was to end racial discrimination.

He succeeded in one of those things. Wolfe is gone, all because Butler blamed him for the actions of a few racist individuals. This man, a Columbia native who worked hard to earn such a respectable job, is now unemployed with a permanently soiled reputation. The fact that Butler assumed that Tim Wolfe could eradicate racism in every single person on this campus is downright stupid. There are some people for whom racism is so ingrained that it is an automatic response. It’s unfortunate and it’s wrong, but Tim Wolfe has no control over these people’s beliefs. Some argue that he “failed to properly respond” to various racist incidents, which poses the question, what would you have done? Sought out the individual who used the “N-word,” taken him by the shoulders, and shaken him back and forth screaming “STOP BEING RACIST” until he gave in? Wolfe oversaw four universities with over 75,000 students. He had no bearing on their values and personal beliefs.

The second purpose of the movement was to end racial discrimination. So why does our campus feel more divided than ever? Why are classes spontaneously canceled due to anonymous threats on both white and black people? Why are students afraid to leave their homes, thus failing to seek the education we came here to obtain?

Here’s the sad truth: The #ConcernedStudent1950 movement was driven by anger and drama, but those involved did little to channel their passion into a constructive approach. They failed to make informed arguments, and instead caused a widespread panic throughout this campus.

For the past week, Jonathan Butler has politicized our campus, counteractively racially divided our student body, and threatened the way our leaders will make future decisions. He claims he wants to start a conversation, but that conversation only includes a small portion of the more than 30,000 racially diverse students on this campus.

On top of all this, he adamantly protests that white people who don’t speak up are racists. Tell me: How does that promote equality?

I refuse to be labeled racist simply because I don’t support #ConcernedStudent1950.

I refuse to be labeled racist simply because I’m not one of the masses of students and teachers that were blindly coerced into supporting a movement because they are afraid to disagree and be deemed a racial bigot.

I refuse to be labeled racist by a man who is so deluded and self-involved that he actually threatened suicide to get his way. Whether or not you choose to believe it, Butler utilized violence to get what he wanted. I don’t respect his methods of change, and I see it as a slight to people who are at legitimate risk of ending their own lives.

But Jonathan’s worst offense, in my opinion, is his direct attack on every student’s right to free speech.

He protests because he feels that nobody is listening to him. He feels he has been silenced. So why does he consistently silence others? Isn’t that contradictory to his argument?

Tuesday’s email requested that those who hear “hurtful speech” contact the police and provide a detailed account of the offender. It basically gave students the permission to call the cops every time someone is mean to them.

I’ll go ahead and say it: this notion is completely ridiculous. It’s a borderline laughable waste of time.

Obviously I don’t want to see people hurt, or give racists an avenue to offend people. I don’t support hateful messages or their content. However, I absolutely support everyone’s right to say what they think. The founding attitude of country is that you are allowed to think what you want and voice your opinion, even if those around you don’t agree. That’s the basis of freedom, and we are dangerously close to forgetting this notion.

Hurtful things that people say to you may provoke an emotional response, but it is our obligation as adults to reflect on such incidences and channel our rage or sadness into productive thought. It is definitely important to recognize when people go too far and impose a legitimate threat, but we have to realize that verbal insults are just that. They’re only words, and how you choose to deal with your own damaged ego is no one’s business but your own.

Jonathan Butler has no right to impede on anyone’s first amendment rights, simply because they have the potential to hurt his feelings. A man of his education should recognize the fact that freedom of speech comes from a legal standpoint, not a moral standpoint. The university should not be able to punish people for offending others. The police do not have the right to tell me what to believe or how to feel. That is my choice, and it is a choice protected by the constitution. Freedom, more specifically freedom of speech, is more important than your feelings. Get over it.

Moreover, people of all races and backgrounds are offended every day. Women are sexualized. Muslims are called terrorists. Gay people are judged for their sexual preference. Sorority girls are assumed to be bimbos. Fraternity men are deemed arrogant. So why is it that Butler gets to choose the importance of discrimination? Why does he get to prioritize intolerance? Why are his problems more important than mine, or yours, or any other of the 35,441 students currently enrolled in this university?

I’m fed up. This campus has been through enough.

Classes are consistently canceled. Groups march and chant through study areas. Media reporters and cameras are everywhere, trying to create a story rather than uncover the truth. The football team went on strike. Social media posts threaten the lives every student, regardless of race. Businesses are closed. Journalists are harassed and stripped of rights. Sororities are on lockdown. MU alerts are frequently released after false rumors of KKK meetings circulated through social media. Teachers are resigning after receiving threatening emails and phone calls. We’ve descended into chaos, and all because a movement meant to give a voice to minorities subsequently silenced others by refusing to allow any dissenting opinions.

So where do we go from here? How do we pick up the pieces and restore this university’s reputation?

Let’s start by listening to each other. Let’s put aside our anger and come together to make a change we can be proud of. Let’s make respectable moves in the reshaping of our school. Let’s include students of all backgrounds when making decisions. Let’s ALL have a voice.

We have a lot to be proud of, and despite current disorder, I’m forever proud to be a tiger. .