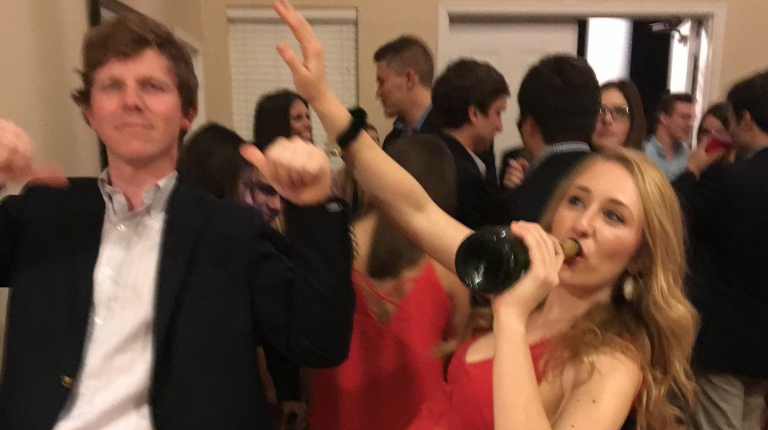 I like to believe that Australia is full of Hemsworth-esque men. And that at any given moment, if I ever decide to endure the grueling 22-hour flight, I would land in a country where there would be tall, ripped, blonde surfers, ripe for my picking. I am a true sucker for Australians and their panty-dropping accent.

The summer before freshman year, I decided to do one of the summer courses on how to prepare yourself for college. Basically it was useless knowledge on how to write an essay and prepare for multiple choice exams. But while I was ready to focus on excelling at school at the time, that changed when heard a sexy Australian accent coming from the back of a the lecture hall. After several months of only interacting with completely unattractive guys working at the local grocery store, the thought of an Australian guy was great.

I made a beeline for him after class. “You seem like you’re not from around here! I could totally show you around, if you want me to.” I was never really one for the chase. Unfortunately, my ears told me to flirt before my eyes had time to register what was in front of them. I was so convinced that all guys from Australia were human Ken dolls, that I had forgotten to actually check this guy out. While he wasn’t completely unattractive, he was no Hemsworth. Still, I was blinded by his accent.

For the next few days, he followed me around like a puppy. While this should have been my first warning sign that something was off, I was fine with having someone to talk to. I remember talking a lot about me, and really only learning that he was from Australia and wanted to be a doctor (is anything else really important?). On the last night, I expected him to make his move, or at least go for some under-the-shirt action. When he didn’t, I assumed things were done.

I was surprised when he texted me less than 30 minutes after I left. Since I was bored, I continued the conversation. He asked me a ton of questions, and since there’s no topic I like discussing more than myself, talking to him was a fun way to pass the time. Progressively, he started to get more forward over text. Then before I knew it, every time I would post a picture to Instagram, he would text me telling me how ~*beautiful*~ I was. The more he complimented me, the less I responded to him, being the commitment-phobe that I am.

When summer ended, and it came time for me to move to university, I was so excited that the Australian guy hadn’t even crossed my mind. Before I had even started unpacking, he started blowing up my phone. Not wanting to seem rude, I told him that I was “really busy moving in” at the moment, but I would “definitely look out for him during activities.” When he asked for my room number I said that I “wasn’t sure.” But somehow he found me, and less than ten minutes later, his little Australian head was poking through my door. He picked me up, and squeezed me into a gigantic hug, before throwing me onto the bed and handing me a huge bag. In shock, I opened the “present” that he was incredibly giddy to give me. Inside, there were numerous little trinkets and sweets. I usually would have seen this as an incredibly sweet gesture, however I barely knew the guy.

After a few minutes of awkward conversation, the RA showed up. “You already have a guy over?” he looked at me questionably. “I’m her boyfriend!” the Australian, who I now had determined was very creepy, responded. “He means friend,” I interjected, “he’s from Australia,” I continued, as if it made a difference. The damage had already been done. Instead of fighting a losing battle, I decided to flee. I told him that I was heading to get my student information, and, to my dismay, he followed me. The lineup to get my information was insane. Nearly every other freshman must have been there. Instead of mingling with cute new guys, I was stuck with my unwanted “boyfriend.” After waiting for hours in line, I tried thinking of ways to get rid of him. “Why didn’t you get your student information? You know you need all of that stuff to even get into residence, right?” I asked, assuming he knew nothing. “Oh I know, I already got it, I just wanted to be with you,” he said creepily.

Walking back to my dorm, I was silent, unsure of what to say to this foreign idiot, or how to shake him. He turned and said to me, “I’m so happy we’re girlfriend and boyfriend.” He prodded, “We are girlfriend and boyfriend, right?” At this point, I just wanted to get away from the guy who I was pretty sure had my latest instagram photo as his phone background. “Nope!” I yelled as I sprinted into my building.

To my dread, he was hanging out in front of my building that night, undoubtedly waiting for me to leave with the rest of the freshman to the first night of activities. Slightly tipsy, I did the only logical thing I could, I grabbed the guy who I had been speaking to for the past five minutes, and started making out with him. Now that’s problem solving they don’t teach you in school..