I Hate Crafting, And You Probably Do Too 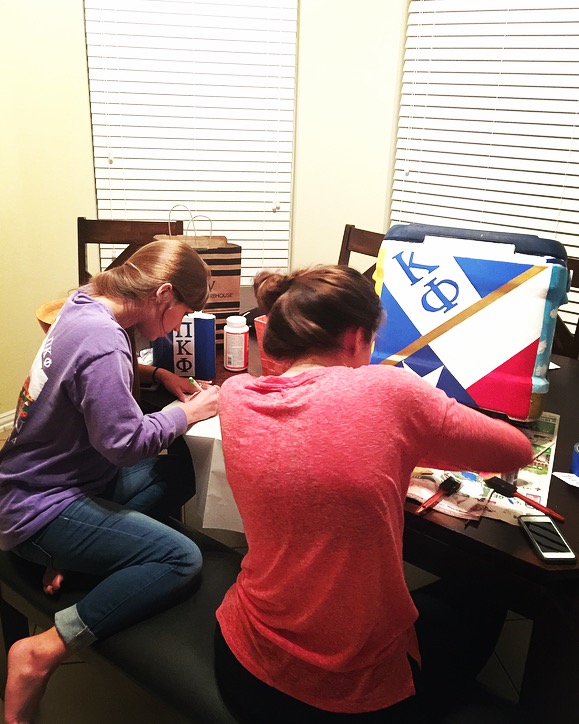 I am a sorority girl… and I hate crafting. I hate the fact that I have a basket strictly dedicated to glitters, that coupons for craft stars are marked as ‘important’ in my email inbox and that I’ve ruined at least one pair of leggings with pink paint every time I take a little.

During my own rush period, when I first entered what is now my sorority house I was taken aback by the number of crafts that were literally everywhere. I swear I inhaled glitter as I moved from room to room, astounded that even that bathroom had a “throw what you know” hand-painted canvas. I’ve still surprised that I was asked back for the second day of recruitment after I asked “did you get these off Etsy?”

If you had asked me four years ago how many Friday nights I would spend on the ground, stressed about how my handwriting looked in acrylic paint when I write “its the LITTLE things,” I would have definitely scoffed and said none. I dropped art class in high school as soon as I could. The only thing I crafted in high school were excuses on why my parent’s alcohol was missing. Girls who talked about crafting were most likely virgins who liked wearing their own lopsided, hand-knit sweaters for school picture day.

It wasn’t until I entered the land of sororities that I realized that hundreds of girls on campus traded in their bottles of wine and frat shoes for a paintbrush for a few weeks out of every year and crafted for each other. It seems cute… in theory. You’re making something that money can’t technically buy (unless you want to reconsider Etsy) for your sisters, littles, and the other girls that you care about.

The thing is, the whole process is a little bit… uncomfortable. Firstly, for the most part, you don’t actually know the girl that you’re crafting for that well. Chances are, you’re spent a total of four hours (two of them being at rush parties) with your littles. You only know her middle name because your VP New Member provided it to you on a spread sheet. And now you’re going to spend hours crafting about how much you love her, and how she makes your life complete. Taken out of sorority context, imagine if you wrote the guy that you went on two dates with mushy cards, and spent hours labouring over elaborate crafts for him? It would be a little strange… and more than likely would lead to him “falling sick” the day of your next date, and eventually ghosting on you.

The next, and arguably most important thing to remember, is that we’re not all Pinterest stars. No matter how much money, time and dedication that you put into a craft, some of us will never have the knack that it takes to start our own Etsy store. Lilly Pulitzer prints may start to resemble an ugly, pink camo if you don’t have a steady hand, loose glitter can turn into a BIG mess as soon as you do something as simple as flip your hair, and theres a very good chance that whatever you make will not turn out as well as it did in the picture you saw on the internet… especially if you decide to have that glass of wine while you wait for the base coat to dry.

Its a very likely scenario that you’ll be left in the position where you have to give your subpar crafts to a first year who was just as confused as you were years ago by the whole cult of crafting, who will now have to hang your crafts in her dorm room for the world, and all of her hookups to see. She’ll feel guilty, not only because she doesn’t know you, the girl who’s putting in more effort to impress her than you have with any guy, but because its apparent that you put effort into your glittery mess.

Do you little a favour this season, and just give her a basket of wine instead.