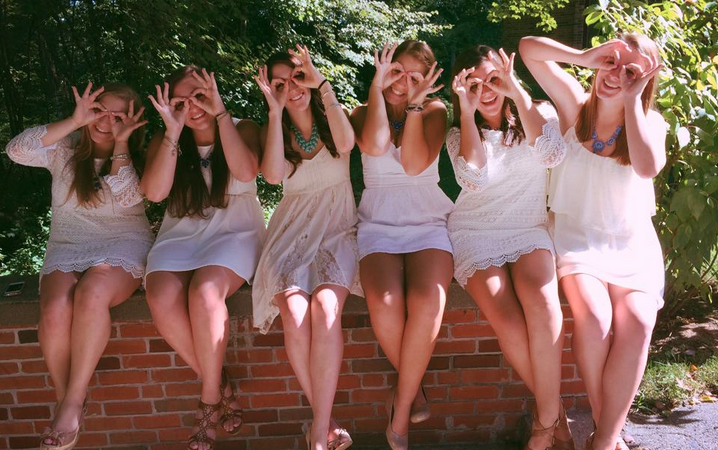 Two weeks ago, I downed a totally healthy number of vodka sodas with lime, got on a stage, and told jokes for the first time. I had five minutes to say whatever I wanted and hope laughter followed. I’ve been a freelance comedy writer for over a year, covering topics from big butts to fraternity mountain weekends, to shooting off fire tweets; yet the spotlight and the microphone made it feel like I’d never uttered a joke before in my life. Luckily I had the comfort of friends in the audience, notes, and another vodka soda on the chair next to me, so once the initial panic of a being handed a mic in a crowded bar wore off, I felt fantastic. My timing was perfect, the audience’s laughter came when I wanted it to, and my voice never cracked. I came off the stage feeling absolutely elated. I had successfully done what few dare to do: standup comedy. And not only had I gotten through it, I’d elicited harder laughs and more exuberant applause than anyone who had gone before me that night. The feeling was like seeing your rush crush in your letters on bid day combined with acing a test you weren’t very prepared for; an intoxicating, overwhelming pride that you pulled off something big.

My excitement faded when the next comic took the stage and immediately said, “Did no one tell you you’re too pretty for this? There’s nothing wrong with you—you can’t get up here unless something is fundamentally wrong with you, but I’m pretty sure you’re perfect.” I laughed along with everyone else, but I was confused. What did he mean nothing was wrong with me? I’d just stood up there and talked about my messy breakup, Tinder, covertly measuring penises, being a crazy person, and eating an entire twenty-piece chicken nugget meal. But he wasn’t talking about my material, he was talking about my appearance. Now I’ve got next to no boobs, a big nose, and more freckles than a week old banana. Not exactly “perfect” by anyone’s standards except my dad’s, but I’m pretty sure dads are contractually obligated to tell their daughters we’re perfect to quell any desire we may develop to take off our clothes for money. No, it wasn’t because I’m some sort of beauty queen, I mean yeah I regularly kill the eyebrow game and have the hair of a mermaid with a teasing comb, but trust me, these mid-thirties dudes who appeared never to have outgrown their respective grunge phases weren’t honing in on either of those qualities. It was because I struck a sharp contrast to the rest of the comedians as the only woman who got on stage that night.

No one commented on any of the male comics’ appearances. No one discussed their outfit choices, though my crop top and gold maxi skirt made me a “sexy gypsy” according to one of the comedians. There was one other first-timer, a guy, and a college student like myself. The host congratulated him on his first time, then congratulated me on being the reason every comic messed up, because my presence as an attractive woman was distracting. This other student and I had done the exact same thing, but we weren’t complimented on the same achievement. When the show ended, one of the younger guys apologized for “those lusty douchebags,” saying that making fun of each other is how comics show their love. Yet the jokes about me were overtly sexual, appearance based, and never once referenced a joke I’d made.

As I got dressed to get on stage again the next week, I didn’t do anything differently. I did full makeup, blew out my hair, and purposefully selected another crop top/maxi skirt outfit. As women, we can’t stop people from judging us based on our looks. Society’s gender ideologies will have to change for that to happen, and while progress has been made, we’re not there yet. But we can go out there and do so well that our success eventually speaks louder than the way we look. I’m going to get up there again tomorrow night, probably in another crop top, and tell my jokes. I’m going to listen to the laughter, ignore the comments about my ass, call upon the spirits of Tina Fey and Mindy Kaling, and continue to kill..