I’m Not A Wild College Student, Not Yet An Adult 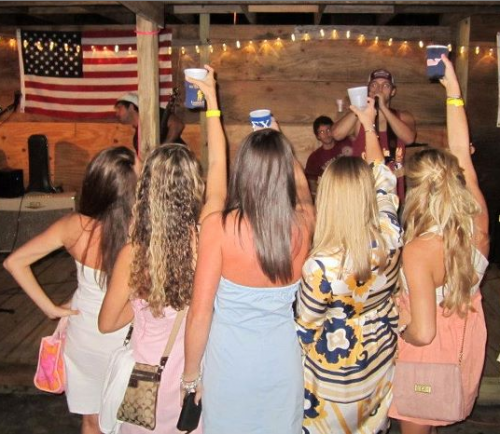 Being in your twenties is weird, plain and simple. Some of my friends are getting engaged, and have already transformed into Suzy the soccer mom, wearing exclusively Lilly Pulitzer, with 2000’s inspired sunglasses on top of their head at all times; while others are still accidentally Snapchatting their boobs after one too many tequila shots. I’d like to say that I’m somewhere in between, exclusively getting wine drunk, while remaining terrified of both commitment and everyone I have on Snapchat seeing my boobs (hi mom!)

Unfortunately, this isn’t always the case. Contrary to what I tell my parents, friends, and myself: I suck at being an adult… but I don’t suck as much as some other people. I no longer feel accepted in camp “wild freshman,” but I’m a long way off of being apart of the “lets stay in Saturday night so we can get to the farmer’s market early on Sunday” crew.

Instead of confronting my problems, and working my way either forwards or backwards; so that I have some sense of self-identity formed from belonging to a group once again, I’ve decided to write too much about my personal life on the internet. Look mom and dad, I’m good at something! So here is a comprehensive list of everything that I’m fucking up at in my life… but only fucking up to the point where its personally embarrassing, instead of publicly concerning.

Drinking
A few months ago a freshman offered me a shot of straight Smirnoff. Not wanting it to appear as though I couldn’t keep up with a few eighteen year olds, I quickly accepted; after all, back in my day as a first year, I was able to drink Smirnoff, straight, without chase and any faces of disgust. “This will be easy,” I thought, downing the shot, without any sight of chase around. No. No. It was not easy. I staggered outside of the house and contemplated throwing up and leaving for the next half hour.

However, all I have done is simply graduate from the cheapest type of vodka to the second cheapest. I’m still constantly in awe of anyone who offers me alcohol – especially nice alcohol – when I go over to their place. Its not that I don’t buy a lot on my trips to the liquor store, its just that the supply usually doesn’t last long enough for me to have enough on hand to offer it out. Basically, I believe that the pinnacle of adulthood is being able to offer surprise guests wine that comes with a cork; and I’m unsure if its more problematic that I’m unable to do this, or that I think this is what adulthood is all about.

Food
If my drinking habits weren’t bad enough, just wait till you learn about my food ones. Its not uncommon for me to go to the grocery store, pay far too much for a piece of salmon (I could have bought two vodka crans, at the bar for this price), eat said, small, unsatisfying piece of fish, and order a pizza a few hours later. I strictly cook from impractical recipes I find on the internet, and Chrissy Teigan’s cookbook; however I put Gwyneth Paltrow’s on display so that I look like I have my shit together.

I get an alarming amount of my daily fruit intake from Sangria, and still have the ability to justify to myself that spinach dip is basically a vegetable. The first drop of alcohol that enters my body has the ability to stop all of my self control and willpower; and no matter how good I’ve been eating and Snapchatting myself eating salmon like a GD adult, no night of drinking is complete without drunk food.

Working Out
A very important part about being an adult is coming to accept the fact that your jeans from high school will no longer fit after the first few months of your freshman year. However, that doesn’t mean the jeans that you bought after your first few months of living the university life of binge drinking and exclusively eating cafeteria pizza.
Honestly, there are two reasons why I go to the gym: (1) to not feel guilty about the calories count of a whole bottle of wine (2) to continue to fit into said jeans, because all of my money is going towards wine.

Popularity
Out of high school, most people, or at least the people that you’ll want to associate yourself with, will stop caring about who’s “cool.” Being on a college campus, its hard enough to keep track of where all of your classes are located, never mind actually tracking the enormous student body to determine who’s popular, and who’s not. However, the second that my friends and I see a group of tall, skinny, blonde girls, who are undoubtedly more popular the us, we all start bitching about how “stupid” popularity is (all while wishing that we were part of the elite squad who have guys begging to just buy them a drink.)

I guess I’m just too mature to care about not being popular, but still immature enough to be considered “unpopular.”

Roommates
On one hand, I’m mature enough to not live with my parents anymore. On the other hand, I’m also not mature, or wealthy, enough to live on my own yet. Thus, my roommates, other people who are in roughly the same life stage as me, who are questionable people based solely on the fact that they agreed to live with me.

Really, I want to start living an adult life, but my roommates just won’t let me. I mean, really, how are am supposed to live in the clean, perfect, apartment of my dreams when they keep leaving their shit everywhere. I mean, my shit is ok, because it fits into the aesthetic of the place, but their’s just ruins it. Really, there’s no point even cleaning the place, and making it look Pinterest-worthy if they’re going to continue to leave their stuff everywhere.