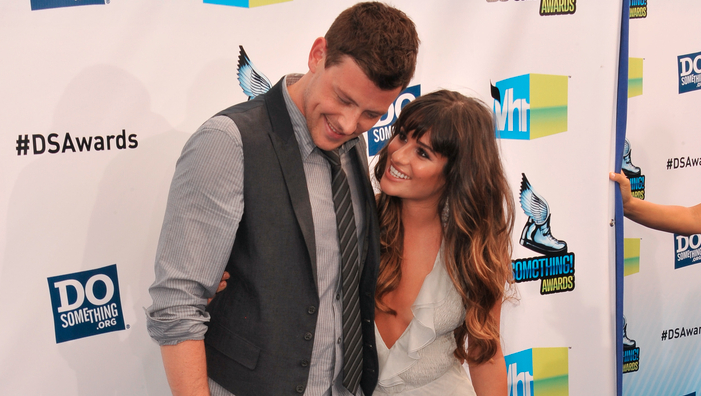 You ever get those moments when you just like, decide to be sad? Things are going totally fine for you. You look skinny, your hair doesn’t actually look like a rat’s nest, and everyone you love has texted you back in an appropriate amount of time. The sun is up. The sky is blue. And you’re not even hungover, despite how much vodka you went through last night.

And then, well, and then it hits you. You want to cry. No, scratch that. You *need* to cry. Just like you need air or water or stuffed crust pizza, you need to sob so hard that snot runs down your face and you feel like you’re going to throw up.

Four years ago, our hearts ached when the news of Cory Monteith’s death broke. Most of us grew up with “Glee” (or at least made fun of it while still sort of finding the arrangments catchy). The hardest part about his death, other than the fact that a young person was taken way too soon, was Lea Michele. As their characters on the show fell in love, so did they in real life. They quickly became one of the country’s favorites on and off screen couples. They complimented each other so perfectly, and it made us believe that even if we were sort of nerdy, we too, could end up with a quarterback.

And then, when he passed away, our heads turned town Lea Michele. Not only did she lose her on-screen partner, but she lost the guy she thought she was going to marry in real life. Just for a little recap (and to get the waterworks started), here are a few clips from the final episode after Cory (and his character, Finn) died.

Fuck. That was brutal. And even though four years have passed, that doesn’t mean anyone forgot. And it especially doesn’t mean that Lea Michele forgot. She recently posted a picture on her social media accounts honoring her late on and off screen boyfriend who passed away on July 13th, 2013.

Hard to believe it's been 4 years… We miss you C… love you more ❤️ pic.twitter.com/kIXoy4s4zK

In the picture, you can see the two of them in the Polaroid looking heartbreakingly happy. And what’s that she’s wearing? Yeah, you guessed it. Finn’s jacket from the show. She posted a similar picture on Instagram with the caption, “4 years and it still feels like yesterday.. love you more C❤️.”

While it’s devastating to think that these two didn’t get the happily ever after they had been hoping for (and that Ryan Murphy had written for their characters in the show), there’s something beautiful about the fact that after all this time, she still loves him just as much as she did four years ago. She still loves him more. I hope she can still picture his face and hear his voice. And maybe in that sense, he hasn’t really left but is there right beside her, every step of the way.

Now if you’ll excuse me, I’ve got a date with some red, puffy eyes and a big ole box of tissues.