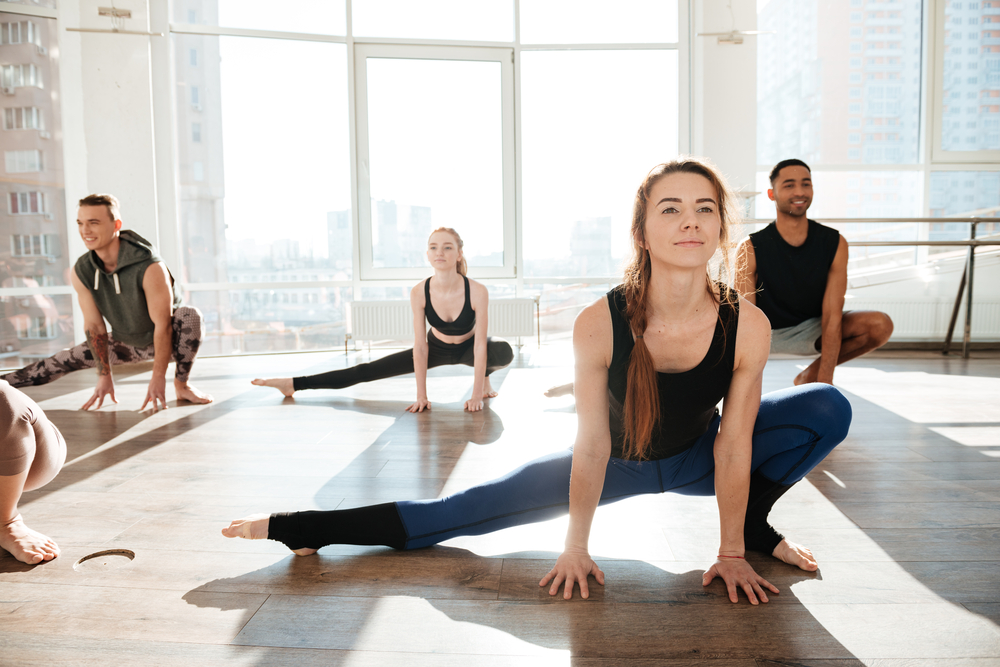 Call me sexist, but when I go to a hot yoga class, I expect girls and gay. Trust me, it’s not because I think that men are incapable of doing a downward dog, or that anything about stretching, and feeling hot AF after sweating out an entire week’s bad decisions is inherently feminine at all. Men not going to hot yoga should be seen as a sign of common courtesy; they’re allowing us to have our private hour, where we generally reach our peak grossest form, with no dick in sight.

There’s absolutely no way that I’m going to reach my peak zen, where I’ve sweat so much that not only am I delirious, but I’ve stopped caring about the beads of sweat pouring off of my body. Its basically a fact that hot yoga is ineffective if the hot guy beside you can see as your boob sweat falls into your mouth as you move into downward dog — don’t pretend to be grossed out, you know it happens.

Let me paint a picture for you: it was Friday night, and I was feeling especially self-righteous due to the fact that I was heading out the door with a yoga mat, while the rest of my roommates were getting ready to go to the bar. For an extra, added effect, I smugly said “I’m honestly starting to enjoy the taste of Kombucha more than wine” regardless of the fact that the night before I had drunk so much I was slightly concerned that I would sweat out rosé during the class.

I placed my mat down beside my friend’s in a place conveniently close to the door in hopes that some first timer wouldn’t be able to take the class, and briefly open the door to let themselves out, and the cold air in. I laid down on my back, closed my eyes, and tried to forget that I had just spontaneously spent $200 at a nearby store, due to the fact that I had ten minutes to spare before class, and couldn’t stand the thought of socializing with the yogis.

“Hey, excuse me, is this yours?” a unmistakably straight, male, voice asked.

I opened my eyes, and after taking one look at the shirtless man towering over me, I instantly felt self-conscious being at my most unflattering chin angle. He was holding my water bottle, and, my socks, and I immediately felt myself die a little inside. “I am so sorry, I didn’t expect anyone else to be coming,” I lied, not wanting to admit that I was simply a brat who didn’t want some sweaty soccer mom with a New Year’s resolution near me.

“You’re definitely not forgiven,” he smirked back. My instinct to flirt back lasted for a split second, before I was reminded of the reality that in just a few short minutes, my boob sweat and eyebrow makeup that I had hoped was light enough to seem natural, would be all over the place.

As the class progressed, the sweatier he got and the hotter he looked. His abs glistened with sweat as he moved from position to position. While I couldn’t stop thinking about how he would look in other positions, he likely was looking at me, wondering how it was possible that I became so sweaty, red, and unattractive in a matter of seconds.

The teacher instructed us to lay on our sides. I couldn’t help but stare at the girl in front of me, watching as the sweat unattractively rolled off of her body, as she looked liked she was minutes away from actual death. The problem was, this girl was significantly more in shape than I was, meaning that not only was it likely I looked even worse than she did, but the cute guy behind me was probably staring at my ass in pure disgust.

The class, and the experience of what I’m sure hell actually feels like (let’s call it a trial run) was finally over. Now I’m not sure if I was delusional, due to the heat and the unnecessary amount of stress trigged by the hot guy, but I swear he avoided eye contact as I dragged myself out of the door.

Sitting in the change room, still so damp I might as well have gone to an aqua fitness class, I managed to search “women’s only yoga” with my sweaty, sticky hands. Call it a lesson learned.