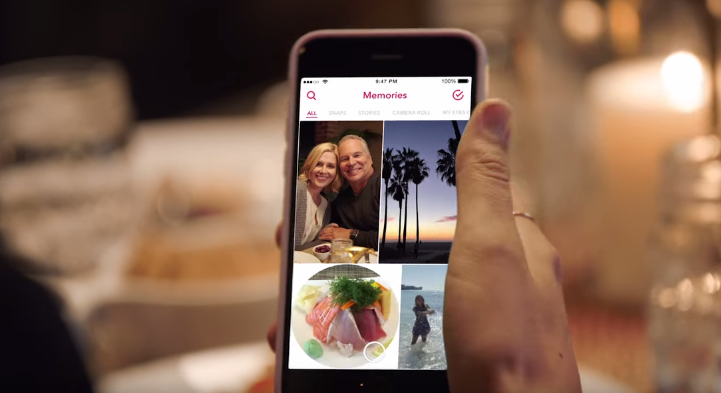 Snapchat was invented for one reason and one reason only. So we could show off our food, friends, and faces even when they’re not Instagram-worthy. Before the days of Instagram stories, Snapchat was our one and only source to see inside the scandalous, mostly unFacetuned lives of the world’s elite (as well as the rest of our friends). For awhile, we’d Snapchat anything and everything, just so people would pay attention to us. But now? It’s come down to a pretty simple science. If you own an iPhone, if you love pumpkin flavored things, and if you’re more of a Carrie than a Samantha, odds are you’re snapping these 11 things at any given time. Don’t worry, you can’t help that you’re so basic.

1. Yourself Singing In Your Car

You know what really makes me enjoy a song? Hearing a crummy recording of it with some amateur singing over the lead vocals. I’m not sure why this became one of the go-to snaps, but having to spend even a second looking at some girl’s face as she acts carefree and fun belting out “her jam” in a slightly-off-key-but-aren’t-I-still-cute way always makes me think “God, I wish there was a way to tell someone you hate them without telling them.” If you happen to be my friend and you do this and you’re wondering if I’m talking about you, the answer is yes. I am. I’m talking about all of you.

2. Just A Picture Of The Song You’re Listening To

No actual music in the background. No horrible singing voice. Nothing besides the album cover to show how hipster and authentic you are. You let the album art speak for itself, and the song’s name pave the way for judgment. But let’s be real, no one is actually judging you because you snapped a picture of a trendy song that literally everyone else in the world is listening to. You’re not doing anything *wrong,* but you’re not really doing anything right, either. 10/10 on snap unoriginality.

3. A Selfie Without A Filter

There’s nothing bolder than a selfie without the safety of dog ears or a flower crown. Either you’re too drunk to remember to put one on or you think you’re hot enough to go without one. It’s a bold choice that most of us are usually too scared to take. And yet, it happens to almost all of us at one point or another. When those rosé glasses come on and you drunkenly look at yourself in your phone, you can’t help thinking how fine you look. Until you check your story and immediately delete it and die the next day, of course.

4. A Selfie With A Filter

Is fall your favorite season? Do you still have a pair of Uggs in your closet? Do you run on Starbucks and live in yoga pants. The most basic of all the snaps, the selfie with a filter is one we all pull out when we’re out with our friends and three vodka sodas deep. No, it’s not original. No, no one actually likes to look at it. But something about sending a picture of our faces with pig noses to everyone we know just feels good.

5. You, Drinking A Drink In A Crowded Bar

There are two reasons we all do the classic, straw in mouth, phone up high, spinning video to show how crowded and cool the club we’re in is. First, you’re either bored out of your fucking mind and need something to do while all of your friends make out with their boyfriends, or you have a strong desire to show people how fun and popular you are. OR a fun mixture of the two. Still, it’s better than standing there and actually like, talking to people, right?

6. Your Friends, Drinking Drinks In A Bar

When you get tired of showing your own face, but you’re not having enough fun to completely put your phone away, it’s usually the time to turn the lens on everyone you’re with. Your hot friend who’s just a little drunker than you, dancing badly on the floor? Film her for thirty seconds. The overweight frat guy who lives for attention? Snap him taking a shot, and then watch as he puts his entire face in the camera and says something charming like, “fuck youuuuu.” The awkward friend zoned guy you brought along who wants to be anywhere but there? Film his uncomfortable smile as he tries to wildly gesture that he doesn’t want to be in your story, and if you don’t kiss him soon, he’s going to walk out of your life forever.

Sure, throwing the occasional food picture with a clever caption is somewhat acceptable on Instagram now, but what about all of the other carbs, treats, and diet-ruining foods you have throughout a day? If you don’t document it, you’re just a pig. But if you post it on social media, at least the calories count for something. Because nothing says “I’m a cool girl” like a Snapchat of you, stuffing your face with pizza outside of a bar on a random Thursday.

8. Whatever You’re Watching On TV

Whether it’s the new episode of Game of Thrones, The Bachelor finale, or the primer episode of American Horror Story, letting everyone know that you’re watching whatever important show is on is almost as important as watching it in the first place.

9. The Elliptical You Stepped On For The First Time In Months

We’ve joked about this since checking in at your campus gym became a thing on Facebook, but if you don’t Snapchat yourself at the gym, did you even go? Whether you go every day at 5 a.m., or this is your first time stepping foot in once since 2010, both gym rats and lazies alike all have one thing in common: they need to post visible proof that they got their sweat on that day. It’s not even for other people (because let’s be real, nothing makes us hate another human like seeing a picture of them at the gym) it’s for ourselves. Because as our parents always told us, posting pictures of yourself working out actually burns more calories. Or makes you lose more weight in the friendships that end because they can’t stand your gym snaps. Either way.

10. Laying In Bed Pretending To Be Asleep

We all know you’re not asleep. *You* know you’re not asleep. What are we supposed to do? Just believe that you fell asleep with your makeup on, cleavage out, and your pet snuggled up by your side? And that it was magically caught on camera? We’d give you major shit for it (and we do, in the group text you’re not a part of) but the thing is — we’re right there with you, pretending to be asleep and snapping it for the world when we’re too drunk to know better and too vain to care.

Anytime a somewhat decent sunset graces your town, your entire story feed is just filled with little balls of orange. When we see a sunset, we can’t just enjoy it. We want to, no, need to document it for all of our friends in the same town who are also looking and snapping the sunset to see it again. That’s just how it is. No, it doesn’t make sense. No, we don’t like seeing those pictures. Yes, we always skip them on other peoples’ feeds but hey — it’s different when we do it, right?

Don’t feel bad, though. Because if we’re all annoying on Snapchat, it’s not like we can all unfriend each other. And if you want to follow me, my snap is @rachalloy. Get ready for lots of sunsets, food, and car sing-a-longs. Don’t worry, though. It’s like, totally ~unique~ when I do it..