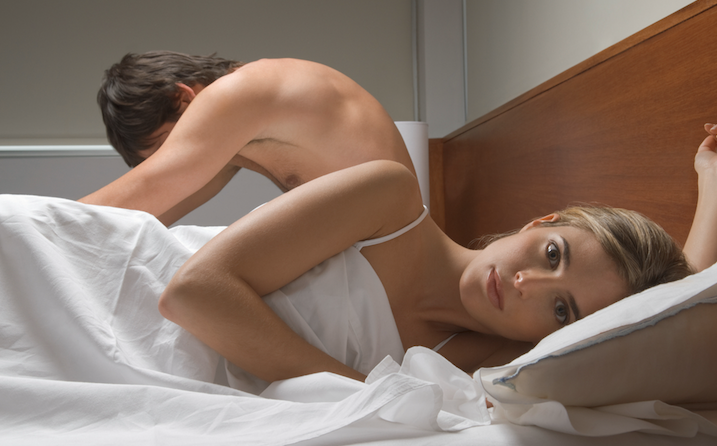 Lovemaking is an art. You have to have the perfect person, the perfect mood lighting, and the perfect timing in which you’re perfectly cleaned and shaven to have the hope of getting that big, perfect “O.” Sex, on the other hand, is usually not an art. It can be awkward. It can be weird. And a lot of people have no idea what the H E double L they are doing. Sure, they have the basics down. A few minutes of kissing, some hand action, maybe a trip to oral station, and then BAM, seven-fifteen minutes of lackluster thrusting. But their attempts to make it banging (geddit?) are seriously, seriously lacking. So most guys throw out a few clichéd sex lines, most likely from some porn they watched last night, in the hopes of giving you a time worthy of bragging to your friends about. Chances are he’s said one of these horrifying phrases. And chances are, you hate hate hated it.

1. Anything with “baby” attached to it.
In defense of the “baby,” some people think that this pet name is cute. They’re wrong, of course, but that’s their problem. Whether or not you’re down with being referred to as an infant during sex, there’s just something very porn-esque about being called “baby” mid-blow jay.

2. “What do you want me to do to you?”
Ugh. Assure me I’m beautiful? Commit to a life together? Give me an orgasm? I get it, I get it. This question is great for consent, so I can’t hate on it too much. But when your boyfriend, or FWB, or whoever is crushing you with his giant man body and breathing on you with beer breath, is asking what you want, you’d wish he’d just get to the main event already. Don’t beat around the bush (or lack thereof). What do you want? Oral. Always oral. What does he expect you to say? Butt stuff?

5. “You filthy slut, you nasty whore.”
In the E! version of Sex and the City, this is what that one guy said to Charlotte whenever he finished (in the real version it’s, “you fucking bitch, you fucking whore,” just FYI). Basically, some guys think that calling girls any sort of derogatory name is hot. And I get it. Different vagina strokes for different folks. For some of us, however, the mere thought of him calling you a “fucking slut” while he’s balls deep in your lady flower is enough to make you sob like you just saw a Subaru commercial.

6. “You’re so tight.”
Oh, GOD. If there’s ever a phrase that will make you want to remove the dick from inside your body and turn your life over to a convent, it’s this bad boy. What does he expect? To be able to cartwheel into my vagina? And what do I say? “Thanks? I get that a lot?”

7. “What was that noise? It’s okay. I think it’s hot.”
That noise was from my vagina. And no. It was not hot. The polite thing to do would have been to pretend this never happened and then kill me to put me out of my misery.

8. “You’re so wet.”
I know this is supposed to be a compliment. Like “you’re so turned on, great job letting your normal bodily reflexes take over.” The only problem is that when it comes out of a guy’s mouth, it instantly makes you feel like a low-class sex worker. Yes, you’re wet. Because you’re no longer taking birth control (which makes you dry as a fucking desert) and he’s nibbling on your neck. It’s not so much a compliment to you as it is to himself.

10. “Do you like that?”
Most of the time when guys ask this, they’re not so much asking as they are telling you. There’s only one real response here: awkwardly mumbling “yeah” and avoiding eye contact forever.

11. “You like that dick?”
I really sort of did until your unfortunate decision to ask me about it. Were my over-the-top groans not enough? Don’t make me give you a five-part essay about why I like your penis, outlining three main points (size, cleanliness, and longevity of use) with a bomb intro and thought-provoking conclusion. Your dick is inside of me. Isn’t that enough?

13. “Come for me.”
You just destroyed the slight, 15 percent chance I had of orgasming. Girls can’t just come on command. We have to finish mentally planning our meals, wondering what’s going to happen next in The Mindy Project, trying to decide if you’re fantasizing about your ex-girlfriend, and daydreaming about Chris Hemsworth before we even have a shot at getting off. Five minutes in when you’re ready to pop off is not the time to ask us to come. Actually, never is the time to ask us to come.

14. “Who’s your daddy.”
His name is Richard. He’s a CPA. He and my mother still live in the same house I grew up in and I have cliché speakerphone conversations (you know, the ones where mom doesn’t know how to turn on “The Speakerphone” and dad keeps leaving the room to get a beer) with them at least once a week. Now kindly, kindly go fuck yourself.

15. “Call me daddy.”
No, I will not call you “daddy.” But since you insist on being treated like my father, how about you throw some money my way and I’ll avoid your calls until my bank account runs dry again, okay?

16. “Do you want to just blow me?”
Yes. After seven minutes of awkward sex that I was obviously not that into, what I want is to get out of this comfortable bed, put my knees on the cold, dirty floor and suck on your haven’t-showered-since-early-this-morning penis. How’d ya know?

18. *head push*
You know what they say, actions speak louder than words.

After much consideration, I realized that it’s better for guys to just say nothing to us in bed. But if you insist, how about you just stick to assuring us that we’re the prettiest girl in the world and that the pizza is on its way. 10/10 will work every time..