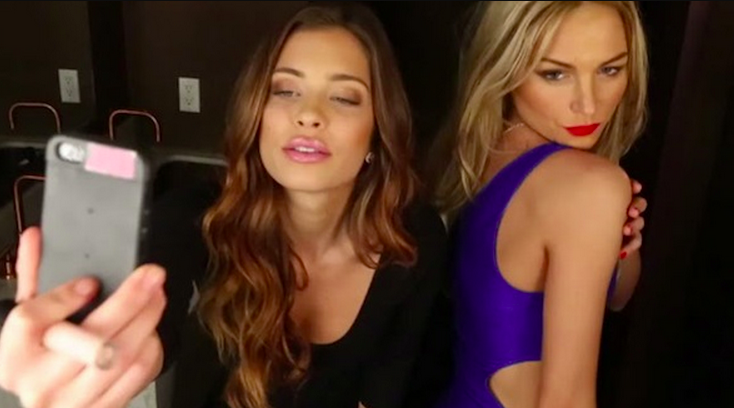 I thought it couldn’t get worse than #NationalBoyfriendDay. I mean, scrolling along seeing lame couple after lame couple flaunting their love on social media is enough to make anyone go all Eat Pray Love and swear off “happy” people forever. But no. It got worse. The National Whatever days have gotten out of control. On National Pizza Day we’re forced to see skinny girls hold up pieces of pizza like we don’t routinely order a large for ourselves and cry. National Doughnut Day? Everyone posted doughnuts they either didn’t eat or ate and then complained about how *bad* they were after. National Show Your Pussy To Someone Random Day? Well, that day got real weird, real fast.

Still, easily the worst day is upon us. Worst than National Get Your Junk Tested Day and National Text The Ex Who Broke Your Heart Day. National Selfie Day is the one day a year when we can’t go on social media without wanting to punch the shit out of our closest friends. I get *why* people post selfies today. All of us uggos who are too scared to ever post one get excited because now we finally have an excuse to show people that we’re actually swans, not hideous ducklings! Still, seeing a selfie on a normal day is brutal. Having your whole feed filled with them? It’s like the apocalypse. Here’s what you can expect if you decide to brave the disturbing world of IG today.

The Tongue Out Selfie

You know what? If you shoot for the moon and you miss, you don’t land amongst the stars. You’ll die. Combust. Turn into dust or blow up from gravity. I’m not entirely sure of the science of space, and I’m solely basing this off of the movies with Sandra Bullock and Matthew McConaughey, but still. Missing when shooting for the moon means you’re a fucking goner. Posting an inspirational quote under your stupid face actually makes me hope you miss when shooting for the moon because dear God, it’s insufferable. Still, if I’m lucky enough to know you at your best, I should gift you a pity double tap at your worst, right? Wrong.

Whether this looks like a normal selfie with some cleavage thrown in, or maybe a casual side view where an ass is being pushed out so far it’ll inflict scoliosis — this is not casual. Even though this girl is pretending that she had no idea she was casually flaunting some t&a, the bitch knew. The best part is because she doesn’t fully own her attempted hotness, she’ll have to resort to a caption that will make you want to report her account for lame content. Odds are, it’ll be an inspirational quote. Odds are, you won’t feel inspired.

On one hand, this girl is a relief because she knows she’s hot. She flaunts her perfectly contoured face, pornstar lips, inflated tits and Kardashian ass with so much confidence, you instantly want to be her. After your head clears and you delete your searches of “plastic surgeons near me that accept crafts in exchange for boob jobs,” you sort of hate her. And by sort of, I mean she’s the worst. If this was the first hot selfie of hers you’d ever seen, you’d consider giving her a like. But one glance at her profile proves that her entire aesthetic is just herself.

Whether she lives at the gym or just decided to take a tour, the gym selfie is meant for one thing and one thing only: to make everyone else feel like human garbage cans. Maybe she waited until National Selfie Day because she also thinks gym selfies are douchey, but she wants people to know that she actually works out. Maybe this is her first day there, and she honestly only went because it’s the closest Smoothie King. Either way, seeing her in her overpriced workout gear and face full of makeup that you hope will make her breakout, the Gym Selfie is not only assholic, it’s just plain pathetic. And no, I’m not just hating because I haven’t gone to the gym since I was a sophomore. In high school.

I’m not sure how this became a selfie, but alas, it has. Nowadays, anytime we get half an inch cut off of our heads, we need everyone to compliment us. It’s one thing if we dyed it a different color and chopped it all off. But the fact that your blonde hair used to reach below your boobs and now reaches your nipples is not Instagram-worthy. If you dare post one of these on a day centering around selfies, don’t be surprised when your likes ratio plummets. Still, OMG girl, the .25 inches you got cut off looks sooooooooo good (comment & like back plz).

For this girl, every day is National Selfie Day. She’s not posting a picture of her fish gape face and t-rex arm because it’s a made-up holiday on social media. She’s posting it because what else would she post? A quick peek at her entire gram proves that if her face isn’t in it, she’s not posting it. The fact that you still follow her shows that you’re a much nicer person, and weaker, person than the rest of us. Give her a like if you want, but don’t be surprised when she doesn’t notice. She’s too distracted by staring at her face to see how many people are (or more likely aren’t) looking at it with her.

Between the painful lighting, the unflattering angle, the lack of anything sexual, and the non-ironic caption, it’s obvious that this girl doesn’t spend a fourth of her life seeking natural light and wasting all of the storage on her phone for solo shots like the rest of us. Maybe she’s not good at Instagram or maybe she just thought that this picture would suddenly get tons of likes and turn her into a model. Either way, she means well. And while I’d love to make fun of her, that’s not fair. She’s just a simple girl with simple dreams who doesn’t quite understand how things work. While she does deserve our pity, she most certainly does not deserve our likes. The girl’s gotta learn someday, right?

If you want to post a selfie, who am I to stop you? But if you chose to post one on National Selfie Day, you deserve the less-than-normal likes you’re going to receive. JS..