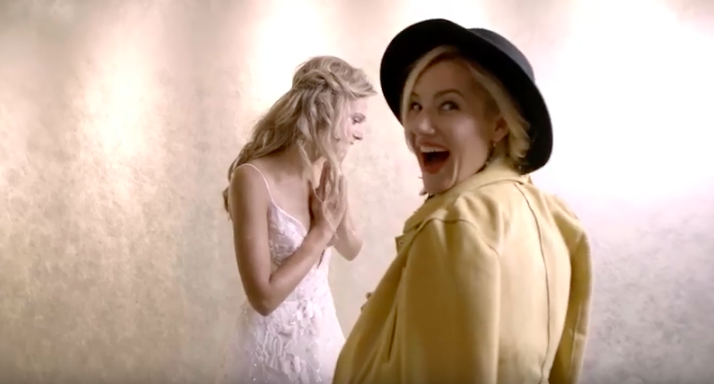 For some of us, from the day we waltzed out of the womb we had a deep, burning desire to really make something of ourselves. We wanted to wow the world with our talents, save lives, and make a difference. For others, our goals weren’t quite as lofty. We wanted to be pretty. We wanted to be popular. And we wanted to have the dream wedding someday, whether it was a marriage for love or money. Obviously, some girls wanted a little bit of both. This isn’t mutually exclusive. But it turns out, I’m just talking about myself here (when am I not?), and as for me, I’ve been firmly planted in group two since I was a zygote.

So, naturally, I’ve devoured every wedding movie, book, and TV show out there, and to this day my favorite has always been “Say Yes to the Dress.” Randy’s sass? Spoiled girls with no budgets? Ugly ass gowns that should be burned and not sold? Ugh. GIVE ME ALL OF IT. I never thought there would be a better show. I mean, how could you top it? And then, Hayley Paige came into the picture.

Now, if you don’t know who Hayley Paige is, you’re going to real soon. Because if you, your friends, or anyone in your life is getting married sometime, she’s going to be the designer you talk about in coveted whisperers much like we used to with Vera. What’s so great about her? Not only are her gowns the trendiest, sparkliest, most gorgeous effing things you’ve ever seen, but Hayley herself is quite possibly the cutest human. She’s young (like, younggggg), so young, in fact, that her line dropped in 2011 when she was just 25. Plus, she’s annoyingly pretty, absurdly cool, and gives off major Ke$ha vibes. Don’t believe me? Check this ish.

And, as you can see, TLC realized just how fab she was and scooped her up. Anyone else feel like they’re watching the wedding-infused “Sex and the City Movie?” New episodes of her show, “Hayley Ever After” can be found on their Facebook page, with a special, hour-long episode being aired on TLC. Trust me, you won’t want to miss it. From JLM Couture:

I’m sorry, “The Bachelorette” meets a wedding dress show? Is this heaven? You can watch the rest of the episodes on their Facebook page by clicking here. Oh, and Hayley? If you’re looking to give away a free gown (or at least a heavily discounted one), I know a bitch who’s getting married next year and would totally sell her soul/body/firstborn child for The West gown.*