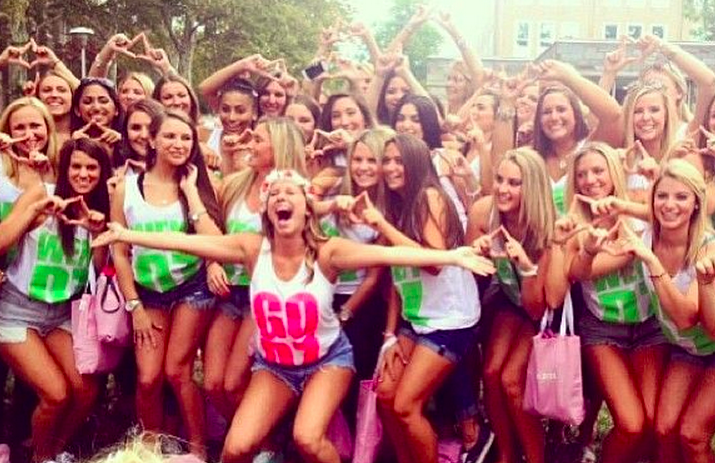 It’s a debate that has raged on since fraternities and sororities first came to be: which school has the best Greek life? We all like to think our school is the best, the loudest, the biggest, but I’m here to finally lay to rest the rumors and the gossip. I carefully compiled a list of schools with a banging Greek reputation and ranked them based on a number of very scientific factors.

By the power vested in me as an employee of TSM/TFM for almost three years, here are the top 25 schools with the best Greek life.

I’ll be honest, I’m only adding this to the list because Delta Gamma at Virginia Tech made the best recruitment video of all time and they deserve some credit for it. Here’s a refresher in case you forgot:

75 percent of the campus is involved in the Greek system, making DePauw one of the most Greek universities in the country. Basically, if you’re not in Greek life, at DePauw, you’re a nobody.

The TED talk about eating disorders given by a sorority woman from SMU is all the proof I need to tell you that SMU Greek life is awesome and does amazing things for their community.

Mizzou has had their own problems this past year, but that’s not what this is about. Mizzou Greek life is bomb. I have it on good authority (AKA Rob Fox telling me almost every day that Mizzou is awesome and my school could never compare) that Mizzou is one of the greatest party schools in the country. Yeah, they’ve taken a few hits this year, but Greeks are resilient and they’re not going to let some drama get in the way of their drinking. I respect that.

The Greek community makes up about 22 percent of the undergraduate population at LSU. Greeks at LSU have good football, good food, and some of the best parties the south has to offer.

Indiana consistently kills it with recruitment videos. Here are a few favorites.

Beautiful Charlottesville is home to the fraternity scandal that rocked the nation over the past two years, but don’t get it twisted — UVA is more than what “Jackie” made it out to be. It’s perched perfectly between the North and the South, which allows UVA to have the best of both worlds. Nearly 30 percent of the student body goes Greek, and for good reason. Greeks compelte nearly 56,000 hours of community service and contribute more than $400,000 to different charities.

USC is right smack dab in the middle of sunny Los Angeles, which has led to more than a few run-ins with celebrities — like the time Beyoncé stopped by or the time Justin Bieber bought a round of shots for some college kids at a bar near campus. I’m so jealous.

I really hesitated putting Texas Tech this close to the top because Lubbock is where dreams go to die. The only reason Lubbock sucks slightly less is because Greek life runs the damn place. It’s big, it’s in your face, and it’s in the middle of nowhere, which is the mark of a great college town. The houses are big and they’re only getting bigger. They’re big on football, too, but I think the best thing about Lubbock athletics is their football coach, Kliff Kingsbury. He’s like a cross between Ryan Gosling and someone else really hot. Bottom line: if you have to be in Lubbock, it’s better to be Greek.

The houses at Arkansas are insane. Their Greek row takes a shit on every other major university’s Greek row. Take a drive up and down Greek row and you’ll see what I mean.

And then there’s this:

Penn State basically invented philanthropy. They raised $9 million this year alone at their annual THON. They take their philanthropy seriously — almost as seriously as they take their Greek life. I’ve heard Penn State boasts an incredible 50 fraternities, which is big if true. One of those fraternities even has a really adorable goat, if you’re into that kind of thing. Their parties don’t suck, either. All in all, Penn State is where it’s at if you want to party but also make a huge difference in the world.

Greek life at Ole Miss is huge, like their large, plantation-style houses. It’s probably the most stereotypically Southern college on this list, which is why they get a ton of students from Texas to Florida. Ole Miss is old-fashioned in the best way, and if you’re a true Southerner, you probably want to go here.

Tuscaloosa is where every college student’s dreams come true. It is the most “college” city in the world. Alabama might be a destitute wasteland everywhere else, but they know how to have fun. Bama proudly hosts 29 IFC fraternities and 18 Panhellenic sororities, so you can take you pick. And their houses? Huge. Enormous. Just take a look at Kappa Delta’s house. I couldn’t tell you the difference between a first down and a sack, but I can tailgate the shit out of a football game. Bama students have it all: huge houses, huge Greek life, and huge school spirit, which is why they win the coveted title of the school with the best Greek life.

[sources via Niche, US News]