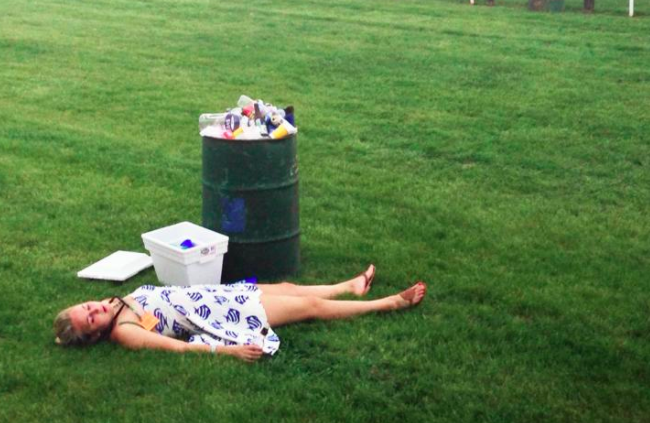 Coming into senior year is a beautiful thing. Especially if you’re doing it for the first time, (shoutout to them super senior sisters). The pressure to make your last year your best year is both exciting and addictive, which is why you’re probably already memorizing senior bucket lists and are preparing your wallet, liver and vagina for the whirlwind of a year you’re about to have. Go out there. Do it. Have the time of your life. Except if you’ve been living like this all four years because maybe you need to sit the fuck down.

This isn’t for the normies. The ones who have had one night stands and crazy nights, but have always managed to keep their GPAs up. This is for the hot mess expresses. The girls who think “happily devoted boyfriend of another girl” is synonymous with “fun challenge.” The girls who you don’t even necessarily want to go out with anymore because they were already drunk this morning during your 8am.

These girls will use senior year as a way to justify their behavior. Which, normally, you do you boo boo. But now it’s actually become a problem. Like hey, we all like to let loose. We all probably drink a lot more than we’re supposed to and we’ve done impure things with some off limits guys. But these girls live for it.

I get there are girls who just love having sex and having it with a lot of people. I am one of them. The difference is it’s not a source of confidence. When we first got to college, we feel the need to compete for male attention and will do whatever it takes to get it. In a year or two, we start to realize that hollow attraction isn’t necessarily filling that need. That’s when we start dating, prioritizing our friends and studies, and hooking up with guys because we’re carefree, not because our happiness depends on it.

Then, senior year, we celebrate our one last hoorah by bagging an underclassmen and getting sloppy drunk at a bar we haven’t been to since we actually turned 21. This is great. This is what should be encouraged because we fucking earned it.

But those girls who never slowed down once? No. They did not earn it. “Freshman year slutty” was not a phase, it’s just, like, who they are. Like, they’re out here joining our conversation about reliving the glory days as if last week they didn’t suck off some random 18-year-old in a public hot tub Jersey Shore style. No, Jessica. Maybe you should take a god damn break and let us have our moment. The reason you had to cut back your binge drinking to four nights a week is because you were involved in your school and your classes stopped being a joke. But Jessica, out here with her glorified arts and crafts degree, is stealing your thunder.

I guess at the end of the day it doesn’t really matter. Maybe you’re just in a bad mood because you haven’t gotten laid in a year. Either way, bring in the boys..